What are the Factors Driving the Demand for the Maple Water Market?

Escalation in health trend of increased low-calorie beverage intake is the crucial factor that has amplified the growth of the global maple water market. Maple water contains bioactive compounds and electrolytes, which help the body to recover. Furthermore, it serves as an ideal choice to hydrate the body after workout.

Swelling intake of low-calorie beverages by consumers is also leading to a rise in maple water consumption as an alternative to fruit juices and sports drinks. Besides, the mounting health consciousness among the masses is providing a thrust to the market growth. With changing lifestyles and dietary habits, there is a snowballing preference for organic and plant-based beverages instead of carbonated drinks, juices and sparkling drinks. Consumers across the globe are also looking for great tasting beverages with an attractive nutritional profile.

Maple water is also considered a medicinal beverage in countries such as South Korea and Russia. According to the International Maple Institute Report, maple syrup production capacity in the US is likely to reach 1 million taps in the coming years.

What are the Key Market Trends & Growth Opportunities in Maple Water Market?

With consumers being more effortlessly vended now on healthy and organic drinks, the prospects of the global maple water market are projected to be bright. Moreover, Drink Maple- a key player has recently launched its maple water in SIG Combibloc’s wood-based carton packs, extending the brand’s range of packaging options. This will enhance the sustainability and reduce the impact of plastic packaging by replacing it.

By virtue of naturally being a dairy-free, gluten-free, vegan, and low-calorie drink, maple water carries the potential to appeal to a wide consumer base. Another prominent player, Maple Guild has launched a line of enhanced maple water, by using dehydrated base of sap for the traditional steam evaporation process which augments its ingredients and flavor.

Additionally, with the growing consumer interest in natural and non-aerated/carbonated drinks, the global beverage industry remains in a state of flux. This has opened countless opportunities for the advent of newer, healthier beverages. At the same time, dietary choices such as veganism and gluten-free are instigating businesses to bring about stable yet evident changes to their product portfolios. This trend will directly impact the course of the global maple water market.

Why Does North America have a Prominent Hand in Driving the Maple Water Market?

Recently, the trend of maple water has spearheaded the market of North America and the trend is expected to continue over the forecast period. Prominent players in the region believes that the maple water can be as big as the coconut water which currently accounts for nearly 75-80% share of the plant water category by volume and dollar sales, according to Beverage Marketing Corporation.

On account of growing demand for maple products, the producers are concentrating on increasing the production capacity using efficient technologies. This is likely to put downward pressure on the price of maple water as the supply expands. Sapsucker, an organic carbonated maple water brand based in Canada, is planning a 2021 launch into the US market after being launched successfully in Toronto in 2020. Additionally, maple syrup, a product derived from maple water is witnessing increasing demand from baking and confectionery industries in North America.

The increasing demand for sugar alternatives and convenience food products in North America is leading to the rise in production and consumption of maple water. Increase in growth and plantation of sugar maple tree across eastern Canada and the north eastern U.S is also driving maple water consumption in the region. As per Fact.MR, around 55% of maple water sales will likely occur across North America.

Why Maple Water is Observing Escalating Demand in Asia?

In Asia, the popularity of maple water is sluggishly aggregating and it will still be a few years before both awareness and sales of maple water pick up. However, once that happens, these markets, with densely populated urban pockets and an increasingly affluent consumer base, could be extremely lucrative for companies in the maple water market.

Though companies selling maple water spot its many natural nutrients as the key USP, there isn’t a substantial body of scientific evidence yet to back those claims. Moreover, the premium pricing could put it out of the reach of several consumers in cost-sensitive markets.

Also, manufacturers are fortifying maple water with vitamins, minerals, amino acids, and herbs to boost its sales. Due to the anti-inflammatory and hepatoprotective activities of the species, Plants of the genus Acer (Aceraceae)-commonly known as maple-have been used extensively in the traditional treatment of various diseases in East Asia. Moreover, the sap of maple is traditionally being drunk in order to strengthen bones. A market share worth 45% is projected for the Asian market. 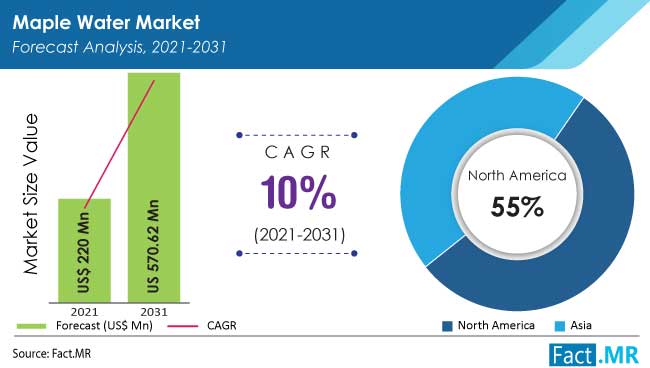 Which Type of Flavor is Highly Preferred in Maple Water Market?

According to Fact.MR, unflavoured maple water exceeded 13 million litres in volume demand as of 2020. An increasing number of food manufacturers and restaurants are using maple water in its natural and unflavoured form.

Majority of the companies in the water bottled space are focusing on providing pure sparkling water. With an idea to offer something innovative and attract big chunk of health-conscious customers, companies are planning to bottle the maple water obtained from maple tree in its natural flavor, thereby, preserving the nutrients in maple water with sweet and woody taste.

Which Sales Channel is Mostly Preferred in Maple Water Market?

The existing players in the maple water market are providing packaged maple water that can be sold through giant stores including hypermarket and supermarket. Moreover, the target consumers buying products like maple syrup mostly belong to upper middle class and high class with the focus on healthy lifestyle. This is resulting in manufacturers distributing their product through the modern trade sales channel.

Prominent manufacturers are finding sustainable solutions to reduce the adverse impact of plastic packaging and for cutting cost by considering tetra packs. For instance, the makers of Drinkmaple have recently brought organic plant hydration to U.S. consumers in combidome cartons, the first of its kind in this packaging solution. The composite from which the entire carton pack is made, from the base to the eye-catching yet practical dome, contains around 75% paper board, which is made from renewable raw wood material.

What is the present worth of the maple water market?

At what rate will the market for maple water close in by 2021-end?

What is the anticipated market value for maple water by 2031-end?

How opportunistic is the maple water market likely to be in North America?

Do prospects for maple water consumption appear bright across Asia?

According to Fact.MR’s projections, maple water sales in Asia will likely accrue 45% of global revenue

Which is the most preferred maple water flavor?

Demand for unflavoured maple water is likely to surge, selling 13 million litres as of 2020

Which is the most preferred sales channel for maple water?