Birch Water: The Next Super Drink, or a Mere Fad?

Birch water is not a new concept, rather it has been long known for its medicinal properties and highly popular in parts of China, Eastern Europe, and Canada. Rapid transition toward natural ingredients is a key factor that is estimated to provide fillip to the consumption of birch water through 2029.

Changing dietary patterns among consumers is marking the begging of a new era wherein nutrition will become the most important consideration. Europe and North America are expected to remain two of the leading markets for birch water, offering new opportunities for market players to expand their footprint.

Historically, the birch water market growth in East Asia and Oceania region is surprisingly healthy, and the growth is expected to remain stable during the forecast period.

Birch water market growth in South Asia is relatively mature and is experiencing steady growth over the forecast period. Demand for birch water in emerging countries has also been rising, however, the high price of birch water is likely to hold back its adoption across price sensitive markets. 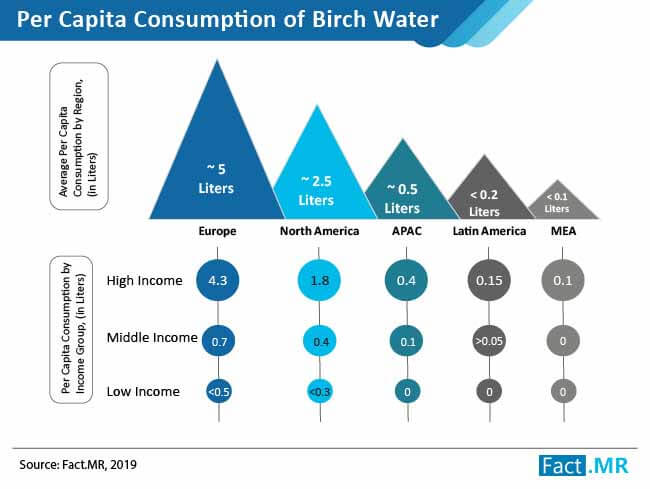 Higher levels of manganese and minerals attest its health-benefiting properties of birch water, thereby solidifying its relevance for multiple end use applications, including pharmaceuticals, cosmetics, and beverages. Naturally available xylitol is further fueling the demand for birch water in the nutrition beverage industry at a greater extent. 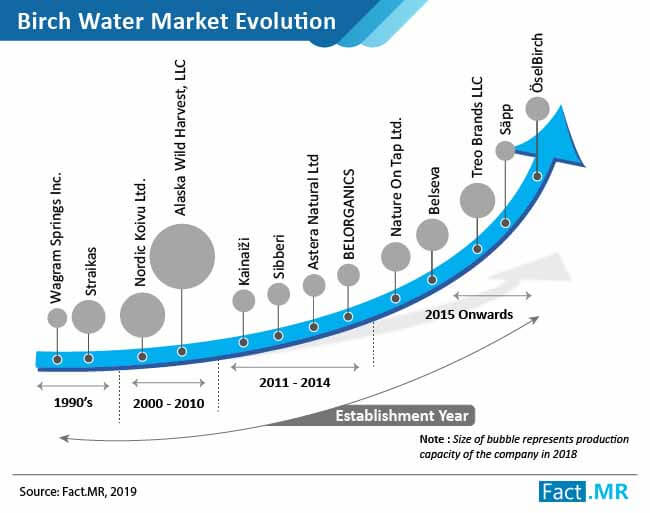 Further, many companies offer birch water in glass bottles as it conserves the purity and taste of the birch water for a long time. Emerging companies have developed suitable tetra packaging for birch water to increase the convenience of consumers. Moreover, manufacturers are focusing on introducing various flavors to make birch water more delicious, colorful, and interesting, with an objective of boosting the aesthetic aspects for consumers.

The manufactures have to invest in a storage tank to store birch water. Furthermore, the extracted birch water has to be processed to keep the flavor alive for a longer time.

As per the current scenario, many companies, mainly from Canada, are adopting vacuum tubing technique to gather two to three times more sap from the birch tree.

According to a study conducted by Northern NY Agricultural Development Program, using vacuum technique can increase the production capacity of birch water by 20%. Several startup companies are purchasing unflavored or raw birch water from companies like Straikas and Nordic Koivu Ltd. for producing flavored birch water

Tapping into the Untapped: Developing Countries to Become the Next Big Target

Emerging and prominent players in birch water have an opportunity to increase their market share of birch water globally by organizing awareness campaigns and other marketing strategies.

Birch water market growth in South America, Middle East & Africa, and Latin America is relatively slow. By targeting the population in the aforementioned regions, the manufactures will get ample opportunities to boost their overall market standing.

Europe: The Gold Mine of Opportunities

Rising per capita consumption of alternative water is likely to increase the demand for birch water in the region. The Europe market for birch water is estimated to create an incremental opportunity of ~5.1X during the forecast period.

The demand for flavored natural/organic beverages which offers various health benefits is boosting the market growth in Europe, offering ample opportunities for market players to revise their growth strategies and use them in the right direction.

What is the CAGR for birch water market?

The global birch water market is anticipated to grow at a CAGR of 16%,

What is the estimated global demand for birch water market over the forecasted period?

Incremental opportunity of 5.1x during the forecast period.