As global airline traffic continues to soar, a vast array of opportunities for automated weather observing system (AWOS) will be foreseen in the coming years.

Global passenger traffic for 2018 rose by a healthy 6.5% as compared to 2017, which is more than the average annual growth of the last ten years, i.e. 5.5%., as per the International Air Transport Association (IATA). These numbers are expected to witness an upward trend in the coming years and calls for enhanced safety systems such as AWOS. The world has witnessed significant instances of airline crashes due to adverse weather conditions over the past decade.

As of 2019, a study by National Transportation Safety Board (NTSB), US has depicted that over two thirds of the total weather related aviation crashes have proved to be fatal. Thus, pertaining to the above and many more aircraft accidents, the airport authorities are continuously striving towards the deployment of reliable automated weather reporting systems.

Automated Weather observing systems (AWOS) is gaining attention of most of the airport authorities for the purpose of determining correct weather conditions while planning for take-offs or scheduling number of flights.

Furthermore, demand for increasing the runway capacity & airport efficiency coupled with array of advantages offered by AWOS configuration and re alignment of strategies by key players are some of the factors boosting the market growth. With this, the global AWOS market is bound to rise with a CAGR of nearly 5% over the assessment period.

From the regional perspective, North America has registered its lead within the AWOS market, claiming 45% of the market share in 2019. Robust airport infrastructure paired with high investments are providing traction to the regional market. However, owing to the resurgent Indian, Chinese and MEA markets, North America is expected to drop considerable market share till 2029.

Announced investments for new airport development, up gradation of the existing ones coupled with increasing air traffic are some of the prime factors pushing the Asia AWOS market over the forecast period. China would replace the U.S. as the largest aviation market by 2037. The other regional powerhouse, India, would jump to third position by 2037.

Furthermore, Government of India is planning to build around 100 new airports by 2024. On the other hand, as of 2017, Chinese government announced plans to spend US$ 11.7 Bn to construct 66 new civil airports over the following five years. Other than these, numerous airport programs across countries such as Indonesia, Thailand and Malaysia also tend to create wide deployment pool for AWOS market. 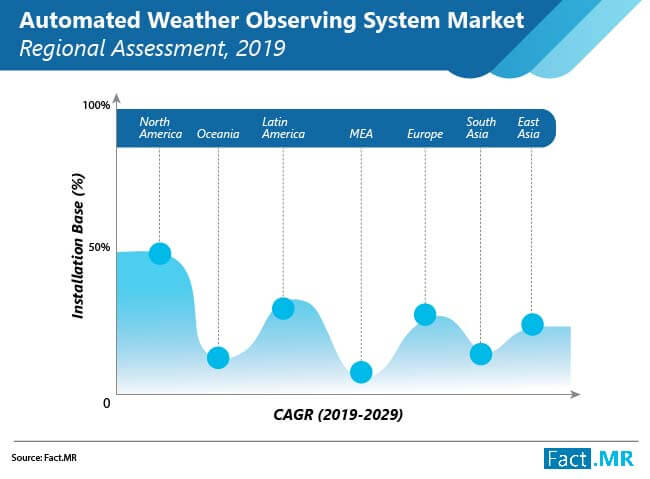 Vaisala Inc., Optical Scientific, Inc., All Weather, Inc., Mesotech International and Coastal Environmental Systems are amongst the top vendors that have managed to hold over three fourth of the market share in 2019.

These players are focusing on establishing long term contracts with government and military organizations. Along with this, the vendors are also emphasizing on price corrections to curb the high cost of AWOS. For instance, OSI announced lower cost AWOS AV as an alternative to FAA AWOS.

These new OSI AWOS will meet the requirement of IFR and GPS approaches in less than US$ 100,000 capital investment.

Such strategies are anticipated to be undertaken by Tier 1 players over the near future in order to strengthen their hold within the market. This would increase the level of competition amongst AWOS vendors through which the bargaining power of buyers would be on the higher side. This in turn will increase the installation of AWOS at airports worldwide, thereby driving the market growth. 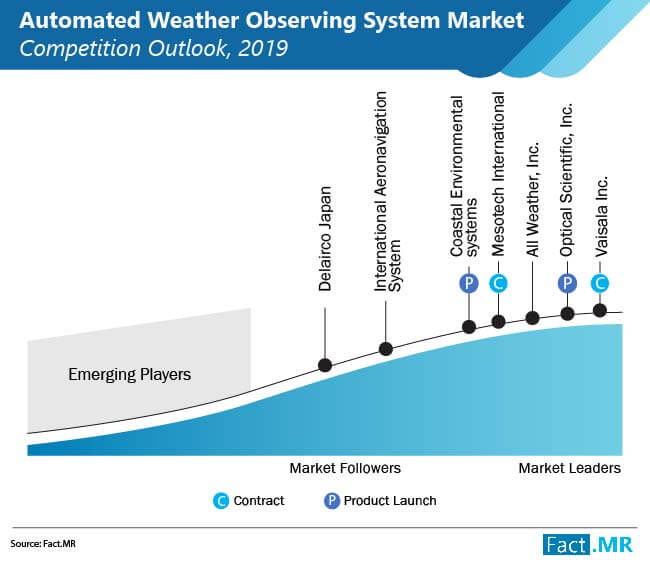 Fact.MR has studied the AWOS market with detailed segmentation on the basis of configuration, system type, procurement model, deployment location and key regions.

North America is expected to Drive Most Henequen Demand