Riflescope aids in enhancing vision and improves accuracy as this telescopic vision is usually attached on the top of rifle. This not only increases rifle range but also helps in taking longer shots. As riflescope finds its enhanced application in both commercial and armed forces usage along with fulfilling hunting purposes, the escalated demand is likely to provide a gain of 110 BPS to the riflescope market in coming years.

Additionally, manufacturers in the market are focusing on launching high-quality riflescopes with numerous features and multiple applications. They are introducing in-built laser range finder to optimize accuracy. They are also offering smart shooting solutions such as smart rangefinder, magnification, etc. to provide direct vision. This is estimated to support market growth by 1.7X in coming years.

Moreover, the enhanced investments in military markets to provide defense services is encouraging riflescope market. The use of riflescope in sports like hunting and shooting are the chief driving factors in the forecast period.

Precision is of paramount importance in military, wherein soldiers guarding borders or those on missions can easily spot targets with rifles with high precision. The technology has evolved in the market with RAZAR technology or Rapid Adaptive Zoom for Assault Rifles technology enabling toggling between high and low magnifications without removing eyes from the targets or hands from rifles at just a push of a button.

In addition to this, the opportunities in the market have also increased because of the augmented adoption of different variants of riflescopes at different platforms. The integration of weapon systems is estimated to boost the market growth by

In addition to this, the opportunities in the market have also increased because of the augmented adoption of different variants of riflescopes at different platforms. The integration of weapon systems is estimated to boost the market growth by 1.3X over the assessment period of 2022-2032.

Riflescopes are used to hunt animals to control their population in countries like New Zealand and Australia. However, in countries like India, owing to the strict regulations concerning the hunting of species is banned. Other countries like Botswana, Zambia, Africa, Costa Rica have also banned hunting of animals, as numerous animal species are on the verge of extinction or are being declared endangered.

Therefore, the ban on hunting activities on animals is likely to impact riflescope market growth negatively. The above factors are expected to restrict or hamper market growth and demand by 0.8X during the forecast years of 2022-2032.

Which region accounts for more enhanced demand for Riflescope Market?

What is the market scenario in East Asia and South Asia & Oceania Riflescope Market?

The escalating consumption of sniper and assault rifles coupled with high domestic production base in the defense sector is likely to drive the market for riflescopes. Moreover, defense departments focusing more on sectors which are of high importance to national security are escalating their defense spending, which is likely to support market demand in the regions in coming years. 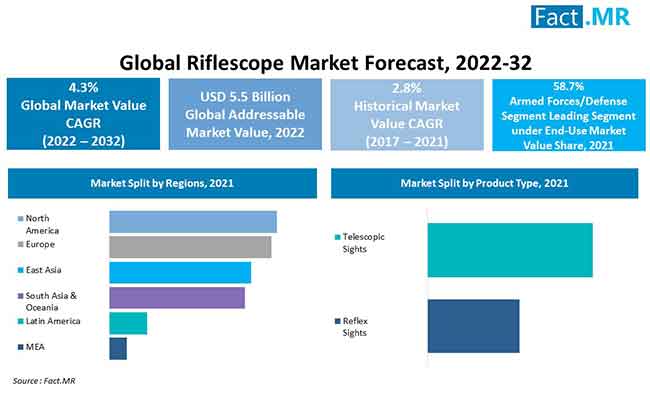 Which product type holds dominant market share and is likely to show higher growth in Riflescope Market over the assessment period?

The riflescope under product type is segmented into telescopic sights, and reflex sights. The telescopic sights is the leading segment by holding 64.3% of the riflescope market and is projected to register a CAGR of 4.7%. These sights are loaded with different forms of graphic imaging pattern installed in the optical equipment with patterned reticles to offer accurate point aiming. Thus, the segment is expected to register higher growth than reflex sights. The next segment reflex sights holds 35.7% of the market share and is projected to grow at a CAGR of 3.8% during the forecast years of 2022-2032.

Which end-use segment is estimated to support market growth in the Riflescope Market during the forecast period?

Under the end-use segment, the riflescope market is segmented into commercial and armed forces/defense. The armed forces/defense segment holds 58.7% of the overall market and is projected to witness growth of 4.9% in coming years. The military modernization programs in different countries, especially developing countries replacing conventional rifles with new assault rifles with advanced riflescopes is driving demand for riflescopes under this segment. Whilst the commercial segment holds 41.3% of the market share and is projected to grow at a CAGR of 3.6% over the assessment period.

The global riflescope market is highly fragmented and competitive owing to the existence of many domestic and regional players. Various marketing strategies are adopted by key players such as mergers and acquisitions, expansions, collaborations and partnerships.

Also, new product development as a strategic approach is adopted by the leading companies to upscale their market presence among consumers. These strategies have resulted in the manufacturing of riflescope.

The global value of riflescope market is estimated to be worth over USD 5.5 Billion in 2022.

The demand is anticipated to surpass USD 8.4 Billion by 2032 end.

Telescopic sights riflescope under the product type contributes 64.3% of market share in global sales of riflescope.