The global well intervention market, the market is gaining traction steadily and is expected to ascend at around 6% CAGR through 2031, exceeding a valuation of around US$ 7.1 Bn by 2021.The market is projected to reach US$ 14 Bn by the end of 2031.

As per Fact.MR – market research and competitive intelligence provider, during the historic period of 2016 to 2020, the market expanded at a CAGR of nearly 6%, attributed to the increasing need to revamp and refurbish existing oilfields.

A well intervention is any remedial operation performed on oil or gas wells with the intention of restoring or increasing the production. It was traditionally done with drill rigs, but with significant advancements in technologies, well construction and well head designs have transformed, influencing well intervention to evolve as well as grow in demand.  An oil or gas well may require intervention due to a number of unforeseen problems such as changes in reservoir characteristics, flow restrictions, mechanical failure, and others.

Rising demand for energy along with growing efforts in discovery of new oilfield reserves has been highly impactful on the development of global market of well intervention. Considering the aforementioned factors, the market for well intervention is projected to reach US$ 14 Bn by the end of the forecast period (2021-2031).

Large-stage well intervention solutions and services are gaining momentum due to increasing expenditure in revitalization of aging, marginal field wells in order to improve their functioning and extend production.

Exploration and production (E&P) companies or oilfield operators across the world are focusing on boosting production and extending the plateau which require a clear understanding of the subsurface quality and performance of the existing surface facilities to manage the production in a safe manner. This, in turn, is likely to trigger investments in these services and eventually strengthen the well intervention market growth.

Although renewable sources of energy are widely being adopted in the recent years, the demand for oil and gas has not declined, especially in the emerging economies. For instance, according to IEA (India Energy Outlook 2021), primary energy demand is expected to nearly double to 1,123 million tons of oil equivalent, as the country's gross domestic product (GDP) is expected to increase to USD 8.6 trillion by 2040.

Renewable energy provides clean power, but it is yet to become the reliable source for the continuously developing and modernizing society, and therefore resulting into surge in the demand for oil and gas. With rapid depletion of oils reserves, continuous efforts are being undertaken for the discovery of new oilfield reserves, mostly in the Persian Gulf, Gulf of Mexico, South China Sea, and the North Sea, to meet the soaring demand. These are the important factors driving the global market for well intervention services.

What are the Possible Restraints in the Market?

According to Fact.MR, heightened volatility of oil prices and heavy investments in renewable energy sources are projected to impede market growth. Various global well intervention projects have been halted due to fluctuating prices of crude oil.

In addition, the growing need to adhere to government regulations regarding carbon emission has triggered robust investments in renewable energy business including wind and solar power technologies. Rising inclination toward clean energy may negatively affect the growth of well intervention market at the global level.

How is the Market for Well Intervention Faring in the U.S?

The U.S. dominates the market owing to the increasing exploration of shale reserves and oil and gas projects, presence of more than a million production wells, implementation of stringent wastewater treatment policies for oil and gas and mining industries, growth in the construction industry, and expansion of industrial infrastructure.

The country has discovered a large number of oil refineries in the past few years. In September 2021, U.S. oil major Exxon Mobil Corp. made a discovery at Pinktail in the Stabroek Block offshore Guyana, as it develops a major new oil and gas find. Exxon operates the 6.6-million-acre Stabroek Block as part of a consortium that includes Hess Corp and China's CNOOC Ltd. It has made at least 20 discoveries there.

According to the US Energy Information Administration, as of January 1, 2021, there were 129 operable petroleum refineries in the United States. The newest refinery in the United States is the Targa Resources Corporation's 35,000 barrels per calendar day (b/cd) condensate splitter in Channelview, Texas, which began operating in 2019. Fact.MR expects demand in the U.S to expand at over 8% CAGR.

What Growth Opportunities are Being Offered by India?

Demand for well intervention is expanding in India has been increasing due to the production activity in the market along with government investments in the oil and gas sector. The growth of the economy in India is closely related to its energy demand, therefore, the need for oil and gas is projected to grow more, thereby making the sector quite conducive for investment.

According to the Indian Brand Equity Foundation, the government has allowed 100% Foreign Direct Investment (FDI) in many segments of the sector, including natural gas, petroleum products, and refineries among others. Furthermore, the Government is planning to invest US$ 2.86 billion in the upstream oil and gas production to double natural gas production to 60 billion cubic meters and drill more than 120 exploration wells by 2022.

Looking at the current scenario, the market is projected to show rapid growth in the country. As per Fact.MR’s study, the country is poised to register a CAGR worth 6.5% across the forecast period ranging from 2021 to 2031. 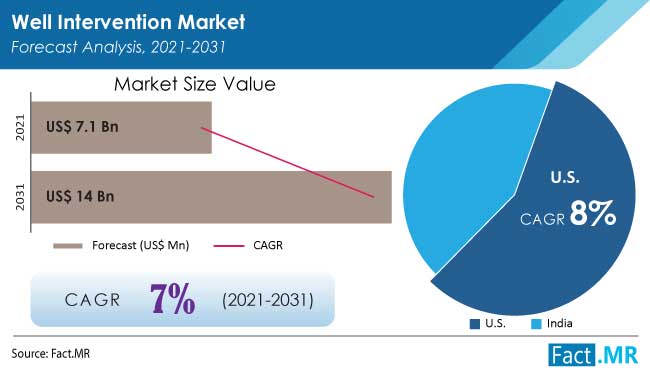 Which Type of Well Accounts for the Highest Share?

Light well intervention is projected to lead the overall market, holding more than half of the share in 2021, followed by the segment of medium wells. Advances in technologies have significantly reduced the intervention cost by nearly 50%-60% as compared to drilling rigs, which is expected to be highly impactful on the growth of light well intervention market.

Coiled tubing services have gained speedy momentum for their efficient and reliable intervention for different types of wells including live, horizontal, vertical, and highly deviated wells.

In addition to rising scope of application, coiled tubing services are mostly sought-after for their ability to improve well and reservoir performance, which will remain one of the important factors to accelerate the overall growth of well intervention market. A CAGR worth 6% is projected for this segment.

According to Fact.MR, well intervention services for offshore applications are expected to contribute the majority share of global revenues, capturing nearly 55% of the market share by 2031. Growth is primarily attributed to the increasing number of offshore oil & gas exploration projects planned for the forthcoming decades, especially across Africa and North America.

The competitive landscape of the well intervention market is shaped by product innovation and strategic mergers & acquisitions. Front Runners are emphasizing capacity enhancements and global footprint expansion to leverage lucrative prospects in developing economies. Some notable developments are as follows:

By 2021, the well intervention market is likely to be valued at over US$ 7 Bn, according to Fact.MR

From 2016-2020, well intervention services deployment surged at a CAGR of around 6%

By 2031-end, well intervention services demand will likely reach a value of US$ 14 Bn

According to Fact.MR, well intervention deployment in the U.S is anticipated to flourish at a CAGR of 8%

India is experiencing increased uptake of well intervention, registering a CAGR of 6.5% from 2021-2031

Light well intervention is highly sought after, accounting for 56% of global market demand

Coiled tubing well intervention services will progress at the highest rate, at a CAGR of 6%

Offshore well intervention will likely dominate the market, accounting for 55% of revenue

*33 figures and 96 tables includes by FactMR