The global wearable exoskeleton market is poised to generate highly lucrative gains and surge ahead at an astonishing CAGR of over 30% from 2022 to 2032, with growth largely reliant on future technological innovations and product developments. As muscle fatigue and disorder prevalence rates rise, key industries are demanding more physical comfort-enhancing solutions, prompting manufacturers to introduce new product lines.

According to Fact.MR, the global wearable exoskeleton market was valued at over US$ 100 Mn in 2021, registering an incremental CAGR of 25% from 2017 to 2021. Realizing the application potential, key manufacturers have been introducing a slew of innovative product lines, offering highly customized solutions based on industry-specific requirements.

As the intensity of the pandemic gradually lifted in 2021, growth prospects experienced an uptick, as key end-use industries such as military & defense, industrial manufacturing, and others experience a resurgence. Moreover, planned technological innovations and greater integration of AI and machine learning are further expected to enhance growth prospects, with the market projected to expand at a stellar CAGR of over 30.3% through 2031.

According to the World Health Organization and World Bank’s joint study, over a billion people (15% of the global population) suffer from some of the other forms of disability. Moreover, the Global Burden of Disease Study estimates childhood disability prevalence to be 95 million (5.1%) children, with 13 million (0.7%) having an acute disability.

Furthermore, the growing incidence of strokes, injury-induced trauma, as well as rising number of road hazards is leading to an increase in the number of physically disabled patients, globally. Amongst all of those, spinal cord injuries are the maximum, with almost 250,000 to 500,000 people suffering from them. The majority of them are due to preventable causes such as falls, violence, or road accidents.

Attributed to these trends, demand for wearable exoskeletons is expected to remain sustained throughout the forecast period. Since almost nine out of ten injuries arise from traumatic wounds, prominent manufacturers are designing appropriate wearable exoskeletons that help reduce stress on the spinal cord. In 2018, researchers at the Universidad Miguel Hernandez in Elche, Spain, developed a robotic smart exoskeleton, which, when combined with a robotic wheelchair, helps disabled people to eat, drink, or wash.

How is Preference for Lightweight Exoskeletons Stimulating Demand?

Since 2019, a multitude of manufacturers are striving to introduce lightweight wearable exoskeletons, including personalized wearable exoskeletons, a trend that is expected to majorly determine the future growth trajectory of the market. A prototype lower-body device was developed via a collaboration between The City University of New York, City College (CCNY), and The University of Texas Health Science Center at Houston (UTHealth).

The exoskeleton is intended for use by seniors who possess some degree of mobility but find it difficult to walk for extended periods. According to a Journal of Public Health report, over 30% of people aged 65 or older find it challenging to walk the equivalent of three city blocks. Hence, this exoskeleton provides assistance in this regard by utilizing integrated motors providing an electric boost to the wearer’s gait, and is quite light in weight.

In December 2020, Italy-based Comau announced the launch of MATE-XT, a new version of its Muscular Aiding Tech Exoskeleton which features a slim, lightweight carbon fiber structure and an intuitive regulation system, permitting easy adjustment of the system’s water-, dust-, ultraviolet light-, and temperature-resistant design. The exoskeleton is deployed in agriculture, carpentry, construction, assembly, logistics, and other industries.

Why are Start-up Manufacturers Gaining Momentum?

As wearable exoskeletons are a relatively new technological advancement, the landscape is interspersed with the emergence of countless start-up companies, besides existing established players. With key industries looking to integrate flexible solutions, demand for wearable exoskeletons is only poised to incline. Hence, governments are making the investment climate more favorable.

SuitX is amongst the most prominent wearable exoskeleton manufacturers, offering an exoskeleton that attaches to the user’s legs. This exoskeleton is lightweight, adjustable, and does not limit the tools carried on a worker’s belt. The solution is highly effective in preventing knee injuries and reducing the load on the quadriceps.

How is the U.S. Military Leveraging Wearable Exoskeletons?

The U.S. is expected to yield credible gains to the global smart exoskeleton market, especially across the military sector. The U.S. army has been exploring commercial exoskeleton technologies for potential military applications, mostly to reduce strain injuries and build soldiers’ endurance. A CAGR of around 25% is projected for the U.S market.

Wearable exoskeletons have proven to be capable of enhancing the physical capabilities of a warfighter, permitting them to run faster and lift much heavier objects without straining any of their joints. The U.S. Army Natick Soldier Research and Engineering Center (NSRDEC/Soldier Center) initiated a 48-month long Other Transaction Agreement (OTA) worth US$ 6.9 million for developing exoskeleton systems in 2019.

Why is the U.K. Touted to Be a Highly Opportunistic Market for Wearable Exoskeletons?

Exoskeletons have been acquiring rapid popularity across the U.K., falling under the Great British Technology area of Robotics and Autonomous Systems. Since many years, exoskeleton deployment has been the focus of significant public spending. Innovate the UK, the country’s innovation agency, has funded £22 million, while other research organizations have contributed over £200 million pounds for this purpose.

One such company funded through government initiatives includes Elumotion, which has developed a fully functional robotic hand commercially available, owned, and marketed as the Schunk Servo-electric-5-Finger Gripping Hand. The Elu2-Hand was a human-scale anthropomorphic robot hand able to approximate real hand movements at humanlike speeds, making it ideal for interacting with people. A CAGR of around 20% is projected for the market in the U.K.

How elevated are Growth Prospects for Wearable Exoskeletons in Germany?

The German wearable exoskeleton industry is riding the high wave, with demand surging for healthcare and industrial wearable exoskeletons. As part of the Horizon Europe initiative, Germany aims to intensify R&D activities to bring about a revolution in the regional healthcare market. A major expected breakthrough is the increased incorporation of robotics and automation.

While exoskeleton manufacturers have been collaborating with healthcare providers for a long, significant headway has been achieved in the very recent past. In March 2020, for instance, ReWalk Robotics, a developer of lower limb disability exoskeleton, reported significant progress with a group of German Statutory Health Insurers (SHI) to allow any eligible beneficiary with a spinal cord injury to seek procurement for ReWalk 6.0 for home and community use.

Similarly, German Bionic’s Cray-X Robot-as-a-Service (RaaS) was unveiled in February 2020, designed to support and enhance the wearer’s movements, and reduce the risk of accidents and excessive strain for employees in sectors that involve repetitive yet unpredictable heavy lifting. As per Fact.MR, the German market is forecast to surge at a CAGR of 22% throughout the 2022-2032 assessment period. 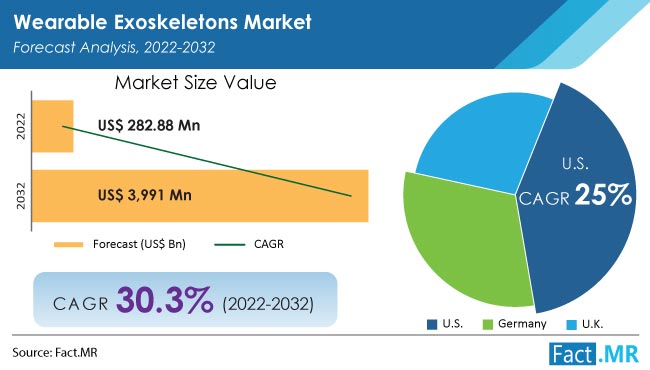 By product, while rigid smart exoskeletons remain significantly popular. Demand for soft smart exoskeletons is expected to register high growth, owing to the rising need for incorporating flexible wearable technologies with a view to reducing discomfort. Soft exosuits, as they are also widely known, offer more conformal, unobtrusive, and compliant means to interface with the human body.

The Harvard Biodesign Lab is largely credited with introducing soft wearable exoskeletons, which incorporate structured functional textiles that are inspired by an understanding of human biomechanics and anatomy. These wearable garments provide means to transmit assistive torques to a wearer’s joints without the use of rigid external structures. Moreover, they are lightweight, offering efficient actuation.

“Robotic wearable exoskeletons to surge in demand for lower extremities“

Increasing numbers of neurological diseases, such as spinal cord injuries (SCIs), and strokes, tend to have a negative impact on quality of life. Thus, regaining the ability to walk is one of the key objectives of rehabilitation. The segment is likely to capture 3/5th of the global market revenue.

Growing incidence of muscle strain and subsequent onset of joint stiffness is laying bare the ground for enhanced sales of rehabilitation wearable exoskeletons through 2022 and beyond. Fact.MR expects this segment to surge at a CAGR of 20%.

Increasing product functionality is a key factor for the growing demand for smart exoskeletons. Therefore, market players are increasing their R&D spending in order to launch new products in the market. Furthermore, both acquisitions & mergers, collaborations, and regulatory approvals are also crucial components of effective growth.

How much is the wearable exoskeletons market worth?

The global wearable exoskeletons market size is likely to be worth US$ 282.88 Bn in 2022

What was the last 5-year market CAGR of wearable exoskeletons?

How much is the wearable exoskeletons market expected to be worth by 2032?

The wearable exoskeletons market is expected to reach nearly US$ 3,991 Mn by 2032

What are the key trends in wearable exoskeletons in the global market?

Increasing demand for exoskeletons across multiple industries, investment from major industry players, and the establishment of numerous start-ups, along with the need to increase individual efficiency and reduce fatigue.

What is driving the demand for wearable exoskeletons in the market?

The rising number of strokes and spinal cord injuries are driving the global wearable exoskeletons market.

Who are the top 5 players in the wearable exoskeletons market?

What are the top 5 countries driving demand for wearable exoskeletons?

U.S., UK, Germany, France, and China are the top 5 countries driving demand for wearable exoskeletons in the market.

At what percentage wearable exoskeletons is going to register growth in the U.S?

Wearable exoskeletons demand is expected to rise at a 25% CAGR in the U.S through 2032