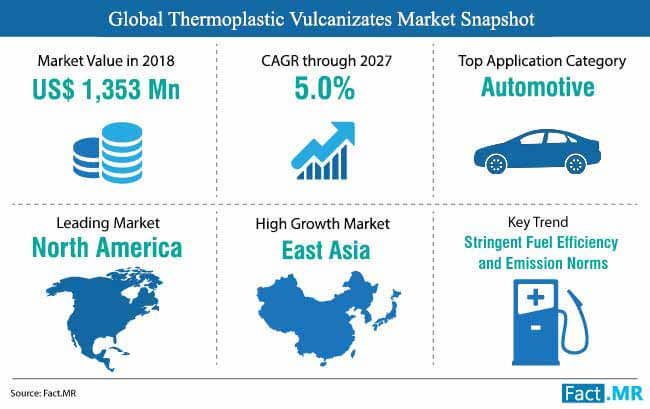 What are the Key Growth Drivers of Thermoplastic Vulcanizates Market?

What are the Key Challenges Faced by Stakeholders of Thermoplastic Vulcanizates Market?

Founded in 1918, Celanese Corporation has its official headquarters in Irving, Texas. The company manufactures and commercializes thermoplastic vulcanizates for applications such as automotive, consumer applications, construction, and others. The company offers a broad portfolio of products with robust R&D capabilities to cater to the ever-evolving consumer needs & preferences.

Founded in 1934, Mitsubishi Chemical Corporation is one of the leading manufacturers of thermoplastic vulcanizates for use across home appliances and automotive applications. As one of the chief subsidiaries of Mitsubishi Chemical Holdings Corporation, the company extensively focuses on R&D to come up with new technologies to cater to the diverse demands of various end-use industries.

Founded in 2004, Lanxess Aktiengesellschaft is a specialty chemicals company that has its corporate headquarters in Cologne, Germany. The company was founded through the spin-off of chemicals division along with parts of the polymer’s business of Bayer AG.

Founded in 1961, Ravago SA is a company producing high-quality plastics and its corporate headquarters are located in Luxembourg, Europe. The company is predominantly active in the space of building materials, polymer & chemical distribution, and recycling & compounding of elastomeric and plastic raw materials.

Founded in 1863, Solvay S.A. is a Belgium-based chemical company and has its corporate headquarters in Neder-Over-Heembeek, Brussels, Belgium. Solvay is well-known for developing advanced materials & specialty chemicals according to the needs & specifications of every industry. Solvay assists its customers in terms of finding and implementing responsible and value-added solutions best-suited to their needs.

In addition, super TVPs are also being used for appliance and industrial components that are subjected to unusually high temperature requirements, given that super TVPs offer unbeatable heat resistance in comparison to the conventional variants.

The research study on thermoplastic vulcanizates market is a result of extensive research methodology, comprising of a primary phase and a secondary phase.

Which are the dominant countries in the global Thermoplastic Vulcanizates Market?

Who are the prominent manufacturers of Thermoplastic Vulcanizates Market?