The global cocoa liquor market is set to surpass a valuation of US$ 6.2 Bn by the end of 2022. The market size is expected to grow at a CAGR of 2.9% during the period of assessment.

As per Fact.MR – market research and competitive intelligence provider, during the historic period of 2016 to 2020, the market expanded at a high CAGR and registered an impressive valuation of nearly US$ 5.8 Bn at the end of 2021.

The prevalent popularity of chocolate-based products in the food & beverage sector continues to influence companies towards increasing the production of cocoa liquor. A wide range of cocoa products is being made from cocoa liquor, which includes cocoa butter, cocoa-based creams, and other chocolate solids.

Over the years, the demand for cocoa liquor is surging vigorously, while producers are struggling to extend their production capacities. While the increasing inclination of farmers towards cash crops has spurred the cultivation of cocoa in the global agricultural sector, companies partaking in the global market are facing challenges with respect to the high use of alcohol.

The presence of edible alcohol in cocoa liquor continues to become a major concern for environmental companies as the production of cocoa liquors entails the emission of toxic elements. Considering the aforementioned factors, the market for cocoa liquor is projected to touch US$ 8.25 Bn by the end of the forecast period (2022-2032).

Fact.MR forecast study suggests that over 1.4 million tons of cocoa liquor is expected to be sold across the globe by the end of 2026.

Will the Popularity of Specialty Chocolate Fuel the Demand Rate?

The end-users of premium and specialty chocolate have been on a rise for the last few years. The fine flavor of cocoa liquor is one of the key reasons behind the spike in market demand.

Furthermore, the demand for cocoa liquor is expanding due to the launch of new premium chocolate brands in major regions. These brands are focusing on launching and selling premium chocolate products across the world.

The customer penetration is also widening for high-priced chocolate products. Considering this, the global key players like Mars and Ferrero are investing in the improvement of their current and future offerings and are also incorporating cocoa liquor in their products.

How are New Flavors Turning out Opportunistic for Market Players?

The consumers are engaging themselves in more indulging experiences especially when it comes to food. They demand texture, flavor, and color, which is a key factor in the growth of the market for cocoa liquor.

Manufacturers are working on launching many different flavours to cater to the interests of the consumers. Flavors such as chocolate and vegetables have gained significant popularity in the last few years and across a range of categories.

For instance, a recent trend in the market is mixing chocolate flavors with beetroot in cakes and incorporating chocolate bars with extremely different yet complementing kale flavor.

The launch of such products attracts consumers and pushes them to try varying textures in their food. The unsweetened cocoa liquor is used to intensify the flavor of chocolates and much more. Based on these factors, the fact.mr analyst projects a good growth rate of the market.

Why is the United States a Highly Lucrative Market for Cocoa Liquor?

The United States cocoa liquor industry is projected to hold the maximum share and is predicted to remain the most lucrative across North America. According to Fact.MR analysts, the U.S. is estimated to account for more than 85% of the North America market in 2022.

Dark chocolates and other quality chocolates are in high demand among US's consumers. Chocolate and confectionery both employ cocoa liquor as an ingredient. During the forecast period, this trend is likely to have a beneficial impact and lead to the expansion of cocoa liquor in the US. The country is likely to register a CAGR of roughly 3% from 2022 to 2032.

What’s Bolstering the Growth of Players in India?

According to Fact.MR analysis, the Indian market for cocoa liquor is projected to show a significant growth rate of 5.5%. With the baking industry expanding in the country, cocoa liquor is extensively in use.  The rising demand for bakery products is directly leading to the rising use of cocoa liquor.

Furthermore, the bakery business is one of the most important segments of the country's processed food industry. Accounting for about 32 per cent of the country’s total food market, The Government of India has been instrumental in the growth and development of the food processing industry. This is projected to drive the overall market demand.

According to the analysis conducted by Fact.MR, Germany is expected to be the epicenter in the European region with a dominant share of more than 17%. The country has some of the leading manufacturers of chocolate goods who enter into partnerships and mergers to hold a greater market share.

They are spending more on R&D projects and offering products with the latest technology and maximum efficiency. These factors are responsible for the high demand for cocoa liquor in Germany. In addition to this, a significant chocolate consumer base makes Germany the second-highest per capita chocolate consuming country in Europe. 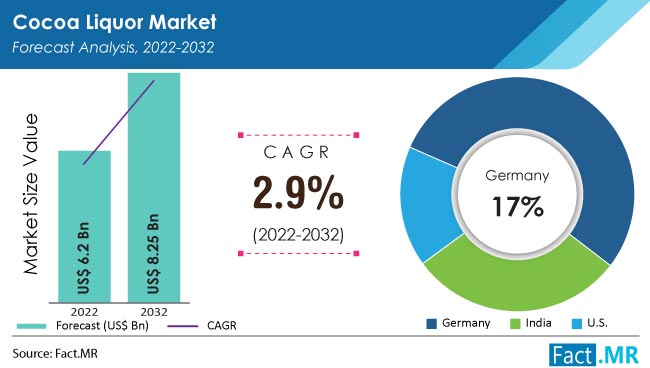 Why Dutch Chocolate Liquor Turns Out to Be the Most Lucrative One?

Increasing adoption of the Dutching process among producers of chocolate products in the global food and beverage sector is slated to influence the demand for Dutch cocoa liquor.

Which is likely to be the Dominant Cocoa Liquor Variety?

On the basis of the variety of cocoa beans, Criollo and Forastero are expected to remain in great demand as cocoa liquor made from these varieties are likely to influence the consumer taste preferences more as compared to Trinitario and other cocoa varieties.

What is the Market Share of Cocoa Liquor Wafers?

The report has analyzed the global market for cocoa liquor on the basis of the form of liquor. It is forecasted that in 2022 and beyond, high amounts of cocoa liquor in the form of wafers will be sold globally.

The report also reveals that chocolates and confectionaries will be the largest end-use industry for cocoa liquor, followed by ice-cream production. By the end of 2032, these two industry verticals will account for nearly 50% of the global market volumes.

Which is the Most Prominent Variety of Cocoa Liquor?

Forastero cocoa is estimated to account for more than 75% of market share in 2021, which is expected to witness growth rate of CAGR 2.2% over the forecast period.

Through 2032, cocoa liquor made from the Trinitario cocoa variety is expected to register rapid sales at a CAGR of 5.2%, while Criollo cocoa variety will account for more than 50% of the global market volumes.

The competitive landscape of the cocoa liquor market is shaped by product innovation and strategic mergers & acquisitions. Front Runners are emphasizing capacity enhancements and global footprint expansion to leverage lucrative prospects in developing economies. Some notable developments are as follows:

The U.S is expected to experience a CAGR of 3% with regard to cocoa liquor sales

Yes. Germany is slated to be the kingpin of cocoa liquor, accumulating a revenue share of 17%