Peptides are amino acids’ short chains connected through peptide bonds. Peptides are molecules that are commonly known as proteins, whose functions are determined on the basis of the amino acid sequence and size.

Heparin is known as disaccharide anticoagulant, commonly referred to as blood thinner, which prevents formation of blood clots. Mast cells and basophils in a body produce heparin, which is stored in mast cells and secreted wherever injuries occur. 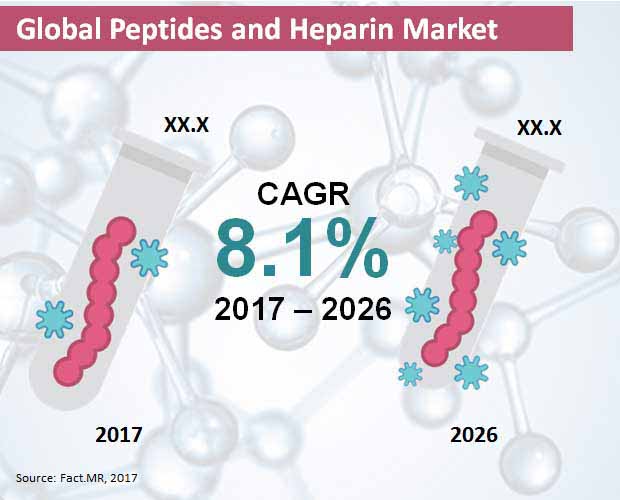 While the pharmaceutical sector discerned small molecules as the medicinal agents, therapeutic peptides were considered to be niche products.

However, with mounting challenges regarding small molecules, drug developers are shifting their concentration back to small amino acid chains.

Although peptides have been deemed ineffective for developing drugs, modern peptide drug designs and formulations have been developed for circumventing their weaknesses.

For example, original requirement for injecting peptides such as insulin is fading, with more patient-friendly administrations progressively being developed.

In addition, the current society that critically judges undesirable effects and environmental impact of the candidate medicines is embracing the safety offered by peptides.

Heparin is being extensively employed as an antitumor and anti-inflammatory agent. The anti-inflammatory characteristic of heparin, which prevents metastatic spreading of tumor cells, is a new research finding among healthcare professionals.

The metastatic spreading of tumor cells is restricted by heparin through neutralization of cationic mediators, inhibition of heparanase, and adhesion molecules.

Recent discoveries have meant that heparin is capable of targeting L- and P-selectin & integrin activity, as well as preventing cancer progression.

A new report by Fact.MR projects the global peptide and heparin market to reflect an impressive expansion during the forecast period, 2017 to 2026. Revenues from the market are estimated to exceed US$ 34,000 Mn by 2026-end.

APEJ to Remain Most Remunerative Market for Peptide and Heparin

There has been a growing demand for new oral anticoagulants having better efficacy and safety profiles in Asia-Pacific excluding Japan (APEJ).

Side effects related to heparin products, including complications of bleeding and heparin-induced thrombocytopenia has resulted into robust adoption of oral anticoagulants in the region.

In addition, rising incidence of cancer, metabolic disorders, and hepatitis, along with advancements in peptide synthesis technology and rapid demand for various peptide therapies in the region are expected to drive the growth in APEJ. APEJ will remain the most remunerative market for peptide and heparin.

Liraglutide and ammonium heparin are expected to remain fast-expanding products in the market. In addition, sales of exenatide, lithium heparin, and sodium heparin will register a similar CAGR through 2026.

The global market for peptide and heparin is high fragmented and competitive owing to the presence of a large number of international and regional vendors.

These vendors are continuously focusing on the development of generic formulations related to blood coagulation and several other novel therapeutic areas.

Companies having the capability of manufacturing drugs for effective treatment of coagulation disorders, along with high efficacy and safety profiles are likely to gain maximum market shares in the foreseeable future.

Key market participants identified by the report include

The demand for the Fusion Protein Biosimilars market is expected witness a surge in the forecast per...

The key trends that are impacting the growth of Laboratory Andrology Equipment Market is exploration...