Demand for SATCOM is predicted to rise at a significant CAGR over the forecast period, attributed to the increasing adoption of SATCOM for defense operations and enhanced tactical communications services for various platforms.

Wireless communication systems have changed communication standards drastically in the past 20 years; latest innovations such as tactical communications in digital signal processing and compression technology have helped in tackling the problem of miscommunication.

Tactical mask communications are improved communication systems created and implemented to enable effective military communications from one command, person, or location to another on a battlefield, particularly during combat.

For tactical communication, confidentiality is of utmost importance. Because of the developing trend of asymmetric warfare, such as mass devastation, terrorism, economic fraud, and cyber-attacks, tactical equipment such as tactical scopes are being improved for the military.

According to Fact.MR, a market research and competitive intelligence provider, demand for tactical communication systems is expected to increase at a CAGR of 5% between 2022 and 2032. 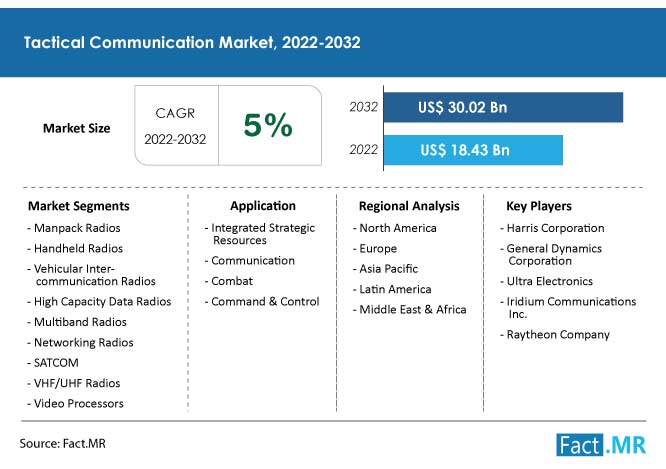 The defense sector has two fundamental requirements: the security of highly secret information and the preservation of constant communication. Assume that critical data is not properly protected or that real-time data is not appropriately sent. In such instances, residents' safety would be compromised and international issues may ensue.

Moreover, to transfer information to individuals and across geographic boundaries, communication relies on a large and complex network of physical components and software. Escalating conflicts among countries around the world are raising military spending.

As a result, the tactical communication & protective system market is likely to grow at a faster rate during the forecast period as more communication systems with increased security and privacy features emerge.

Which Recent Market Trend is Paving the Way for Start-ups?

How Opportunistic are the Growth Prospects for Tactical Communication across Regional Market?

High spending on military tactical communications gear in the United States and the presence of prominent communication systems and equipment producers are the factors driving market growth in North America.

Asia Pacific is expected to experience long-term growth in the market due to the implementation of network-centric warfare. Furthermore, increased military spending by countries such as China and India to create advanced military systems and modernize the defense sector is propelling the Asia Pacific tactical communication market forward.

Which Platform is Likely to Contribute the Most to Tactical Communication Market Expansion?

By platform, the tactical communication market can be classified into underwater, airborne, land, and shipborne. The land platform in the market is projected to rise at the highest CAGR over the forecast period.

Land-based forces have the largest manpower strength and operate the most vehicles, thus militaries all over the world are beefing up their land-based mission capabilities. Land-based communication networks are improving, enabling ground forces to use efficient wireless communication equipment and cellphones while on the move in ground vehicles or as dismounted infantry.

Increased necessity for encrypted communication for land-based forces has resulted in communication solutions in a smaller form factor, such as manpack radios, that improve mobility.

Present 5G and upcoming 6G networks are intended to create new horizons in tactical communication for military units on the land by providing them with more data bandwidth, which will result in faster data speeds, better connectivity, and greater range. These technologies are also projected to create opportunities for land platforms during the projection period.

The global tactical communication market is valued at US$ 18.43 billion.

The market for tactical communication systems is set to rise at 5% CAGR.