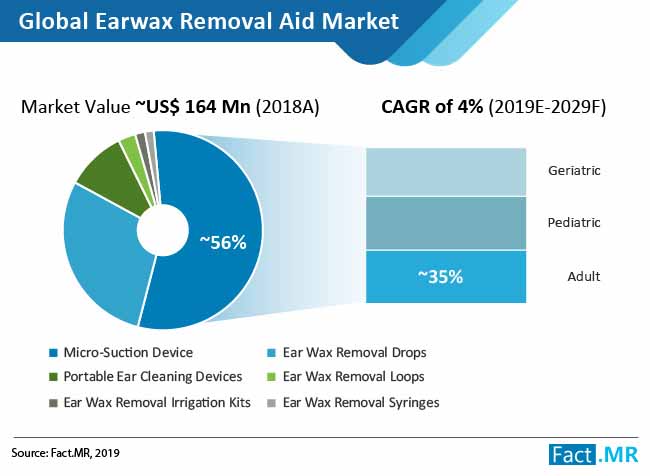 The expansion of consumer touchpoints by the key players enable a significant potential to cover the untapped market opportunities for revenue generation in the earwax removal aid market.

Hospitals have achieved higher patient satisfaction in the use of micro-suction earwax removal aids post screening of ear health and safe removal of earwax. Earwax removal aids are becoming a key component of the medical toolkits that are used in the non-invasive procedures, providing accurate evaluation and treatment of ear blockage or temporary hearing loss caused by earwax impaction.

Earwax removal aids help healthcare professionals to properly and safely remove the excessive earwax and to suggest proper management and cleanliness methods to avoid excessive earwax formation. This has, in turn, helped the healthcare professionals to achieve patient satisfaction, and subsequently acts as the key driving factor for the growth of earwax removal aid market.

Moreover, the earwax impaction has increased among children and adults by ~ 30-35% compared to 2015 due to various factors such as increasing pollution, improper and lack of cleanliness, negligence of ear impaction symptoms, lack of knowledge on management, and/or unwillingness to regularly visit healthcare professionals for a regular health checkup.

These factors are projected to contribute to the growth of the earwax removal aid market. Earwax extractions are largely performed in otolaryngology, head and neck surgery practices. Practice patterns and reimbursement rates for earwax extractions vary greatly across countries. In 2012, the U.S. Centers for Medicare & Medicaid Services spent ~US$ 47 Mn in reimbursements for otolaryngology procedures alone.

However, the reimbursement for earwax extraction practice covers only Medicare Part B for Fee-for-Service beneficiaries and does not cover the younger population or demonstration programs.

Also, only healthcare professionals who performed an earwax removal procedure on ~ 10 Medicare patients are included in the Centers for Medicare & Medicaid Services database. To some extent, these factors are likely to upsurge the treatment-seeking population and is expected to boost the earwax removal aid market growth.

A majority of the population prefer using earwax removal aids and medications to self-diagnose or manage self-recognized symptoms of earwax impaction. This is to avoid unnecessary expenditure on healthcare visits. The self-medication has potential risks that include incorrect use of earwax removal aid that can delay medical-seeking advice.

Also, it can cause severe adverse side-effects or drug interactions that can lead to a wrong method of administration, choice of therapy, and dosage. These factors can lead to severe ear-related disorders or can lead to permanent hearing loss. Moreover, improper implementation of clinical practice guidelines and lack of proper healthcare infrastructure in developing regions, such as East and South Asia and the Middle East and Africa are factors expected to restrain the growth of earwax the removal aid market.

In 2017, According to a survey conducted by the Centre of International Health, Norway, ENT services and other related training opportunities in 18 sub-Saharan African countries were extremely poor and the region lacks proper ENT services. Lack of awareness regarding available procedures and improper regulatory frameworks are also expected to hinder the growth of the earwax removal aid market.

According to several studies published in the journal Global Health Action, the number of ENT surgeons per 100,000 people have declined in 4 countries in the Sub-Saharan African region. Furthermore, earwax removal aid requires special assistance and care. 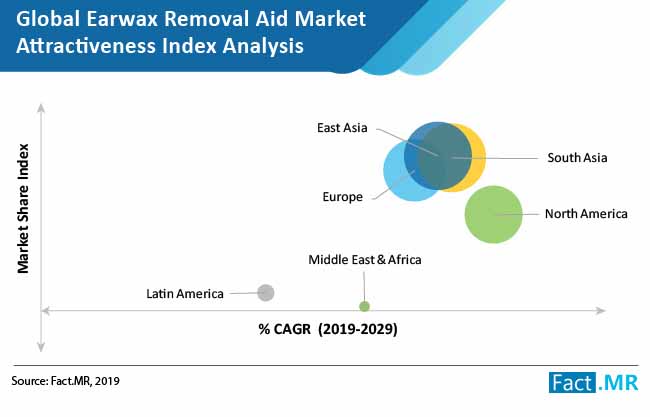 Also, online purchasing of merchandise are very popular, which has created huge online sales potential for earwax removal aids in these regions. However, a majority of the population opt for earwax cleaning from unauthorized service providers other than hospital or ENT clinics. This has increased the number of people suffering from ear infection due to usage of poor and unhygienic practices.

The earwax removal aid market in North America is expected to grow steadily, mainly due to increasing population suffering from earwax impaction and growing awareness of the available treatment options in the region. The increasing burden of earwax impaction is further driving the market growth.

In hospitals and ENT clinics, the usage of earwax removal aids, especially micro-suction earwax removal aids is increasing. Also, many generic alternatives to branded products are available in the earwax removal aid market due to which the average selling price across product categories is expected to decrease in the forecast period.

Who are the top 5 earwax removal aid market suppliers?

Which are the major countries driving demand for earwax removal aid market?