Computer-assisted mammograms improve the quality of breast cancer diagnostics because they can be enhanced, zoomed, or otherwise altered for better analysis. The goal of computer aided detection is to decrease false-negative results and observational errors. It aids in the diagnosis and early detection of cancer, neurological conditions, and cardiovascular issues using imaging modalities.

Computer aided assistance in medical sciences has existed for a long time. Over the last two decades, doctors, researchers, and practitioners have been using medical imaging devices that are integrated with computer aided detection or computer aided diagnosis.

The performance and efficiency of computer-aided detection systems have also been improved by advanced digital imaging techniques, opening up the lucrative potential for market participants during the projection period. Market growth rate will also be facilitated by expenditures in research and development of 3D imaging. Market expansion is expected to boost by increased disposable income and healthcare spending in emerging economies throughout the forecast period.

Health insurance policies protect against the high medical expenditures associated with computer-aided detection and pay for things such as hospitalization bills, daycare procedures, and other fees. Health insurance plans allow you to concentrate on your quick recovery rather than fretting about the expensive charges of computer aided detection.

Why are Computer Aided Detection Systems High in Demand?

The global computer aided detection market is expanding due to the rising prevalence of various chronic diseases such as stroke, various malignancies, cardiovascular disorders, and neurological dysfunctions. Additionally, the enhanced government initiatives to promote cancer awareness and treatment are anticipated to drive the global demand for computer aided detection systems.

Market expansion is expected to be fostered by several patients choosing diagnostic imaging methods. The market is anticipated to grow as a result of the growing usage of computer aided detection systems in clinical research activities, as well as growing awareness among healthcare professionals of their benefits, including their ability to accurately detect chronic diseases in their early stages and lower mortality rates from cancer, cardiovascular, and neurological diseases. Increasing awareness of successful cancer treatments among patients is driving market value.

Rapid innovations in the healthcare industry are fueling market expansion. Artificial intelligence (AI) development and increased sensitivity are two recent advancements that are expected to support market growth. Medical imaging equipment combined with computer aided detection is used by medical researchers and doctors. The demand for computational support is growing as a result of the need for error-free detection.

Physicians may more quickly identify abnormal tissue, serving as the first line of defense in the fight against cancer with the help of computer aided detection (CAD) technology. Thanks to advances in computer technology, CAD, which has been around for almost ten years, has emerged as an important cancer detection tool.

What Can Restrict Global Adoption of Computer Aided Detection Tools?

High costs associated with computer aided detection tools are projected to challenge market expansion over the coming years, according to pricing trends. People typically choose conventional techniques of diagnosis because the majority of medical insurance companies do not provide coverage for operations using computer-aided detection. 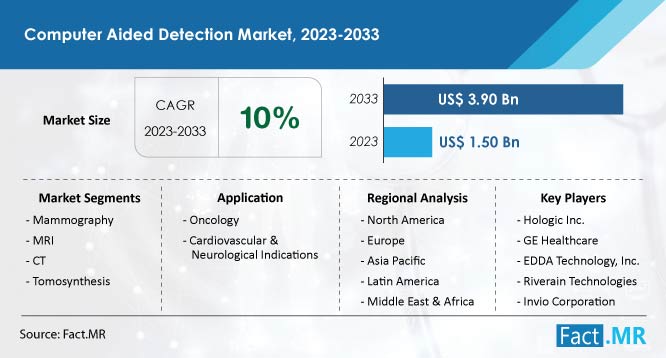 How Can Emerging Market Players Increase their Revenue Share?

New entrants are focusing on R&D to offer novel early cancer detection systems using AI and the most advanced medical imaging technology. Start-ups are enhancing product standards and concentrating on the local supply of computer aided detection devices to make a mark in this industry.

Which Region Should Computer Aided Detection System Providers Invest In?

North America accounts for 40% share of the global market owing to increasing incidences of breast cancer.

New developments in advanced breast cancer imaging techniques and an increase in awareness about early breast cancer screening are also anticipated to drive the North American market forward. The market for computer aided detection is expanding in North America due to the availability of advanced diagnostic equipment in most hospitals and a well-established healthcare system.

Why is the United States a Major Market for Computer Aided Detection?

The high rate of cancer-related mortality is an important reason driving the demand for computer-aided cancer detection and diagnosis.

A rise in businesses producing computer aided detection devices, the growing healthcare expenditure, and the increased adoption of CAD for cancer diagnosis are anticipated to fuel market expansion over the coming years. An increase in computer-aided cancer detection centers and the installation of innovative computer-aided digital devices are driving market growth in the country.

What is the Demand Outlook for Computer Aided Detection Systems in Japan?

Japan is anticipated to be the most attractive market for computer aided detection technologies. A large patient pool, owing to a huge population base and subsequent incidences of diseases shall propel market growth.

Which European Country is Likely to Be a Prominent Marketplace?

Major factors influencing market revenue growth in Germany include the availability of efficient computer-aided diagnostic facilities and an increase in medical tourism. The availability of modern computer aided detection tools at a very reasonable cost is another reason for boosting market value in the country.

Why is Demand for Mammography Gaining Ground?

By imaging modality, the market is segmented into mammography, MRI, CT, tomosynthesis, and others. Mammography accounts for 50% share of the global market owing to rising incidences of breast cancer among women. Mammography is majorly performed for two purposes, including diagnostic and simple screening for genetic traits of breast cancer.

The emergence of advanced mammography systems with advanced features, rapid adoption of computer aided diagnosis systems in multispecialty hospitals, and growing awareness of early diagnosis and treatment of breast cancer are the major factors driving demand for mammography procedures. Additionally, when compared to standard film mammograms, computer-assisted digital mammograms considerably reduce the amount of radiation that cancer patients are exposed to, protecting them from potentially toxic radiation side effects.

Based on the application, the market is divided into oncology, cardiovascular & neurological indications, and others. The adoption of computer aided detection systems in oncology is increasing due to rising cancer prevalence, increased public knowledge of different cancer types, the significance of early-stage cancer detection, and the introduction of technologically advanced hardware and software.

Leading companies are focusing on quality control & supply chain management and launching highly effective computer aided detection systems following safety regulations to lower the environmental impact. The market is likely to be driven by government initiatives to broaden the applications of CAD with other modalities and key player tactics to introduce novel computer aided detection tools.

Adoption of computer aided detection systems is estimated to increase at a CAGR of 10% through 2033.

Sales of computer aided detection devices are expected to reach a market valuation of US$ 3.9 billion by 2033.

North America accounts for around 40% share of the global computer aided detection market.

*83 figures and 76 tables includes by FactMR