The reduction of greenhouse gases and maintaining the air quality is the top priority of all major developed and developing countries in the world.

Various organizations are being set up to ensure proper formulation of regulations and their implementation across the world. The awareness regarding global warming has compelled key nations to join hands together and act upon sustainable measures to protect the environment.

Fluoroelastomers are highly resistant to wide range of chemicals and additives present in the automotive fuel. Fluoroelastomers facilitate the reduction in the emissions by its efficient use in various automotive parts such as fuel pipe lining, fuel hoses & seals, fuel injector O-rings, etc. 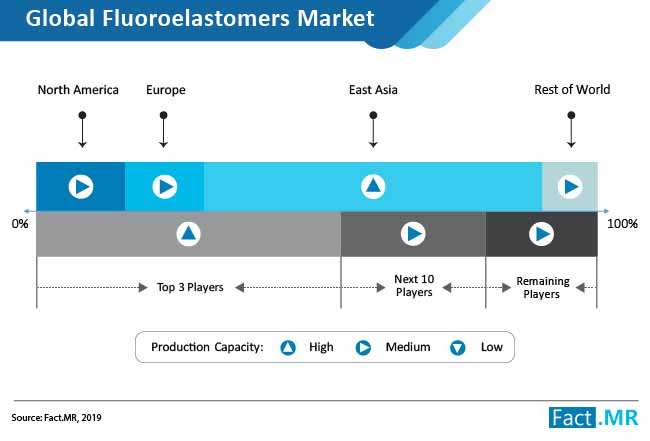 The demand for materials that can efficiently work at prolonged high temperature and harsh environments is continuously increasing to reduce emissions and comply with the standards set by the government authorities. Fluoroelastomers are the primarily preferred materials when it comes to high performance under harsh conditions due to their superior resistance. Depending upon the type of fluoroelastomers, the operating temperature ranges between -40 0C to 300 0C.

Emission Standards in developing countries like India are becoming more & more stringent. By April 2020, the government (Indian) has declared to implement the BS6 emission norms that has made it mandatory for the automobile manufacturers to develop BS6 complaint engines and use high performance materials such as fluoroelastomers for fuel contact components and other parts to reduce emissions.

Thus, implementation of stringent emission norms will provide impetus to the demand of fluoroelastomers.

Increasing Adoption of Fluoroelastomers in Electronics: A New Trend

Fluoroelastomers have been extensively used in Automotive & Aerospace industries. Various industries such as chemical, oil & gas also use fluoroelastomers material in high performance, demanding applications such as seals of pumps, agitators, etc. exposed to corrosive environments.

Leading smart watch manufacturers such as Samsung, Apple, Huawei, etc. have started using fluoroelastomers as the band material owing to its high durability and chemical inertness towards a wide range of chemicals.

Some leading players such as Shin-Etsu have developed new grades of fluoroelastomers that can be used as adhesive & coating in electronic industries particularly in, electronic circuit & printed circuit boards manufacturing. It has applications in high frequency semiconductor devices and printers as well. The development of IoT based products is further expected to increase the demand for fluoroelastomers from electronics industry.

Fluoroelastomers can be compounded with various additives such as carbon black to enhance its performance as per specific need. For instance, Sumitomo Electric has developed a flexible heat resistant tube that remains flexible even at temperatures as low as -40 0C and as high as 200 0C. Thus, the increasing applications in electronics has opened new avenues for the fluoroelastomers market.

Various types of co-monomers are being cross-linked to explore the wide range of properties that Fluoropolymers can offer. FKM (Fluorocarbon Elastomer) alone has more than 4 types of fluoroelastomers that are formed by cross linking of various monomers to exploit the application feasibility of fluoroelastomers. Different types of Dipolymer, terpolymers and pentapolymers have been developed to produce high performance fluoroelastomers.

However, this mechanism lowers the operating temperature range of resulting fluoroelastomers but provides superior chemical resistance.

The amount and type of filler material directly affects the properties of the resulting compounded fluoroelastomers. Compounds stiffen very fast so relatively small amounts of fillers, typically 10-30 phr can be used.

Most common filler material in fluoroelastomers include medium thermal black grade carbon black, Austin black, silica fillers, red iron oxide, Teflon powder, Zinc oxide, Blanc Fixe and others. Depending upon the end use, the fluoroelastomers are compounded as per specific need.

For instance, Lead oxide is recommended, where the fluoroelastomers is exposed to hot acids, dibasic Pb-phosphite with ZnO for exposures to steam or hot water. Therefore, compounding fluoroelastomers products as per customer needs has increased the demand for it by various end use industries. 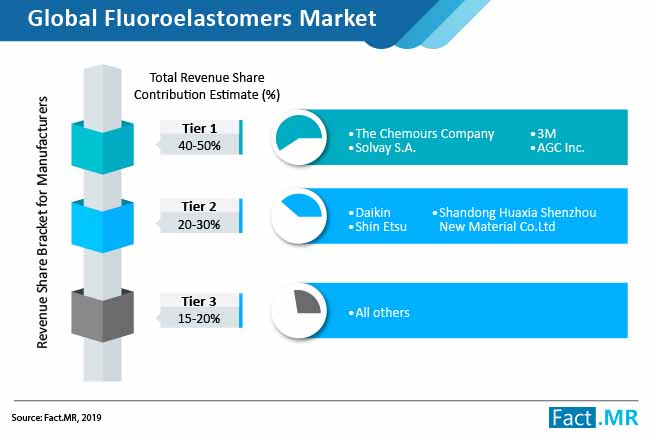 With increasing demand for fluoroelastomers from automotive & aerospace industries, top players have started with production expansion projects to meet the needs of the market. Companies are also entering into long-term partnerships for the supply of raw materials with the local players to avoid the sudden price hikes in the market and loss in the pricing competition with other players.

Solvay S.A manufactures FKM (Fluorocarbon Elastomer) and FFKM (Perfluorocarbon elastomer) type of elastomers under the brand name of Tecnoflon. It has production sites in China & Italy. In 2018, the company announced the expansion of production capacities at both China & Italy plant to meet the increasing demand in the Asia-Pacific region. The Expansion will increase the overall fluoroelastomers capabilities by over 30%, the company reported.

It has developed DAI-EL grades for global as well as local applications. For instance, its fluoroelastomers are used in bullet trains for different applications such as oil & heat resistant electric wiring, jacketing of oil well cables, insulating oil caps for bullet train lines and others.

Changing Regulatory Landscape across the Globe to Impact the Fluoroelastomers Market

Automotive Emission reforms are being incorporated all over the world. The norms are getting stringent and their efficient implementation is amongst the top priorities of the governments.

The Use of fluoroelastomers is thus increasing in the automotive industry to reduce the emissions and comply with the regulations. However, fluoroelastomers have high level of fluorine content in them (at least 66%) that exposes it to the regulatory frameworks.

Various ASTM standards such as ASTM D1418 are prescribed as per fluorine content and manufactures have to meet these standards. FDA approved food contact fluoroelastomers are also developed by the manufacturers but are rarely used due to the presence of fluorine content.

Automotive emissions in Asia- Pacific are becoming more stringent as initiatives to curb climate change are on high priority of the government in the region. In India the government is all set to implement BS 6 emission norms (similar to EURO 6 norms) for automotives by April, 2020. In June 2019, China also debuted some of the strictest norms for automobile emissions to reduce its notorious air pollution.

These reforms will be initially implemented in the areas affected severely by air pollution. The emission standards aim to reduce emissions of nitrogen oxides by 40-50% by 2023. These standards are tougher than the EURO 6 standards. These norms are expected to increase the demand for fluoroelastomers in Asia-Pacific region.

Europe has already implemented the strict automobile emission norms to reduce the pollution. This has positively affected the growth of fluoroelastomers market in the region. North America is also expected to follow the similar trend.

Several Latin American Countries have started implementation of green tax to push their economies towards environmental sustainability. Various initiatives are being taken by International Council for Clean Transportation in the region to enhance the vehicle emission compliance & enforcement practices along with the benefits of adoption of these norms & soot-free transportation.

In the past, various fluorine products have been banned across the globe due to their toxic nature and harmful emissions during production. Ban of PFOA for the production of PTFE is one of the examples. This ban compelled leading PTFE producers in China to stop their production & develop alternative routes to manufacture PTFE.

There are several other fluoro-products that fall under a strong category of regulations. However, fluoroelastomers are not subjected to such severe regulations but the demand for Halogen free products across the world is increasing. This could affect the growth of fluoroelastomers market.

Fact.MR has studied the Fluoroelastomers market with detailed segmentation on the basis of polymer, end-use industry, applications and key regions.

What are the segments covered in the fluoroelastomers market report?

Fact.mr has studied the fluoroelastomers market with detailed segmentation on the basis of polymer, end-use industry, applications and key regions.

Which segment has the largest share in fluoroelastomers market?

Agc inc. Is one of the leading producers of fluoroelastomers in japan

The water treatment industry is anticipated to hold a sustainable share of nearly 20% of the sodium ...

Dimethicone Market is set to grow at a significant rate by 2028. The growing cosmetics & personal ca...