Owing to rapid growth of carbon black as a useful chemical, the global market is projected to grow substantially at a CAGR of around 6% over the decade, and top a valuation of US$ 30 Bn.

The latest study done by Fact.MR, a market research and competitive intelligence provider, estimates the carbon black market to contribute significantly towards global chemical industry GVA. This is mainly attributed to the usage of the material in a wide range of applications such as printing inks, packaging, plastics, and paints and coatings.

As per Fact.MR, the past half-decade has provided a strong base for the growth of carbon black chemical whilst growing with a CAGR of around 5.3%. Rise in demand for the product can be attributed to the mounting consumption in high growth regions such as North America and Asia Pacific.

Next ten years are vital for industry growth as market players are trying to leverage the rising need of high quality products such as paints, plastics, printing inks, and many more. Additionally, demand is also projected to be driven by the automotive sector owing to requirement of high-performance premium tires. Recent trends show there has been a surge in consumer demand for tire pressure monitoring systems, which is driving the tire replacement market, thus providing lucrative opportunity for carbon black companies.

Owing to these factors, the carbon black market is projected to expand its revenue 1.5X by 2031, while standing at around US$ 30 Bn during the same timeframe.

COVID-19 too had an impact on the revenue generation capacity of carbon black, which led to the downfall of market’s Y-o-Y. However, the market is projected to stabilize by 2021-end while expanding at a CAGR of around 6% over next ten years.

How Will Burgeoning Electric Vehicle Sales Spearhead the Demand for Carbon Black?

Automotive industry is projected to provide lucrative opportunity for carbon black industry owing to rising trend of tire replacement along with growing need of high quality and premium tires. Since tire industry captures around 3/4 of the total carbon black market, introduction of electric vehicle will spearhead the demand for tires made from carbon black over the assessment period.

Moreover, carbon black is a highly conductive additive and an essential material in lithium-ion batteries. This conductive carbon material covers the surface of the active material thus helping in flow of current.

Owing to above discussed advantages of material as conductive material along with rising need of electric vehicle to curb carbon emission, the sector is projected to provide high incremental opportunity of around US$ 90 Mn to carbon black market in next ten years.

Which Properties of Carbon Black Makes it Fit to be Used in Different Applications?

High tinting strength, thermal stability, electrical conductivity, and stable resistance are some of the properties shown by carbon black as a material that makes them fit for varied applications.

Based on Fact.MR analysis, printing inks application is projected to provide high absolute $ growth opportunity worth US$ 50 Mn in next ten years.

Which Obstructions are Poised to Lower Demand for Carbon Black?

Carbon black are materials made from hydrocarbons, hence, crude oil prices have a direct impact on its production cost. Additionally, over the past half-decade, there has been consistent fluctuation in crude oil prices, which is the main reason behind rising cost of carbon black. This has attributed significantly in lowering the popularity of the material, thus compelling tire manufacturers to shift to cheaper alternatives.

For instance, in 2018, three major carbon black producers paid nearly US$ 2.5 Mn in order to settle air pollution violations. This shows what lies ahead for carbon black manufacturers as environment regulations are projected to get stricter over the next ten years.

Above-discussed factors are projected to be an area of major concern, thus acting as a major hindrance towards market growth.

Which Region is Set to Provide Lucrative Opportunity for the Sales of Carbon Black?

East Asia is anticipated to drive carbon black consumption over the next decade. Currently, the region holds around 40% of total demand and is projected to increase its market share by around 200 BPS over the forecast period.

Demand for carbon black in East Asia will mainly be driven by the automotive industry. Over the past decade, there has been a surge in demand for commercial and passenger vehicles, which, in turn, has boosted sales of tires, driving carbon black demand.

These factors have contributed towards robust sales of the material in the region and the trend is projected to continue over the forecast period. Thus, East Asia is poised to provide high absolute $ opportunity worth US$ 1.9 Bn over the next ten years. 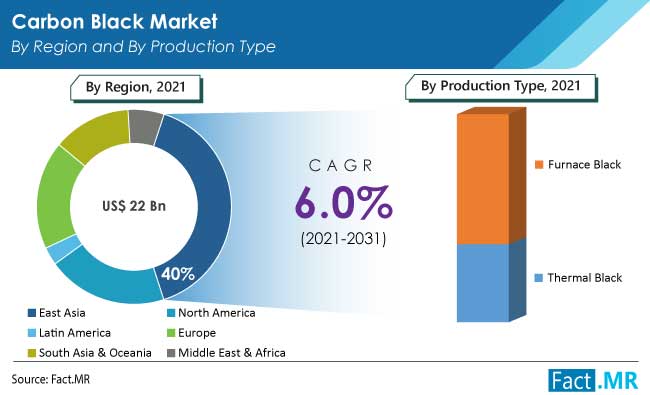 Why is China Seen as a major Participant in Bolstering Demand for Carbon Black?

More than 60% of East Asia demand is estimated to be driven by China. Also, China accounts for more than 40% of global carbon black production, which can mainly be attributed to the availability of low-cost feedstock along with low wage rates, and hence, lower production rates have been observed.

Additionally, rising consumption of paints & coatings coupled with mounting production of electric vehicles has provided the required push to the market in the country.

Moreover, major investments can be seen in the country in terms of production capacity expansion along with product development. Such surge in investments for carbon black material are projected to drive the market at a CAGR of around 7%, providing an incremental growth opportunity worth US$ 250 Mn over the decade.

How Had the Demand Scenario for Carbon Black in Established and Developed Countries?

India: India is estimated to be the most lucrative market for carbon black chemical in South Asia and Oceania, mainly attributed to surge in investments by prominent players in the country along with constant demand from the country’s robust automotive sector.

Additionally, demand for carbon black in the country has also been driven owing to its use in newspapers. For instance, there are more than 450 Mn newspaper readers in India demanding high quality printing. Thus, India is projected to provide high incremental opportunity worth US$ 80 Mn over the projected forecast period.

Brazil: Brazil’s automotive sector is robust with a global ranking of six. Additionally, the country is all set to see a surge in the penetration electric vehicles, which will bolster demand for the material.

Owing to these trends, the market in Brazil is estimated to expand at a high single-digit CAGR over the decade.

Germany: Major driving force for carbon black consumption in Germany will be the penetration of electric vehicles in the automotive sector. Additionally, a recent announcement by government on infrastructure and housing projects has provided a  positive outlook to the paints & coatings industry, thus propelling the use of this chemical.

Hence, Germany is poised to be the torch bearer for the European carbon black industry.

U.S.: After China, the U.S. is projected to be the second-most lucrative market for carbon black consumption. Consumer demand for high quality and premium material in their vehicles will be a major factor behind mounting consumption.

Additionally, North America is well established due to the concentration of some big players in the region. Thus, high absolute $ opportunity worth US$ 100 Mn is projected to be generated by the country.

Which Grade Carbon Black is projected to hold Majority of the Shares?

Standard grade carbon black is the most widely used material owing to its cost effectiveness along with widespread popularity in tire components. Additionally, standard grade provides strength, durability, and high performance, which are major factors behind its rising consumption.

For instance, around 90% of total demand in market is for standard grade, and hence, the segment is poised to provide high absolute $ opportunity over the forecast period.

Which Application is projected to propel the Sales of Carbon Black?

Carbon black has been historically driven by sales of tires accounting for around 70% of total demand. Production of new vehicles along with growing disposable income in developed economies is projected to open new avenues for chemicals in the market.

Further, it has been estimated that around 2/3 of total demand will be driven by tire replacement needs. Moreover, introduction of electric vehicles in the automotive sector will provide the required push needed in the market.

Thus, owing to the above factors, the tire application segment is projected to increase at a CAGR of around 5.8% over the next ten years.

How Has COVID-19 Impacted Revenue Generation from Carbon Blacks?

The COVID 19 pandemic has impacted sales of carbon black owing to its decreased usage in the automotive sector. Y-O-Y growth of revenue contracted 1.9% in 2020 when compared to 2019. This contraction can be attributed to decrease in demand from paints & coatings along with downfall in sales of automotive components.

However, the market is projected to stabilize owing to positive rise in sales of automotive components and specialty carbon black material. 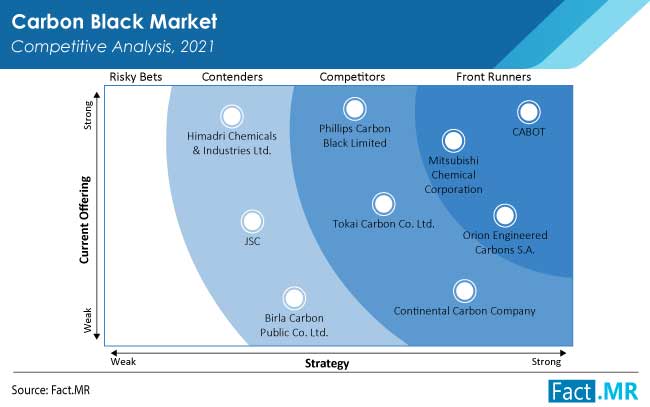 In order to expand their market share, key players have opted for both, organic and in-organic growth strategies such as acquisitions, collaborations, and partnerships. These have been identified as positive strategies that have helped them garner market share over the past half-decade.

Similar recent developments related to companies offering carbon black business have been tracked by the team at Fact.MR, which are available in the full report.

How much is carbon black market current worth?

Currently, the global carbon black market is worth more than US$ 22 Bn.

At what CAGR is the market expected to grow through 2031?

What was the performance of the market in the last five years?

What are a key trend boosting carbon black sales?

Increased use case of carbon black for application in tires is projected to drive demand over the next ten years.

How are players reacting to new developments in the market?

Market players are majorly opting for capacity expansion, collaborations, and innovation to be in sync with new developments.

How much market share is held by the top 5 companies?

Which are the major countries driving demand for carbon black?

What outlook does the East Asia market provide?

Which key countries are major producers of carbon black?

China, the U.S. and India are major carbon black producers.

At what rate is the U.S market projected to grow?

The U.S. market is projected to progress at a CAGR of around 6.3% over the next ten years.

The carbon fiber filament market is set to witness strong growth during 2018-2028. The rise in deman...

Activated Carbon Market is expected to reach a valuation of US$ 4 billion and grow at a CAGR of 5% b...