As per Fact.MR estimations coating binders market value to reach USD 50,563 million valuation by 2032 end, and shall account for about 20% of the overall polymer binder market value during the same period.

In the meantime, coating binder consumption is projected to increase with a CAGR of around 3.1% over next decade while being valued at USD 50,563 million by 2032 end, evaluates Fact.MR- a market research and competitive intelligence provider.

Moreover, production of coating binders stood at around 40.1 Kilo tons in 2021, accounting for 23.5% of total binder production and is poised to grow with a CAGR of around 2.8% with production projected to reach 48.7 Kilo tons by 2032 end.

As per Fact.MR- a market research and competitive intelligence provider, global coating binder consumption over past half decade grew with a CAGR of around 2.5%. While global volume consumption in 2021 end stood at around 40.1 Kilo tons. Application which saw major consumption of coating binder was architectural coating segment. This can mainly attributed to rapid urbanization that has taken place along with growing interest among household to provide durability and protection to their exterior walls.

Additionally, projections are that growing demand for chemicals which can provide gloss retention, tint retention, and resistance to blistering, cracking and flaking will provide thrust to the production of coating binders over next decade, especially in regions such as China and India. 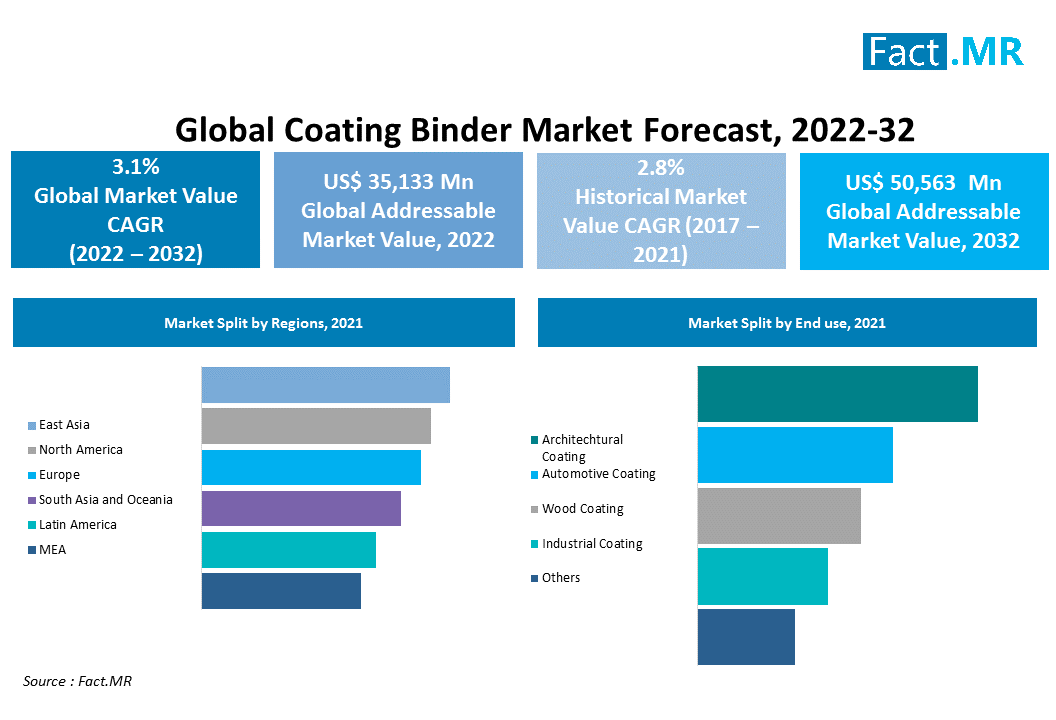 Over the past half-decade, consumers have not only opted for coatings in order to provide protection to the exterior and interior of the walls but are also demanding aesthetic looks with glossing effect. Thus in order to satisfy consumers need for high performance paints, market players are investing in development of  binders which can provide adhesion without compromising on aesthetics.

Moreover, rise in DIY activities has provided major boost to the consumption of paints and coatings thus driving the demand for coating binders.

According to the latest report published by UN, by 2030 around 60% of the total population is projected to live in urban areas totalling 4.9 Billion. This is an increase of 13% from the year 1999. Also, around 60% of total increase in urban population will occur in Asia towards which China and India will be a major contributor.

This surge in growth of urban population will boost the demand for housing activities which is poised to drive the paints and coatings market in the region. Moreover, since coating binders is an essential material for ensuring adhesion and providing glossing effect to the exterior and interior of the walls, increase in housing activities will have direct impact on consumption growth of binders.

What Makes Europe Region of Prominence for Coating Binders Sales?

Europe’s market has evolved great deal. Consumers now prefer buying paints which have minimal environmental effect. Moreover, consumers in Europe now prefer paints which not only comes equipped with adhesion properties but also looks aesthetic. This has led to rise in consumption volume of waterborne coatings in the region.

Additionally, Europe’s coating binder demand is mainly driven by its increased usage in buildings, accounting for around 60% of total regional consumption. Further EU is spending considerably on infrastructure development such as construction of houses. For instance German government has constructed around 1.5 million housing units in 2021 has giving  major push to the European coating binder segment

Which Product Type have Contributed Significantly towards the Growth of Coating binders?

Alkyd based coating binders has contributed significantly towards the market growth. This is mainly attributed owing to various properties such as high resistant towards chemicals, cleared and polished look, and easy to work with.

Additionally, consumption of alkyds for binder manufacturing stood at around 9,473 Kilo tons in 2021 which accounts for 23.6% the total coating binder volume share. In terms of value, in 2021 alkyds was valued at USD 7,284.1 million and holding around 21.5% of the global share.

Thus alkyds for coating binders is poised to provide high absolute $ opportunity over the projected forecast period thus growing with a CAGR of 3.2% over next decade.

For which application will coating binder consumption will be the highest?

Coating binders is projected to consume more in terms of both volume and value for architectural coatings. This is mainly attributed to growing investment in housing and building construction especially in high growth regions of Asia Pacific.

Coating binder consumption value is expected to grow at a CAGR of around 3.1% during the period 2022-2032.

Key players can been mainly seen involved in development of new and high performance polymers and resins which has high solvency ratio in paints and coatings.

China is estimated to hold around 32% of the global coating binders market.

*122 figures and 83 tables includes by FactMR