Globally, coating solvent market is now experiencing a solid growth with a collective CAGR of 4.4% surpassing a net valuation of USD 8,844 Million by 2021.

The demand for coating solvent is mainly attributed to wide use case including aerospace, automotive, manufacturing etc. It has been analyzed that coating solvents accounts nearly 18% of the value share in overall solvents market. This in turn offers coatings solvent as prime ingredients in several other downstream coatings, providing significant momentum to global solvent market during the assessment period.

Paints & coating solvents are expected to witness confinements of regulations imposed by environment regulatory authorities such as EPA’s National Emission Standards for Hazardous Air Pollutants (NESHAPs), which has resulted in restrictions in application of hazardous coating solvents.

Additionally, programs such as the Clean Air Act Amendments (CAAA) and Emergency Planning and Community Right-to-Know Act (EPCRA) for reducing air pollution further put constraints on use of solvents, which has become mandatory for coatings formulators and end-users to comply with.

These regulations will continue to impact prospects of the coating solvents in the near future, in turn driving demand for alternatives such as water-borne coatings and bio-based coating solvents.

Historically, expansion strategies of coating solvents manufacturers include partnerships and collaborations with emerging players to leverage their innovative capabilities and enhance regional market footprint has been the key business driver for global coating solvent market. This in turn has resulted in coating solvents consumption of 13.2 Kilo Tons during 2021.

Covid-19 has adversely impacted the overall market dynamics. In addition, manufacturers where seen facing challenges associated with procurement of raw material utilized for coating solvent production. Moreover, there has been a steep improvement seen in the supply chain capabilities after 2020, which has lowered the raw material sourcing and procurement risks faced by manufacturers during 2020 crisis.

On the other side of the plot, 2021-2032 forecast is seen as most profitable for the coating solvent business gaining 150 BPS with surpassing net valuation of USD 14,250 Million by 2032 end. During this period, demand for coating solvents shall elevate on the back of rising government regulations for VOC free coating solution in all types of coating downstream.

In addition, according to the American Coatings Association, industrial and architectural coatings market has increased rapidly over the past few years owing to widespread adoption of solvent based coating in industries. This growth is ideally underpinned by growing investments offered by companies to cater the need for coating services in different industries including automotive, aerospace, defence etc.  In addition, this rapid increase in the solvent based coating adopted by the automotive industry for higher wear resistance capabilities, has translated a significant increase in demand for coating solvents globally.

How is the China coating solvent market performing?

China has been the prime consumer of the overall coating solvent demand. This is attributed to widely scattered key consumers including all the downstream end use industries positioned in China. In addition, China is anticipated to add 1.7X valuation by 2022 end in overall coating solvent revenue. Furthermore, China accounted more than 20% of the revenue share in the global coating solvents business during 2021.

Considering the aforementioned factors, China to projected to gain 200 BPS during 2022-2032 assessment period and shall surpass valuation of USD 2,676 Million by 2032 end. 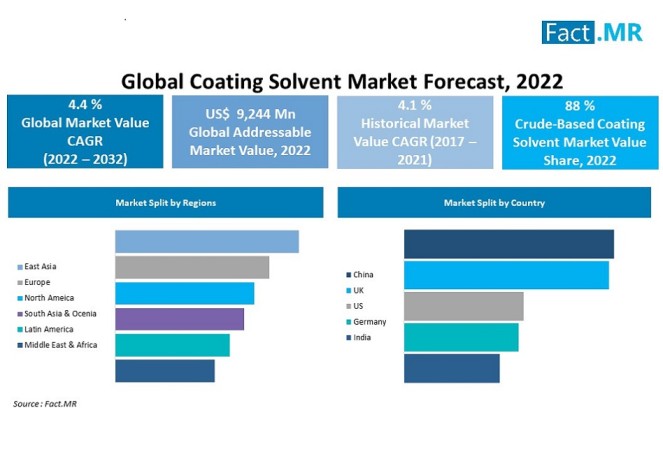 Which Coating Solvent Gained Momentum during the assessment period?

Which Source for Coating Solvents Remained most Lucrative?

Characterized by the occupancy of well-established and diversified regional and international vendors, the global market for coating solvent is fragmented in nature. While international players in the market are concentrating on extending their footprint, regional players are facing challenges in competing them based on cost, technology, and product quality. Marketing strategies such as merger and acquisitions, expansions, new product launches and product innovation can be adopted by key players in the market in order to upswing their market presence and create a larger customer base.

What is the global scenario of coating solvent market?

The global coating solvent market is estimated to be worth over USD 9,244.9 Million by 2022

At what value the demand for coating solvent is expected to arrive over the forecast period?

The global demand is anticipated to surpass a value of USD 14,250 Million by 2032 end

At what rate the demand is anticipated to grow over the assessment period (2022-2032)?

What was the historic CAGR for the demand in the coating solvent market?

Who are the prominent players in the global coating solvent market?

BASF SE, Dow Chemical Company, ExxonMobil and Royal Dutch Shell are the most prominent players in the coating solvent market

Which are the dominant countries in the coating solvent market?

The US, China, UK and India are the dominant countries contributing to high demand for coating solvent

Worldwide demand for isophorone is expected to increase at a CAGR of 4.7% and is anticipated to reac...

The trimethylcyclohexanone market is set to witness steady growth during 2018-2028. Growing demand f...

Food Marking Inks Market to witness steady growth by 2028. Increase in the occurrence of counterfeit...