Beach towels are of finer quality and are often larger than regular towels as they are largely used to recline on the sand at the beach. These towels are typically used for sunbathing, relaxing on the sand, and drying off after swimming.

Beach towels are also utilized by people when they need to change their attire on the beach itself and don't want to go indoors for this purpose. Beach towels come in a variety of tones and hues, making them easy to identify.

The increased interest among travellers in beach tours is one common yet significant reason driving the growth of the beach towel industry. Beach towel sales are also increasing with the rising number of couples across the world visiting beach tourist destinations. 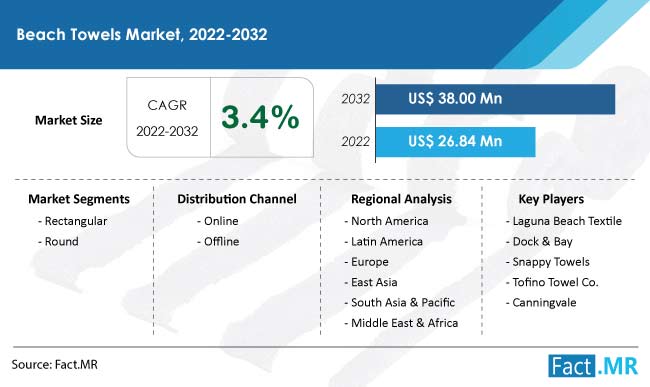 The growing craze among tourists for beach vacations is one of the frequent yet important factors boosting the growth of the beach towel industry. Beach vacations are becoming increasingly popular among couples, fuelling strong demand for beach towels.

Sunbathing is highly advised due to its therapeutic benefits. Bacteria can be killed by sunbathing.

Due to the therapeutic effects of sunbathing, most travellers are choosing to visit beaches for vacation, boosting sales of beach towels.

Tourists are staying away from beach vacations due to an increase in natural disasters, such as tsunamis. Additionally, diseases brought on by mosquito bites are more common at certain beaches.

Travellers may want to steer clear of beach holidays, especially in the current climate where deadly diseases like dengue and malaria are growing rapidly. These factors collectively may hamper the growth of the beach towels market.

How are Start-ups Making a Space in the Beach Towels Market?

The idea of a beach towel has been reimagined by a new company called Vertty. The concept behind it is to bring urban elegance to a seaside setting that is more laid back.

The brand aims to unlock the full potential of a fundamental good with a distinctive design and vibrant variation. Beach towels are intended to become fashionable accessories by being given a global soul by Vertty.

Vertty’s towels, which are developed in Australia and created in Portugal, have already been exported to 40 different nations, ranging from Peru to South Korea.

This way, new companies can make a mark for themselves in this competitive space by coming up with unique and novel products.

Which Regional Markets are Profitable for Manufacturers of Beach Towels?

Due to rising disposable income, expanding urbanization, and rising purchasing power, the beach towel market is experiencing substantial growth in developed regions such as North America and Europe.

The market for beach towels in these two regions is anticipated to increase in the coming years. While in less developed regions such as MEA, affordability and lack of purchasing power are impeding the sales growth of the beach towel market.

Which Beach Towel Fabric is Most Popularly Used?

“Microfiber Beach Towels Most Preferred Due to Effective Medical Qualities”

Because of microfiber's numerous demonstrated advantages, such as their potent ability to effectively capture microorganisms and avoid cross-contamination, microfiber beach towels are typically preferred by the majority of people.

The market for beach towels will expand as a result of increased technological innovation and the e-Commerce sector.

Customers typically prefer purchasing beach towels online since it gives them the choice of selecting towels from a vast variety of brands and kinds.

What is the Competitive Atmosphere for Beach Towel Manufacturers?

Many fabric manufacturers are experimenting with fresh ideas for the materials used to make beach towels. To make the towel sand repellent, eco-friendly, antibacterial, lightweight, and quick to dry, some businesses even use recycled cloth.

Sand can simply slide off towels made of cutting-edge materials rather than getting caught in the fibres like it would with a typical cotton towel.

Additionally, businesses are working to create towels that can hold three times their weight in water and are extremely portable, allowing a full-sized towel to be folded up to the size of a large burrito when the room is at a premium. Therefore, the development of fabric innovations employed in towel design would support manufacturers' revenue growth.

To work together to provide high-quality beach towels, major players in the market for beach towels are concentrating on product innovation and strategic alliances with technology providers.

The global beach towels market is likely to expand at 3.4% CAGR through 2032.