Global infant nutritional premix market is projected to grow at a healthy CAGR of 5.6%, to be valued at US$ 315 Mn by 2028 end. In recent years, there has been significant growth in the birth rate in developing countries which has led to an increase in demand for infant formula-based products.

According to the Population Reference Bureau, the world population in 2015 was 7.3 billion, and is estimated to increase to 9.8 billion by 2050, which is likely to fuel the demand for infant milk formula-based products in the country.

Vitamins accounted for over one-third of the infant nutritional premix market revenue in 2018 and this category is also expected to witness a growth of over 5% during the forecast period.

The use of nutrient premixes in infant nutrition is increasing globally due to the rising consumer preference for nutritional fortification of infant formula and baby food products.

Infant formulas are mainly fortified with iron and vitamin D for babies who are not being breastfed, along with ingredients such as DHA (docosahexaenoic acid) and ARA (arachidonic acid).

The growing premix consumption across the globe, is, in turn, expected to boost the growth of the Infant nutritional premix market. 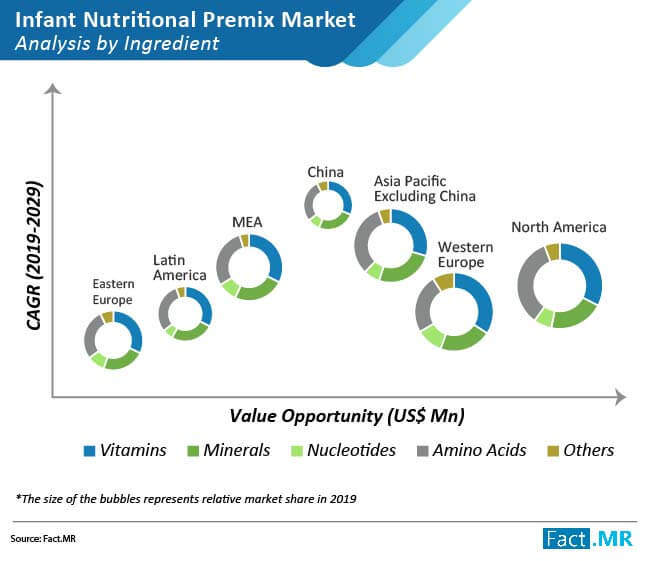 Powder form of infant nutritional premix accumulated largest revenue share in 2018 and it is expected to continue on a steady growth trajectory with a CAGR of 5% during the forecast period.

The demand for premixes in the powder form is increasing at a significant rate, in both, developed and developing countries. This is attributed to the properties of powder, such as easy solubility in water.

A prominent shift from liquid to powder form is projected to be observed in the forecast period.

Bone health function type of infant nutritional premix created maximum absolute $ opportunity in the historic period (2013 – 2018) and is expected to continue the trend in forecast period (2019 – 2028).

The demand for vitamin D in premixes is growing due to an increase in various bone health-related deficiencies among infants, globally. Many manufacturers are providing premixes related to bone health, with customized blends of vitamins, minerals, and amino acids.

Emerging Countries to Top Market Share Chart by End of 2028

A consistency in demand for infant nutritional premixes has been observed in developed countries. However, emerging economies’ consumption of human nutrition products has increased owing to the increased spending on nutrients and minerals, especially for infants.

This trend is seen in consumer-driven markets such as China, India, Mexico and Brazil etc. Asia Pacific, MEA, Eastern Europe and Latin America are projected to hold around half of the market share by end of 2028. These regions are projected to grow at a higher CAGR than that of global infant nutritional premix market. 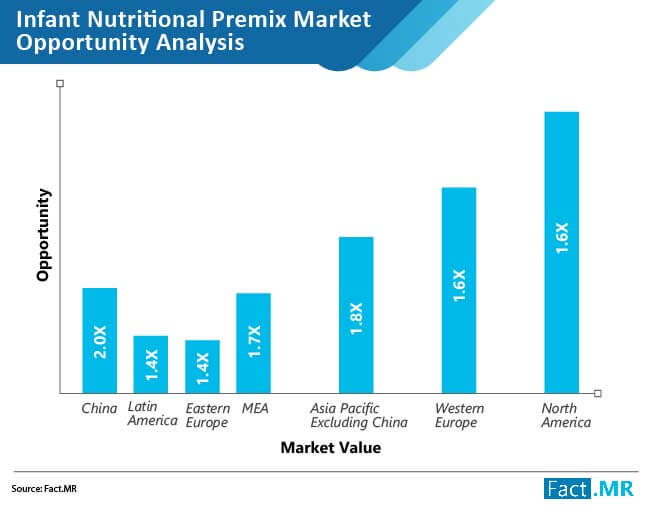 Acquisitions Coupled with Investments in Infrastructure to Stimulate Revenue Growth

Market leaders are maintaining strong position owing to strong Internationalization of companies through acquisition and set up of subsidiaries across the globe. In addition, companies are investing in infrastructure to grow their R&D and production capabilities.

For Instance, Koninklijke DSM NV. acquired AVA in November 2019 in order to strengthen its position in personalized nutrition and in November 2017, DSM expanded its strategic alliance with Amyris and acquired the Brazilian production facility from Amyris.

In March 2017, BASF SE invested up to US$ 59 million to establish a research & development campus in Mumbai, India.

Fact.MR’s study has done the segmentation of infant nutritional premix market on the basis of form, ingredient, function and region.

Study offers a comprehensive overview on diverse features that are inducing demand, revenue generation and sales in infant nutritional premix market across the globe.

A comprehensive estimate on infant nutritional premix market has also been made accessible by the experts, who have considered the market estimates on the basis of a likely scenario, an optimistic scenario, and a conservative scenario regarding sales of infant nutritional premix during the forecast period. Analysis and estimation of price point comparison by region and by form with the global average price has been included in this study.

Predictions of infant nutritional premix market, encompassing current as well as forthcoming projected values estimates and analysis on region-wise demand trends and price index have been assimilated in the report.

Country-specific valuation on demand for infant nutritional premix has been offered for each regional market, along with the market scope estimate and forecast, price index, price point assessment, and impact analysis of dynamics of prominent regions and countries. For all regional markets Y-o-Y growth estimates have also been incorporated in the report.

The report ends with a section on the competition scenario of infant nutritional premix market, along with the profiles of major companies contributing to the market expansion. Essential and up-to-date data as well as information correlated to the market performers, who principally engage in the production and supply of infant nutritional premix, has been brought with the help of a detailed dashboard view. Market share analysis and comparison of prominent players provided in the report permits the report readers to plan preemptive steps to advance their businesses.