The global nutritional yeast market accounts for US$ 428.1 million at present and is anticipated to reach a market valuation of US$ 999.5 million by the end of 2032. High market expansion is because worldwide consumption of nutritional yeast is predicted to surge ahead at a CAGR of 8.8% between 2022 and 2032.

Nutritional yeast is an important ingredient in a plant-based or vegan diet as it is a rich protein source. The yeast is obtained by growing it on molasses, just like it’s done for bread and beer.

Nutritional yeast popcorn is anticipated to witness a rise in popularity as a healthy snack among vegans across the world. Increasing prevalence of food allergies, gluten intolerance, and lactose intolerance is projected to drive substantial demand for nutritional yeast powder in the years ahead.

The global market for nutritional yeast is predicted to expand at a noteworthy CAGR of 8.8% over the next ten years (2022-2032). 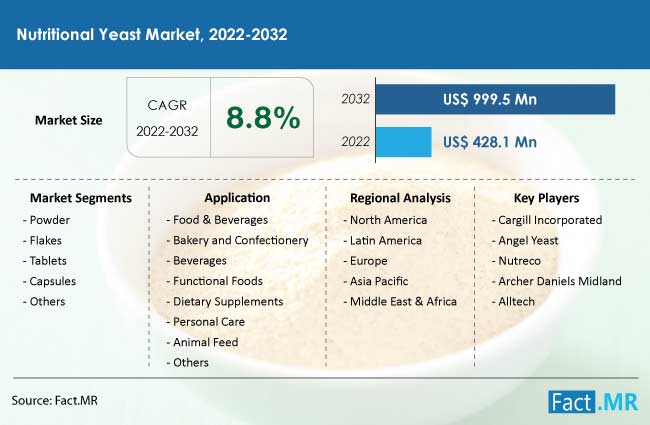 Veganism has emerged as one of the most popular food trends over the past few years and is expected to gain further popularity going forward as well. Vegans follow a string plant-based diet, and since plant-based protein sources are limited, the addition of nutritional yeast to vegan food products increases their protein content.

Vegan yeast is anticipated to see high demand across the world over the coming years.

What Could New Entrants Do to Gain a Prominent Market Share?

Aspiring manufacturers of nutritional yeast can explore its use in such products and create new products that could disrupt the market and help them gain a significant market share.

Apart from this, start-ups in the market can focus on creating innovative vegan products that could take the nutrition of nutritional yeast to a different flavor profile, to stand out from the competition.

Which Regions Will Provide Attractive Opportunities for Nutritional Yeast Suppliers?

Currently, the Europe nutritional yeast market accounts for sales of US$ 150 million and a major market share of 35% in the global landscape.

Rising inclination of consumers towards vegan and plant-based foods is anticipated to be a major factor driving nutritional yeast demand in the region.

Germany, France, and the United Kingdom are projected to be the most lucrative markets in Europe across the forecast period.

The market for nutritional yeast in North America holds a share of 24.5% in 2022 and accounts for a valuation of US$ 104.9 million.

Increasing popularity of veganism, rising demand for plant-based products, and growing awareness of food allergies are factors driving the shipments of nutritional yeast in the region.

The United States and Canada are projected to be the most notable markets in the North American region over the coming years owing to rising demand for plant-based foods.

The Asia Pacific region is projected to witness a steady rise in demand for nutritional yeast as the popularity of veganism increases and more individuals turn towards plant-based diets.

The China nutritional yeast market accounts for a value of US$ 35.1 million in 2022 and a market share of 8.2%. Increasing adoption of vegan and plant-based food by the millennial population in the country is expected to drive nutritional yeast consumption.

This new research by Fact.MR, a market research and competitive intelligence provider, has provided a detailed regional analysis of all current and forecasted market trends for the global nutritional yeast industry.

Nutritional yeast manufacturers are focusing on launching new products with different flavors to diversify their offerings and increase their sales potential over the coming years.

Consumption of nutritional yeast is anticipated to surge at 8.8% CAGR through 2032.

The North America nutritional yeast market is valued at US$ 104.9 million.

*127 figures and 30 tables includes by FactMR