Heavy commercial vehicles coupled with long trailers are used which generally require around 6-8 wheel Axle in order to achieve the equilibrium of load distribution. Therefore, an increase in the demand for long trailers over the forecast period will subsequently increase demand for wheel Axles.

The global wheel axle market is projected to create an absolute $ opportunity of more than US$ 23 billion, to be valued at more than US$ 87 billion by the end of the forecast period (2019 – 2029), predicts the report recently published by Fact.MR.

The governments in developing countries are increasing their focus on expanding transit facilities in their regions, owing to the growing population and rapid urbanization. The demand for rolling stock such as locomotives, carriages, and wagons is growing, as rail-vehicles possess high transportation capacity compared to other modes.

Besides, privatization of the rail in Japan has encouraged leading players to manufacture enter into the business of rail transportation which has boosted rolling stock production in the region, which supports the growth of the wheel Axle market.

Thus, increasing demand for rolling stock supports the growth of the wheel Axle market. Fact.MR opines that rail end-use segment is estimated to create an absolute dollar opportunity US$ 135.6 Mn, and is expected to grow at a CAGR of 4.4% during the forecast period (2019 – 2029).

Light commercial vehicles such as pickup trucks and sports utility vehicles which generate a drive torque of 300 – 600 Nm have been increasing, owing to benefits such as high load-carrying capacity as well as comfort while driving.

In the Fact. MR’s report, it is projected that the wheel axles required for vehicles with drive torque between 300 – 600 Nm will hold one-third of market share in terms of value and are anticipated to grow at a CAGR of 3.3% by the end of 2029. 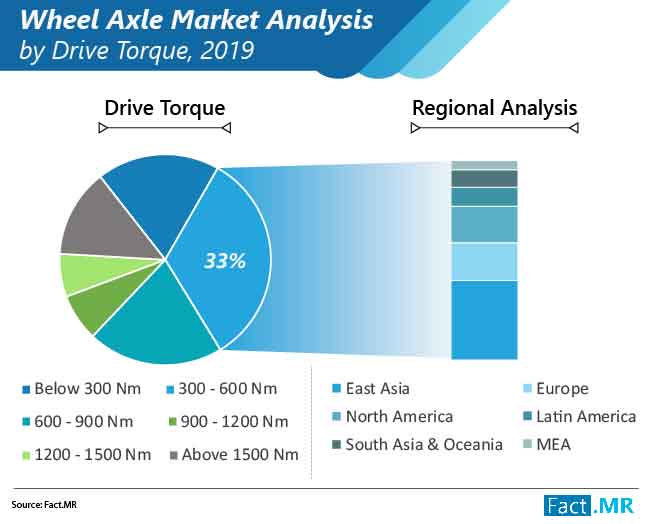 Rapid industrialization in the leading oriental countries such as China, Japan, and South Korea has given impetus to the economy of the region. East Asia has become the manufacturing hub of the world, especially for automotive production.

China has emerged as the leading manufacturer of automobiles in the world with more than 25 million motor vehicles produced in the country in the year 2018. Therefore, East Asia has become a prominent market for manufacturers of wheel Axle. Fact.MR anticipates that East Asia is projected to hold more than 41% value share of the global wheel Axle market during the forecast period.

Manufacturers Focused on Expansion through Acquisitions and Product Launches

Market leaders are maintaining a strong position owing to the robust internationalization of companies through acquisitions and set up of subsidiaries across the globe. Besides, companies are introducing new products to expand in the market. For instance, in January 2020,

The growth rate of the global Wheel Axle market is 4.4% CAGR

The global Wheel Axle market is segmented on the End-Use, Drive Torque, and region.

*95 figures and 84 tables includes by FactMR