The United States hybrid electric vehicles market expanded at the rate of 10.3% from 2017 to 2021. According to Fact.MR, a market research and competitive intelligence provider, the U.S. market is projected to surge ahead at 13.8% CAGR through 2032. 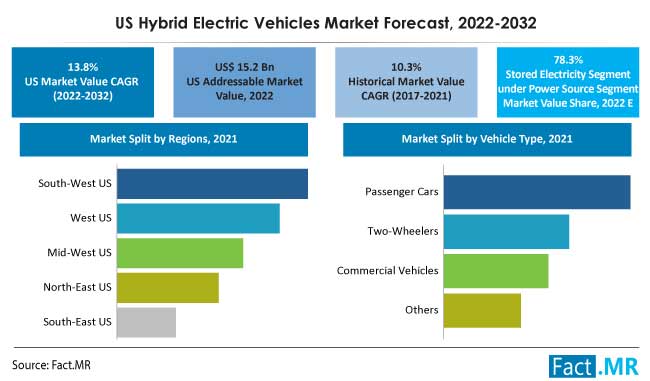 Why are Hybrid Electric Vehicle Sales Surging across the U.S.?

Electric vehicles aid in improving fuel economy and reducing carbon emissions. The transportation sector in the United States accounted for nearly 30% of total U.S. energy needs and approximately 70% of the United States' consumption of petroleum.

The use of energy-efficient vehicles, such as electric automobiles, can aid in supporting the economy and lead to the diversification of the transportation fleet. Several fuel sources to generate electricity are resulting in a more secure energy source for the electrified portion of the transportation sector, leading to the security of the nation.

In addition, hybrid electric vehicles (HEVs) use less fuel than conventional vehicles as they come with electric-drive technologies, thereby boosting vehicle efficiency via regenerative braking. These electric vehicles are capable of being powered solely by electricity.

All these factors will go on to support hybrid electric automobiles market growth in the U.S, during the forecast years of 2022-2032.

The fuel efficiency of hybrid electric vehicles is being revolutionized with the help of newer and smarter algorithms. Electric vehicles are dependent on an energy management system, helping them to maintain an equilibrium between the internal combustion engine and the electric motor. Technical teams at several universities are now developing highly-nuanced algorithms to calculate the optimum energy consumption of vehicles.

As these algorithms are highly complex, upcoming research is likely to focus on reducing the computational efforts of algorithms to improve drivability. Overall, this increase in fuel efficiency is anticipated to bolster demand for hybrid electric vehicles in the U.S. market during the forecast years.

The South-West U.S. hybrid electric vehicles market dominates with 29.8% share in the overall market and is projected to rise at the rate of 14.6% CAGR during the assessment period.

The region will witness significant uptake in infrastructure, costs, and product innovation as President Biden announced that by end of 2030, approximately 50% of new vehicles sold will be all-electric, plug-in hybrid, or hydrogen-powered vehicles.

It was also announced that the National Highway Traffic Safety Administration (NHTSA) and Environmental Protection Agency (EPA) will be tasked with developing aggressive long-term rules to support 2030 targets, including medium and heavy-duty vehicles.

Stored electricity vehicles dominate the market with 78.3% and are projected to rise at 14.1% CAGR over the assessment period. Segment growth is attributed to the several benefits offered by stored electricity hybrid electric vehicles. For instance, they reduce fuel costs and aid in achieving better fuel economy.

On-board electric generator vehicles hold 21.7% share in the overall market and are projected to register 13.6% CAGR during the forecast years.

Under vehicle type, the hybrid electric automobiles market is segmented into passenger cars, commercial vehicles, two-wheelers, and others.

The passenger cars segment dominates the market with 37.8% share. The segment is projected to expand at 14.4% CAGR over the decade.

Seeing this trend, companies are launching electric vehicles into new areas such as serving urban transportation demands such as taxis, supporting segmental growth.

Two-wheelers and commercial vehicles hold 25.4% and 21.2% share, respectively, in the overall market. Both these segments are projected to rise at 13.9% and 13.5% over the decade.

The U.S. market for hybrid electric vehicles is in its nascent stage and is likely to propel on the back of healthy investments, both from market players and the government. Along with this, rising infrastructure is also poised to support market growth over the coming years.

Rising interest in electric vehicles on the back of emission control needs presents lucrative opportunities for new manufacturers to enter the market. Additionally, prominent market players are investing in research and development to innovate their product offerings and offer fuel-efficient hybrid vehicles over the coming years.

What is the U.S. hybrid electric vehicles market size?

At what CAGR did the demand for hybrid electric vehicles increase over the past 5 years?

Over the past 5 years, hybrid electric vehicle sales increased at 10.3% CAGR in the U.S.

Which U.S. region accounts for the highest sales of hybrid electric vehicles?

Which power source is the most popular across the landscape?