Upsurge in the military spending by prominent countries has been observed in the last five years. Heightening safety concerns for citizens, territories, and public wealth, coupled with improved economic conditions have led to this increase.

In the year 2019, the US spent around US$ 684.6 billion on its military and defense operations which represents approximately 3.2% of the country’s GDP. The country has registered around 18% increase in the military spending since last five years.

Countries are procuring and manufacturing advanced weapons in order to improve capabilities of their military.

The global military rifle market is projected to be a multi-billion dollar market by the end of the forecast period (2019 – 2029), predicts the report recently published by Fact.MR.

Assault rifles are originally designed for combat operations for militaries but they can be also used for long range firing such as 300 meters to 1000 meters.

Accuracy of the assault rifles during cyclic fire and high fire, such as 600 rounds per minute makes it the most favoured weapon in the world’s largest and most advanced armies.

Countries prefer to buy assault rifles for their internal security forces such as police and army groups who operate in populous areas. Countries are investing substantial amount to increase size of their fleet for assault rifles.

For instance, in February 2019, Indian government signed a contract worth US$ 94 million with the US based firearm manufacturer Sig Sauer to procure 72,400 SIG716 assault rifles.

Fact.MR opines that assault rifles are estimated to hold around a quarter of the revenue share of the global military rifle market, and are poised to grow at a mid-single digit CAGR in terms of value during the forecast period (2019 – 2029).

The demand for fully automatic military rifles are witnessing an upsurge owing to numerous functional benefits it offers such as uninterrupted, automated and high rate of fire, intermediate cartridge and reduced recoil which makes it the most suitable rifle during situations like military conflict.

In the Fact. MR’s report, it is projected that the fully automatic military rifles are anticipated to grow at a higher single digit CAGR in terms of value by the end of the forecast period. 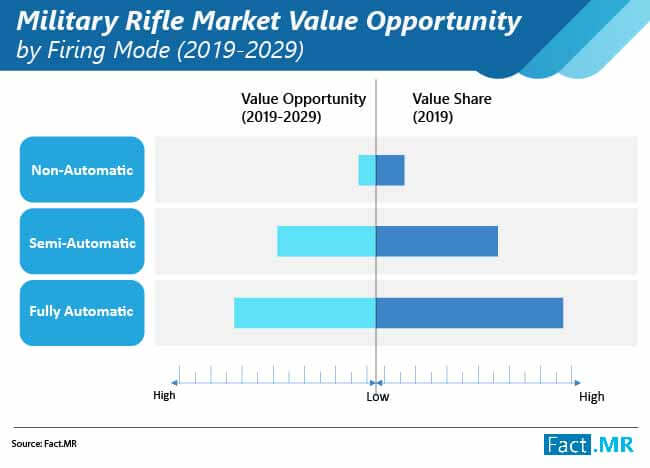 Substantial increase in the military spending over last five years owing to continuously improving economic conditions, has led to developing countries such as China and India to leverage the immense opportunities in the global military rifle market.

While North America is expected to continue its hegemony as the market leader, East Asia is expected to grow at a high growth rate, predicts Fact. Mr’s recently published report. 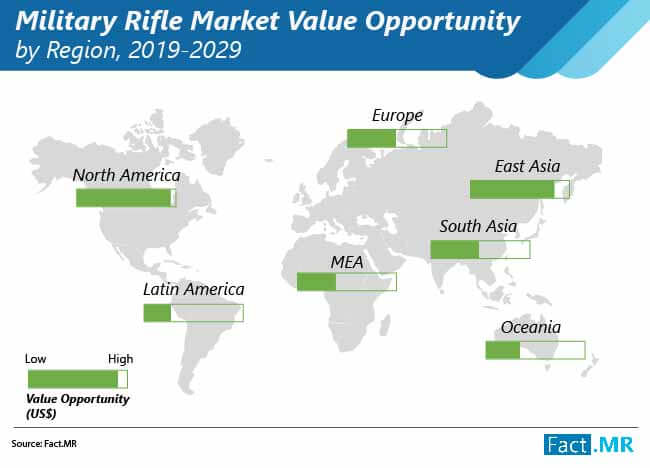 For instance, in March 2019, three firearm manufacturers such as the Indian Ordnance Factory Board, and JSC Rosoboronexport and Kalashnikov Concern have formed a joint venture to manufacture Kalashinkov’s AK-200 series’ assault rifles AK-203 in India.

The largest segment in the Military Rifle market is Product.

The global Military Rifle market is segmented on the type of product, range, firing mode and region.

*136 figures and 72 tables includes by FactMR