The global physical vapor deposition market is expected to grow significantly, reaching US$ 43 Billion by 2032 at a 6% CAGR between 2022 and 2032. According to the report, the market was worth US$ 23 Billion in 2021. Factors such as rising demand for eco-friendly coating processes and medical equipment are expected to drive product demand in the coming years.

During the historical period, the PVD market grew at a CAGR of 2.6%, from 2015-2021, as per market research and competitive intelligence provider Fact.MR. Growth in end-user industries such as microelectronics and medical equipment has primarily increased the global PVD market in the past. Furthermore, operational advantages and eco-friendliness were expected to drive the PVD market.

The PVD coating is gaining traction, particularly in the automotive industry. Companies have been able to achieve full recyclability for automobile components by using thin metal layers. Furthermore, PVD coatings do not emit Volatile Organic Compounds, which is expected to boost PVD demand during the forecast period.

Sputtering technology in PVD has several advantages over other technologies, including higher packing densities and improved adhesion. Furthermore, sputtering can be performed on a broader range of metals, such as alloys and mixtures, which is expected to drive up demand for sputtering systems over the forecast period (2022-2032), growing at a 6% CAGR.

These materials are coated with corrosion-resistant electroplating to improve the surface finish. Furthermore, they provide superior performance while posing no environmental risks. As a result, the high demand for eco-friendly coating processes across a variety of industrial applications is expected to drive market growth during the forecast period.

Physical vapor deposition is being used more frequently in the production of low-e glass for the construction and automotive industries, which is expected to drive market growth. PVD materials for Low-E glass coating include aluminum and aluminum alloys, silver, copper and its alloys, and chromium.

Digitization has played an important role in shaping economies over the years by opening up new business opportunities and increasing productivity. Productivity increased in sectors with a higher level of digitization. Digitization has been used by industries such as media, finance, travel, healthcare, retail, and manufacturing to improve connectivity and establish a resilient value chain.

The Electronics System Design & Manufacturing (ESDM) industry is expected to grow significantly during the forecast period due to the favorable growth of these end-use industries. The growing importance of artificial intelligence and machine learning is driving up global demand for electronic goods. Physical vapor deposition technology is helping to improve the performance of electronic components.

In the automotive industry, for example, the transparent and thin nature of the coating allows light and electromagnetic waves to pass through the coated components. It is critical that multi-sensor technology be integrated into the latest generation of automobiles. It also helps to improve the aesthetics and safety features of electronic components in vehicles. Huge investments by public and private stakeholders, backed by strong policy support, and continuous rising demand for electronic products are expected to contribute to the global market's growth in both developed and emerging economies.

Some of the processes operate at higher temperatures and in a vacuum. As a result, special attention and a technically skilled workforce are required to achieve the desired results. The high temperature necessitates the installation of cooling water systems to channel large heat loads. Such factors significantly reduce the overall cost of service. As a result, the higher cost of this technology sometimes limits its adoption over alternative technologies.

Prices of common materials used in these coatings, such as chromium, zirconium, aluminum, and titanium, are fluctuating, limiting the growth of raw material suppliers and service providers. Physical vapor deposition coating has an operating cost that includes material, electricity, common gases (such as nitrogen and argon), and periodic maintenance. The material has the highest per-unit cost.

How do Growth Prospects Appear in the Asia Pacific Market?

In 2022, Asia Pacific is expected to account for the largest physical vapor deposition market share, comprising nearly 46% of global market demand. As of 2032, the market is poised to reach US$ 10.3 Billion in value terms.

Due to the fastest growth of PVD end-use industries, the region is expected to exhibit exponential growth during the forecast period. Due to increased applications in solar products, medical equipment, and other fields, China is the leading consumer.

The region is dominant, with many players holding a sizable market share, and few new entrants are expected. It will help to accelerate the region's market growth. India, Japan, and South Korea are experiencing significant growth as a result of rising demand for medical equipment and the expansion of industrial sectors. PVD coatings are among the fastest-growing products due to increased demand for decorative coatings in a variety of industries as well as environmental benefits.

What is the Growth Outlook for Physical Vapor Deposition in Europe?

During the forecast period, the Europe Physical Vapor Deposition Market is expected to grow at a CAGR of 6%. (2022-2032). Europe is also expected to see promising market growth as a result of rising demand for solar panels and government-coordinated policies. The increasing use of PVD in microelectronics applications is expected to boost the region's market position.

Furthermore, the rising demand for long-lasting products with metallic coatings is boosting the PVD market in the region. Europe's market is dominated by countries such as Germany, France, the United Kingdom, Italy, and Spain. Because of economic development and expansion, Central and Eastern European countries are expected to provide growth opportunities in comparison to Western Europe. Medical equipment, solar products, microelectronics, and other applications have the region's largest market share. 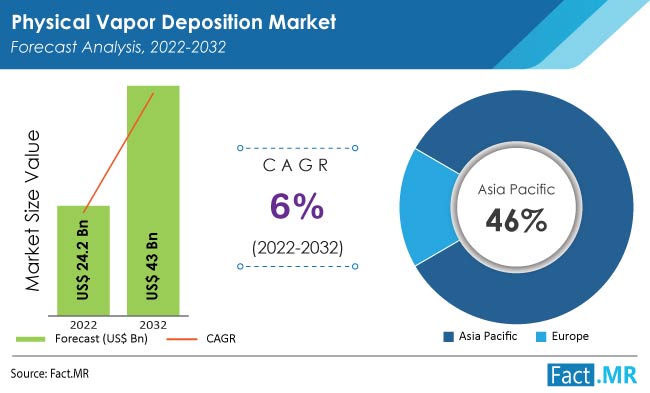 Services Segment to boost Market Demand during the Forecast Period

The PVD services segment is the fastest-growing market. Coating services are used in a variety of industries because they are environmentally friendly and resistant to wear. Companies are constantly conducting research to discover new coating applications and improve product performance. The segment will likely document a 6.3% value CAGR until 2032.

Plasmakote, an Australian start-up, for example, offers ABACO thin-film coatings. It has unique antibacterial properties that prevent bacteria from growing on the deposited surface. As a result, the presence of such innovative products is expected to boost the growth of the services segment during the forecast period.

Several types of medical equipment are produced primarily in the United States, China, Germany, India, Japan, and other developed countries. During the forecast period, such economies are expected to drive the market. A CAGR of 6% is anticipated for the medical equipment segment in forthcoming years.

The market is made up of small, medium, and large businesses all vying for a stronghold. Companies are investing in research and development to create advanced physical vapor deposition solutions to meet the growing demand from a variety of industrial applications. Furthermore, other key players are pursuing organic and inorganic growth strategies that are expected to benefit market growth.

What was the market worth for physical vapor deposition in 2021?

As of 2021, Fact.MR estimated the physical vapor deposition market to have reached US$ 23 Billion.

What is the expected worth of the physical vapor deposition industry in 2022?

By 2022, Fact.MR expected demand for physical vapor deposition to reach US$ 24.2 billion.

At what CAGR did the physical vapor deposition market flourish from 2015-2021?

What is the expected forecast CAGR for physical vapor deposition from 2022-2032?

At what value will the market for physical vapor deposition close in 2032?

By 2032, the market for Physical Vapor Deposition is likely to be valued at US$ 43 billion.

What is the expected market value for the Asia-Pacific physical vapor deposition market?

By 2032, Fact.MR expects the Asia-Pacific market for physical vapor deposition to reach US$ 10.3 Billion

How opportunistic is the Europe market for physical vapor deposition?

Europe is expected to register a 6% CAGR with regard to the physical vapor deposition industry.