The global selective catalytic reduction (SCR) catalyst market is estimated to be valued at US$ 2 billion in 2022 and further expand at a CAGR of 8.6% to reach US$ 4.7 billion by the end of 2032.

Sales of SCR catalysts accounted for 4.3% share of the global catalysts market at the end of 2021.

SCR catalysts are a cost-effective technology and the preferred option among end users due to their effectiveness in reducing NOx emissions from power-generating machineries such as boilers, turbines, furnaces, heaters, and reciprocating engines.

The growing demand for diesel engines and their high prevalence in developed nations has surged the demand for SCR catalysts. The penetration of diesel engines in heavy-duty and light-duty vehicles is growing due to their fuel efficiency aspect.

According to Fact.MR, a market research and competitive intelligence provider, the market for SCR catalysts is projected to surge ahead at 8.6% CAGR between 2022 and 2032. 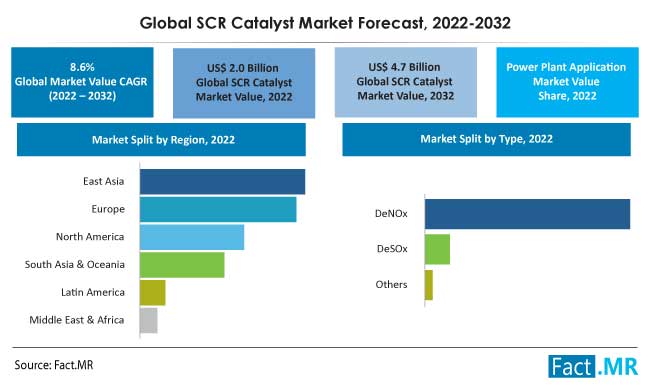 Market share analysis of SCR catalysts based on type and region. Under the type segment, DeNOx dominates with 83.4% market share in 2022.

Why is the World Seeing Rapidly Rising Demand for SCR Catalysts?

Quickly expanding economies are uplifting millions of people and the need for energy continues to rise globally. Lack of conventional energy sources to generate electricity, such as natural gas, oil, and limited nuclear power use, is presenting a profitable expansion opportunity for coal-fired thermal power plants.

There is the substantial deployment of Nox control systems due to stringent nitrogen oxide (Nox) emission regulations in a majority of nations. This is having a favorable effect on the market for SCR catalysts.

The high dependability of Asian economies on coal-fired thermal power plants to fulfil their growing electricity demand is anticipated to boost the market.

The high demand for energy in the region resulted in the sustained growth of productivity. Production in this region is expected to exhibit continued growth in the near future.

Growing demand for DeNOx and DeSOx in petroleum refineries would contribute to the growth of the global market. Also, increasing petroleum demand across the Asia Pacific region will create opportunities for SCR catalyst suppliers. This ultimately leads to a wide adoption base for SCR systems across the region. Increasing production in China will also fuel market growth over the forecast period.

How Can Market Expansion Be Stalled?

An increasing preference for renewable energy sources has renewed attention on solar, wind, biomass, and hydroelectric power sources as traditional power plants come under fire due to safety and environmental concerns. Developing nations are now more committed than ever before to boosting the deployment of renewable energy.

Renewable energy sources are now at the center of the world's energy transformation plans due to technological advancements, relevant laws, and a resolve to combat climate change.

Growing inclination towards clean energy and high carbon emissions from conventional power plants will create some challenges for SCR catalyst manufacturers to accelerate their growth in the global market.

Which Factors Drive High Demand for SCR Catalysts in India and ASEAN Region?

Emerging countries/regions such as India and ASEAN are likely to witness amplification in the overall demand for SCR catalysts in the near future. Increasing awareness of the green environment in emerging countries is expected to drive the market. In India, after the Paris agreement, the country is focusing on reducing environmental pollution from vehicles by imposing emission norms.

The South Asia market is anticipated to expand over the forecast period due to suitable manufacturing facilities, advanced technologies, and the increasing business footprint of key manufacturers in India and ASEAN countries.

A high number of manufacturing companies along with high demand from power plants, automobile plants, and steel plants are some of the prominent factors propelling regional market growth.

Why is China Expected to Be a Highly Profitable Market for SCR Catalyst Manufacturers?

SCR catalyst sales in China are anticipated to grow due to efforts taken by the government to reduce the number of vehicles running on gasoline engines, which will impact the demand for SCR catalysts positively over the long-term period.

Why are DeNOx Types Most Widely Preferred?

DeNOx is extensively utilized in end-use plants due to its high performance, high-temperature corrosion properties, and high emission reduction capability. It is mainly used for the conversion of CO and HC; high conversion rates of HC and CO are realized through the usage of diesel oxidation catalysts and diesel particulate filters. The growing usage of diesel-based engine vehicles in developed regions is one of the prominent reasons driving the market growth of emission control catalysts.

Why is SCR Catalyst Usage Highest in Power Plants?

SCR systems have become the main choice for numerous end-use industries to reduce NOx; hydrocarbons such as ethanol or diesel. Revenue from power plants is projected to expand over the forecast period due to increasing installations of gas turbines, diesel generators, engines, and greenfield establishment of coal power plants across the world. This is attributed to the strong demand for SCR catalysts in power generation plants to reduce the emission of gases.

SCR eliminates nitrogen oxides (NOx) from flue gas that is released by boilers and other combustion sources of power plants. The catalyst is the crucial constituent of SCR systems. It also neutralizes SO and other harmful contaminants that contribute to acid rain.

Manufacturers are expanding their research and development facilities to develop technologically innovative products. Market titans are maintaining a good balance between organic and inorganic growth strategies. Investments and channel partner integration are key to success in this market. Prominent market players are also observed to be involved in sustainability marketing and partnerships.

The global selective catalytic reduction catalyst market is valued at US$ 2 billion in 2022.

Global demand for SCR catalysts is predicted to reach US$ 4.7 billion by 2032.