The global mini LED (light emitting diode) market is set to witness mounting growth in the coming years, as a result of increasing popularity of LED TVs and the emergence of new market opportunities in the Asia Pacific region. The mini LED market is more consolidated in East Asia and South Asia.

Furthermore, increasing adoption of LED screens in the automotive and defense sectors has also opened up new market opportunities for the mini LED market. Introduction of NGN (Next Generation Network) and mounting popularity of IoT (Internet of Things) are expected to boost the demand for smartphones, smart watches, laptops, projectors, and various other smart devices. This rise in demand for smart devices will eventually expand the mini LED market size during the forecast period (2020-2030)

Mini LEDs are gaining popularity in display units such as TVs, smartphones, and many more. Mounting demand for consumer electronic products with better performance and higher efficiency will drive the demand for ultra-high output mini LEDs in the coming years. The market for ultra-high output mini LEDs is poised to account for more than one-third of the total market share by 2030-end. However, the market for standard mini LEDs is expected to remain the most lucrative segment, creating a value opportunity of US$ 490 Mn over the forecast period.

Increasing demand for OLED smart televisions and rising popularity of smart screen products and LED projectors will drive the demand for mini LEDs in the consumer electronics market. Furthermore, ascending demand for smartphones as an aftereffect of advancements in the telecommunication industry and launch of LTE services have catalyzed the growth of the mini LED market in the recent past. 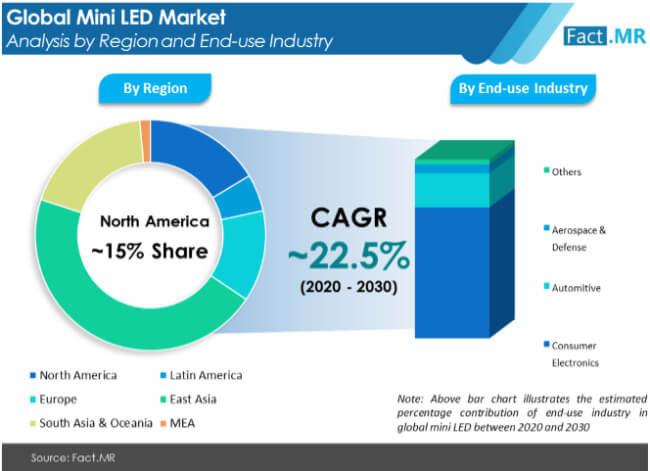 East Asia is seen as the most lucrative region for mini LEDs, backed by strong growth of the semiconductor industry in the region, especially with respect to smart screens with longer lifespan and better efficiency. China and South Korea play an important role in the manufacturing and distribution of mini LEDs, backed by economy of scale strategy with respect to production facilities. In particular, the South Asia mini LED market is poised to expand at a CAGR of 16%, and create an absolute $ opportunity of US$ 130 Mn over the forecast period. This growth is backed by advancements in the consumer electronics industry in the region.

Focus toward innovation and move for digitalization by key players in the mini LED market are allowing them to adopt the capacity expansion strategy by using the economy of scale methodology. Furthermore, key companies such as Epistar are collaborating with end-use industry players such as Apple for providing them with 630 billion mini LEDs to be used in the production of the latest Apple devices.

There is also focus on the expansion of business through increasing sales offices & distribution centers to enhance presence across new and potential geographic clusters. Key manufacturers are observed to be involved in material optimization, manufacturing technological automation, and productivity enhancement. 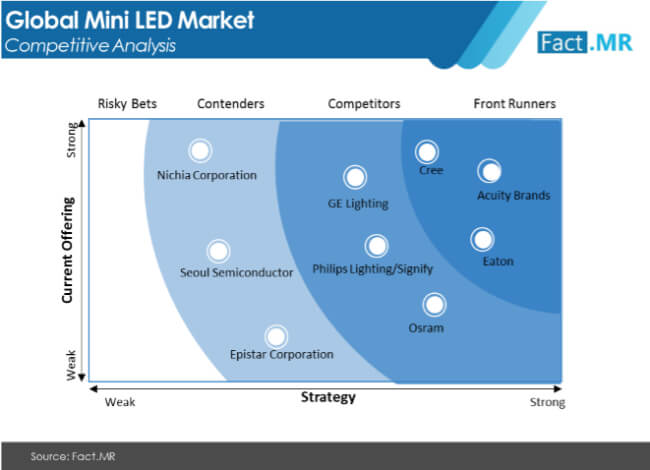 The spread of coronavirus has crippled the entire world. Nearly all countries have imposed lockdowns and strict social distancing measures. This has resulted in the disruption of supply chains. These factors has adversely impacted the demand for mini LEDs significantly during this pandemic period.

North America is one of the most affected regions by the COVID-19 outbreak, which has caused a decline in the demand for consumer electronics, and subsequently, has decreased the demand for mini LEDs. Currently, European countries such as Germany, Italy, and the U.K. are some of the most affected countries, accounting for high death rates. This is negatively affecting market growth in the region, in the short term. It is imperative to note that, these aforementioned regions have experienced a stiff decline in demand for equipment associated with mini LED end-use products.

“The mini LED market will witness strong growth over the coming years, as an aftereffect of mounting smart TV popularity in North America, Europe, and also emerging new markets in the Asia Pacific region”.

Fact.MR has studied the mini LED market with detailed segmentation on the basis of LED type, end-use industry, and key regions.

The mini LED market to expand at an impressive CAGR of 22% through 2030.

The market for standard mini LEDs is expected to remain the most lucrative segment.

*107 figures and 84 tables includes by FactMR