By 2032, the absolute dollar growth of the LED video walls market is expected to be US$ 2.5 Billion. Growing tourism across the globe is expected to be a significant factor in generating the demand for video walls. Also, the mode of the advertisement has changed from conventional methods to digital media.

Also, with the emergence of Out of home advertising (OOH), the demand for LED video walls has increased notably. For instance, in January 2020, a Philips video wall was installed in the cruise ship terminal in Zeebrugge, Belgium. Annually, the port manages more than 150 cruise arrivals and departures.

The growing demand to display various information regarding several demands such as; the arrival and departure of buses, flights, and trains have enhanced the demand for indoor LED video walls. Also, the requirement to display information about several items in auditoriums, shopping malls, and others, is anticipated to strengthen the market for LED Video walls during the assessment period.

According to the analysis, the global LED video walls market is expected to have exhibited a growth rate of 6.8% from 2015 to 2021. On-going technological development and growing integration of video walls are anticipated to have augmented the market growth during the aforementioned time period.

For instance, in January 2020, the newly established Apple store in Stamford was installed with a video wall to increase customers in their stores. The rise in demand for LED walls can be attributed to various advantages offered by LED screens such as; lower operational costs, environmentally friendly, durability, and less carbon footprint. Also, various corporates are adopting LED video displays for advertisement and branding purposes, which is expected to have brought significant revenues to the market from 2015 to 2021.

The forecast period from 2022 to 2032 is anticipated to experience a growth rate of 6.2%. The LED video walls are likely to garner significant traction in the above-mentioned timeframe owing to their ability to offer seamless images, scalability to any shape or size, and excellent optical attributes, which attract the attention of consumers. Moreover, increasing penetration of LED video wall displays in the advertising and media sector is expected to propel market expansion. Also, with the rising number of outdoor events such as; political rallies, sports events, and others are some other salient causes strengthening the market in the forecast period. In addition, there has been a rise in demand for low power consumption electronic equipment with HD quality is also predicted to benefit the market from 2022-to 2032.

Various enterprises are integrating Augmented Intelligence (AI) with LED video walls to offer HD quality visuals and advertisements. There has been an increasing application of LED video walls with AR at bus stops, airports, and railway stations. Besides, various clothing stores are also using interactive screens which allow the users to see the dresses without trying them physically. It has offered a large scope for the future market of LED video walls. Also,

Developments in technologies such as; AI, machine learning, and big-data analytics have offered innovative methods and have boosted the adoption of LED video walls. For instance, various media houses have opted for interactive LED video walls for presenting news forecasts. Similarly, the posters holding banners are being replaced with LED video walls which gives the opportunity for various advertisements against the conventional method of single-board painting.

The transportation sector is expected to be the most significant consumer of LED video walls. LED video walls witness notable demands from airports, bus stops, and railway stations. The growing demand for digital content and information that are relevant to passengers has resulted in ads through a video wall which makes a significant share of development in transportation media revenues.

For instance, Orlando International Airport installed a 700-display video wall that offers cinematic video and updated flight details, check-in, and finding locations through the Automated People Mover (APM) and North Terminal. With the growing shift in consumer choices and behavior, players have been making a strategic investment in their products. This is likely to benefit the market in the coming years.

As per International Air Transport Association (IATA), Air travel in India is expanding at a rapid rate. India has the fastest-growing domestic air travel market in the world. The fast-paced development in airports of the country is likely to generate significant demand for LED video walls, thereby, benefitting the market in the forecast period. 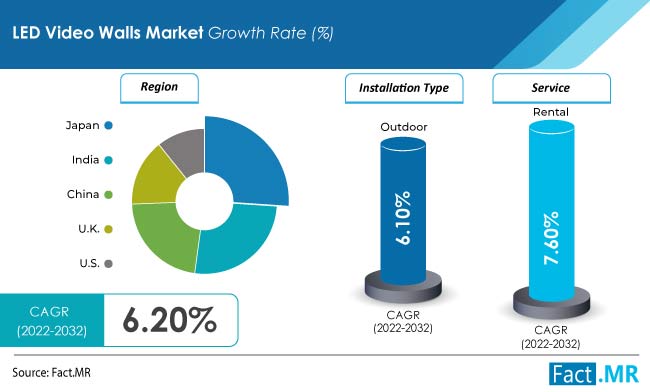 Key challenges observed in the LED video walls market include higher investment costs and financial fluctuations. The cost of other digital signage methods against LED is cheaper, which is likely to hamper the market growth in the forecast period.

Also, the initial charges involved in setting up the LED video wall are also high, which is expected to act as a significant restraint to the market during the assessment period. Moreover, the lack of professionalism and expertise, especially in developing countries, is projected to hamper the market expansion.

However, an increase in investment in interactive displays and R&D in emerging display technology like Micro-LED and quantum dots are anticipated to act as a potential counter to the restraining factors and offer remunerative opportunities to the market in the coming years.

What is the Role of North America in Strengthening the Market in the Forecast Period?

The U.S makes the Most Significant Contribution owing to the Rapid Adoption of Advanced Display Technologies

As per the analysis, the global LED video wall market is likely to be dominated by North America from 2022-to 2032. Among all, the U.S is likely to lead the region in the market. The observations reveal that the U.S is anticipated to garner US$ 1.1 Billion while exhibiting a CAGR of 4.5% from 2022-to 2032. The domination of the country can be attributed to the rapid adoption of advanced display technologies.

Enterprises are adopting various methods to interact with customers with the application of video walls. Players are integrating modern technologies such as; AI, ML, and IoT, which is expected to benefit the regional market in the coming time. Also, with the rising number of smart cities in the U.S, the modern LED video wall display market in the U.S is pegged to have a considerable market growth. Increasing installations in museums, retail stores, stadiums, and transport are likely to benefit the market in the forecast period.

Also, players in the region have been taking various initiatives to strengthen the market. For instance, Primeview, an eminent player producer of visual display technology, launched its Fusion MiniLED. Fusion MiniLED display offers cleaner, brighter images since it is equipped with the maximum refresh rate technology on the market. The product has an innovative cable-free full front serviceability and also possesses a segmental lightweight (15 LB) design. Such advanced developments are expected to positively influence the market in the region.

Why is China Projected to Bethe Fastest-Growing Market?

Rapid Innovation in Developing Markets to Benefit the Chinese Market

As per the analysis, China is anticipated to be the fastest-growing market in the global LED video walls market. The rapid growth of the region can be attributed to the presence of emerging economies with the rapid innovation going on in the market. According to Fact.MR, in APAC, China is anticipated to garner the maximum market revenue, valued at US$ 802.6 Million.

China is projected to be one of the most innovative markets owing to the changes in consumer preferences. Also, there are various untapped markets in the region, which are likely to benefit the market in the assessment period. There has been increasing integration of interactive displays with VR and AR, which is expected to propel market growth in the coming time.

Furthermore, players across the globe are taking initiatives to enhance their reach in China. For instance, in November 2019, Barco NV disclosed its partnership with 6 new partners across APAC. The partnership aims to deliver display technology in the healthcare sector. The partners comprise SigmaJones AV in India, GET Medical in Taiwan, Heytech in Thailand, Cetech in Vietnam, and MedEqual in the Philippines. Owing to such initiatives, the market in the region is likely to offer significant expansion opportunities in the assessment period.

Based on Installation Type, What are the Market Projections?

The growth of the segment can be attributed to the increasing demand for outdoor LED from various sectors such as transportation & logistics, entertainment, etc. Also, the growing usage of businesses to enhance the number of customers through advertisements is projected to augment the market growth in the assessment tenure.

Based on Service, What is the Contribution of the Rental Segment in Driving the Market?

According to Fact.MR, by service, the rental segment is expected to dominate the market in the forecast period. The segment is estimated to experience a CAGR of 7.6% from 2022-to 2032.

The rental services of the LED video wall are likely to gain significant traction in the forecast period. The segment is expected to offer various remunerative opportunities for the players in the coming years.

Players in the market take various initiatives to offer better services and produce innovative products to secure the forefront position in the global LED video walls market. Some of the recent key developments in the market are:

What is the anticipated market value of the Global LED Video Walls Market during the forecast period?

What is the expected CAGR of the Global LED Video Walls Market during the forecast period?

What is the projected market size of the U.S?

What is the projected market value of the Global LED Video Walls Market in 2022?

What is the estimated CAGR of China?

What is the expected market size of India by 2032?

What is the role of the outdoor segment in boosting the Global LED Video Walls Market?

The outdoor segment is anticipated to exhibit a CAGR of 6.1% by 2032

Based on service, what is the contribution of the rental segment in developing the market?

Soil Analysis Technology Market is estimated to surpass a valuation of US$ 1.26 Bn by 2032. Soil fer...