Apart from hydrofluorocarbon, perchloroethylene is largely utilized as a solvent in dry cleaning, metal cleaning, and vapor degreasing applications. As perchloroethylene is more stable than any other chlorinated solvent, it has become the most used dry cleaning chemical. Further, owing to its high boiling point, it is highly preferred for heavy-duty applications that require high temperature to remove contaminants.

China is one of the leading refrigerant manufacturers, due to which, it has created significant demand for perchloroethylene during the historical period, accounting for nearly half of global demand. East Asia has driven consumption and holds a noteworthy perchloroethylene market share on the back of China, and the scenario is projected to continue during the forecast period too.

Growth is attributed to increasing demand for chlorinated solvents in the region, for applications such as hydrofluorocarbon refrigerant production, metal cleaning, and vapor degreasing applications. Due to lack of regularity policies in East Asia, demand for perchloroethylene is poised to expand at a CAGR of 3.6% during the forecast period.

After China, the United States is the second-largest refrigerant manufacturer, accounting for over one-fourth of global production. The country generated huge demand for perchloroethylene in 2019. However, after identification of perchloroethylene’s hazardous effects on humans and the environment, its demand in the United States declined by 0.5% during the historical period. 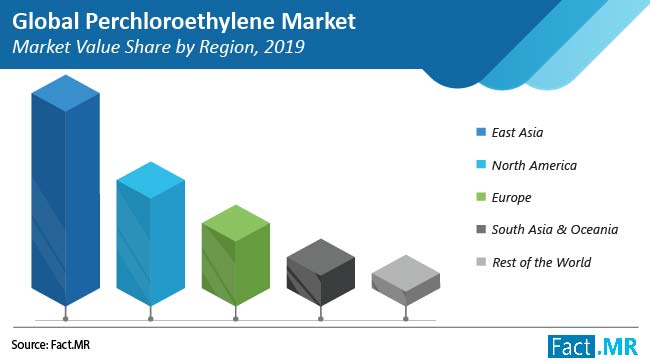 The global perchloroethylene market is highly consolidated in nature where the top players currently account for over half of the sales. Currently, Occidental Chemical, Olin Corporation, and Westlake Chemical Corporation are the key stakeholders in perchloroethylene market. Due to declined demand and increased legalizations, market players have remained conservative during the historical period.

In order to leverage huge demand from developing countries such as China and India, prominent players are offering application-specific products. For instance, Westlake Chemical Corporation offers azeotrope of perchloroethylene that assists vapor degreasers to function as a drying device for metal parts without degradation of the solvent.

Similarly, Occidental Chemical Corporation offers technical grade that is used as a cleaner in applications such as fabric finishes, adhesives, paint removers, etc. Adopting this strategy, prominent companies are trying to create a monopoly in their targeted areas.

The economies of developed countries such as Germany, France, the United Kingdom, and the United States are poised to contract by 8 to 10% in 2020. These countries are the key consumers of perchloroethylene, and are poised to show a decline in growth till the midterm forecast. East Asia is the least affected region and the largest the consumer, a fact that will assist global market growth during the midterm forecast period.

“In the midst of the COVID-19 pandemic, the global perchloroethylene market is poised to suffer a likely loss of US$ 20 Mn by the end of 2020”.

Perchloroethylene Market: About the Report

Fact.MR has segmented the perchloroethylene market on the basis of function, grade, application, and region.

“This Table of Contents prepared is confidential and intended exclusively for the individual or entity with whom it is being shared. Reading, disseminating, distributing, or copying this to any party other than the addressee(s) is unauthorized and prohibited.”

The global market is set to expand at a CAGR of 2% during the forecast period.

*114 figures and 70 tables includes by FactMR