Global calcium silicate boards market valuation is anticipated to increase at a CAGR 3.6% over the forecast period of 2021 to 2031. The market was valued at US$ 1.68 Bn in 2020, which amounted to approx. 20% share of the overall insulation board market, as per the latest study by Fact.MR, a market research and competitive intelligence provider.

Growth of the calcium silicate boards market is attributed to surge in insulation requirements from industries such as petrochemicals and chemicals, which capture the requisite demand of nearly 25% of the market.

Apart from their application in petrochemicals and chemical industry, steel & glass industries also have a prime impact on market growth, owing to rise in consciousness towards energy conservation across the globe.

These aforementioned factors are set to provide impetus to calcium silicate insulation board consumption in the medium- and long-run forecast period.

Calcium silicate boards can be drilled and machined through various processes. Due to their exceptional properties, these non-asbestos boards are among the most prominent materials used in construction activities.

The market has evolved significantly in recent years on the back of increasing investments in new technologies to overcome performance and quality issues associated with manufacturing. Leading manufacturers are focusing on testing in-depth new technologies and launching of products in the target market, thereby capitalizing on the burgeoning demand.

Moreover, increased adoption of large-size calcium silicate boards has resulted in a rise in overall demand across diverse end-use industries. Based on the aforementioned factors, the market is anticipated to expand at a CAGR of 3.6% through 2031.

Below points summarize the market over the long-run forecast period:

What are the Prominent Driving Factors for the Demand for Calcium Silicate Boards?

There is significant consumption of calcium silicate boards in petrochemical and steel industries, especially from pipe section, equipment insulation, and refractories. Escalating demand can be attributed to rise in manufacturer consciousness to reduce overall production costs across energy-intensive industries. 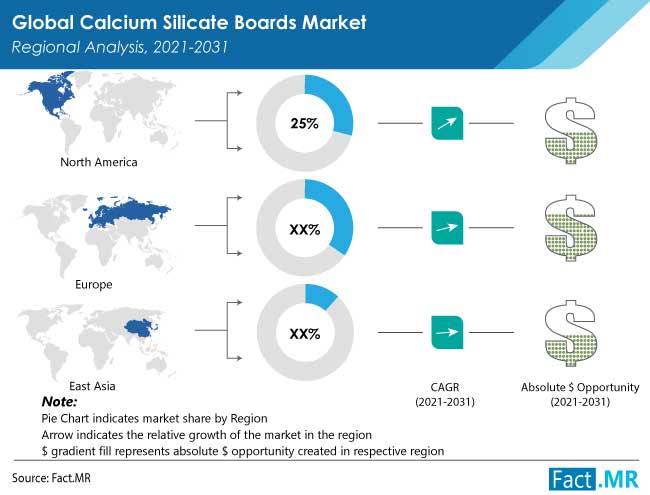 Why is China a Prominent Market for Calcium Silicate Boards?

China is the world's largest construction market. Growing disposable income along with supportive government policies regarding residential, commercial, and industrial construction are some of the factors responsible for extensive growth of the construction industry in the country.

Not only construction but the country is also the largest steel producer. A huge amount of steel is produced and consumed in China. Owing to the extensive construction and steel industry and its continuous growth, demand for calcium silicate boards in China is always high.

Why is the Calcium Silicate Boards Market in France Anticipated to Grow at a Much Faster Rate than the Global Average?

VINCI and Bouygues are among the largest construction companies located in France with a net worth of over US$ 55.6 Bn and US$ 41.14 Bn, respectively.

The country is one the largest contributors to global calcium silicate board consumption due to the vast construction industry. Over the period of 2016-2020, the market in France expanded at a CAGR of 3.8%, and is anticipated to rise at a CAGR of 4.7% over the forecast period.

Additionally, growing petrochemical, steel, and furnace industry is also anticipated to drive the requirement for calcium silicate boards in France. Owing to the aforementioned factors, France is anticipated to remain one of the vital contributors to the development of the global market.

How are Different Sizes of Calcium Silicate Boards Penetrating the Market?

It is available in various widths, ranging from 50 – 100 mm as per custom requirements generated by end-use industries. The density range of the product varies from 150-200 Kg/m3. The board’s density plays a major role in deciding its end use. Lower density boards are utilized for industrial applications, while medium- and high-density board applications can largely be observed in building and construction applications.

Followed by 1000 X 500 mm, 1200 x 2500 mm calcium silicate boards capture 1/3 of global demand. 40% of 1200 X 2500 mm boards are utilized for industrial purposes, while the rest are utilized for building and construction applications such as chimneys, fireplace linings, and others.

Historically consumption of calcium silicate fiber boards in piping section application increased at a CAGR of 2.3%, and is anticipated to rise at a CAGR of 3.2% over the forecast period. 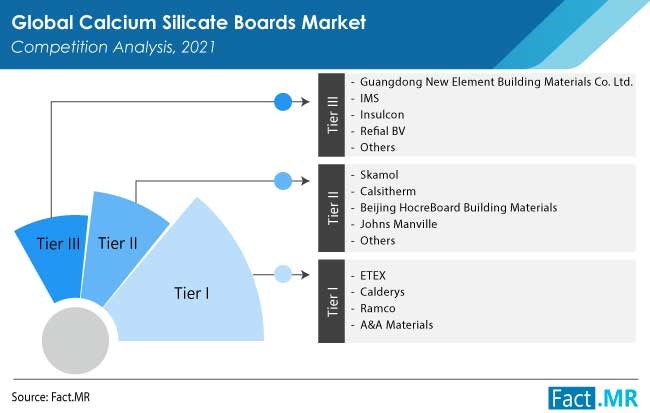 Key players of calcium silicate boards are focusing on increasing their market share in the Asia Pacific and European markets by entering into strategic partnerships and joint ventures with regional players as well as investment groups.

On the other hand, regional market players are focusing on forming long-term relationships with direct application players to sustain continuous revenue flow. In addition, global and domestic manufacturers are focusing on adopting alternative distribution channels, such as online channels, to strengthen their market presence.

What was the value of the market for calcium silicate boards in 2020?

In 2020, the calcium silicate boards market surpassed a valuation of US$ 1.68 Bn.

What are the sales projections for calcium silicate boards?

What are the latest trends of calcium silicate boards in 2021?

What is the main reason driving the sales of calcium silicate boards?

Rapid growth in the building and construction industry is the prime reason driving the sales of calcium silicate boards.

How much market share is enjoyed by tier-1 suppliers of calcium silicate boards?

Which countries are key demand generators of calcium silicate boards?

What do insights for the North America market for calcium silicate boards market reveal?

North America accounted for nearly 18% of global calcium silicate board demand in 2020.

What is the anticipated growth rate for the European market during 2021-31?

The European market for calcium silicate boards is projected to expand at a CAGR of 4.3% over 2021 – 2031 and hold approx. 40% of global demand share.