Many inorganic substrates, such as synthetic fibres, pigments, fillers, metal, ceramics, and glass, bond well to the resulting silicic acid. Ethyl polysilicate, with its highly intense coagulation and hardening properties, has found a niche in dentistry as an impression material.

Government initiatives such as new healthcare schemes and universal education have created a demand for the construction of new public infrastructure such as schools and hospitals, which will drive industry growth. The product is used in concrete and cement processing because of its ability to remove air pores and vapors from concrete blocks, which is expected to drive the ethyl polysilicate industry size in the estimated timeframe.

Ethyl polysilicate market share from silica synthesis increased by more than 3.6% over the historical period. The product is widely used as an adhesive, binder, and sealant in end-use industries such as oil and gas and metallurgy to protect oil wells, refineries, and metallic surfaces from water contaminants. These chemicals protect wells from hydrolysis, preserving crude oil quality and yield and propelling industry growth.

Cross-Linking Agent to fuel market growth over the Forecast Period

The crosslinking agent segment is expected to account for one-third of demand by 2032, with a CAGR of 3% between 2022 and 2032. Because of its low VOC emissions and environmental friendliness, ethyl polysilicate is increasingly being used as a crosslinking agent in cold-curing silicone rubber systems.

Because of its high-temperature resistance, ethyl polysilicate is widely used as a crosslinking agent in industrial coating applications such as steel structures, concrete blocks, and others. Furthermore, increased awareness of the benefits of cross-linking agents has resulted in increased demand in Asia-Pacific, as infrastructure activities in the electronics, transportation, energy, automotive, and industrial sectors soar.

By 2022, the ethyl polysilicate for ceramics is expected to exceed US$ 170 Million. This chemical product, along with a liquid catalyst, is used in ceramic molding processing to keep the slurry composition stable.

The product binds ceramic particles by removing voids and air pores that can damage ceramic material, as well as providing extra mechanical stability and durability, which may fuel the ethyl polysilicate market in the near future.

These credits are expanding their use in the paint and coatings, synthetic, oil and gas, metal, material, drugs, and optical industries. The ethyl polysilicate market is frequently used as a folio in paints, gels, and emulsions in the paint and covering industry, which gives high glue quality and maintains the solidity of paints.

When used as binders and cross-linking agents, ethyl polysilicate typically emits VOCs (volatile organic compounds), which produce an unpleasant and strong odor that is harmful to both humans and the environment.

The World Painting and Coating Industry Association (WPA), which has members from Brazil, the United States, Mexico, the United Kingdom, the European Union, India, China, Canada, France, Japan, and Germany, monitors and develops guidelines to reduce hazardous waste released and formed in the decorative paints industry.

Manufacturers are focusing on introducing lower VOC ethyl polysilicates and utilizing it as a revenue generation opportunity in order to comply with regulations from various government and non-government organizations.

What is the Growth Outlook for Ethyl Polysilicate in the Asia Pacific?

This expansion is primarily due to the increased use of crosslinking agents in industrial hubs. The Asia Pacific is expected to grow significantly over the forecast period, representing a high potential opportunity for industry participants.

The APAC market is expected to grow at a 5% CAGR, owing primarily to increased infrastructure activities in the automotive and industrial sectors in countries such as India and China. Over the forecast period, significant growth is expected in the Middle East and the Asia Pacific markets, as countries in these regions focus on infrastructure modernization.

How do Growth Prospects Appear in the Europe Market?

A significant increase in the region's chemical industry as a result of ongoing chemical research may fuel product demand.

This product is used in the chemical industry as a reagent for the organic synthesis of products and as a dehydrating agent in chemical laboratories, which may boost the market for ethyl polysilicates. The European sector's progress will be fueled by the region's expanding chemical market, which is expected to grow at a CAGR of nearly 4% by 2032. 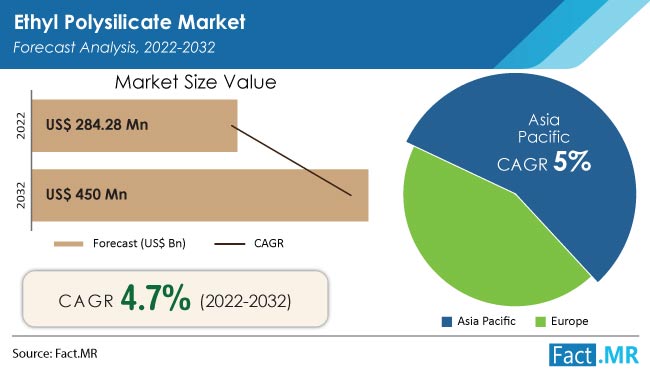 By 2032, the Global Ethyl Polysilicate 40 Market is expected to exceed $320 Million

It is widely used as a binder in paints, emulsions, gels, and cement slurry due to its fast drying rate, which is advantageous in harsh environmental conditions. It contains 40% silica by weight and has high adhesive strength, allowing paints and emulsions to last for a longer period of time. It also protects walls from heat and thermal degradation, which is expected to drive the ethyl polysilicate market by 2032.

The paint and coatings industry is expected to grow by more than 5% through 2032. It is widely used in paint and coating processing due to its ability to reduce drying time, heat, corrosion, and water resistance.

It is also used to increase the hardness of varnish coating on glass and highly polymerized surfaces, which may drive the ethyl polysilicate market demand over the forecast period.

What is the expected forecast CAGR for Ethyl Polysilicate from 2022-2032?

At what value will the market for Ethyl Polysilicate close in 2032?

By 2032, the market for Ethyl Polysilicate is likely to be valued at US$ 450 Million

How opportunistic is the APAC market for Ethyl Polysilicate?

By type, which category is likely to remain prominent until 2032?

Polysilicate 40 will remain most prominent users, expanding at CAGR of 4.3% until 2032.