Increasing demand for electricity owing to rising energy demand from the growing population across the world is anticipated to drive the shipments of disc insulators as they are crucial in electricity generation and supply components.

Insulators are crucial components in electricity generation and distribution which makes the components of high demand in this digital world thriving on electricity. Increasing digitization across the world is driving the demand for electricity on a global scale and this is expected to favor disc insulator sales over the years to come.

Rising sales of consumer electronics, growing use of renewable energy resources, and advancements in technology are expected to be key factors that drive disc insulator demand throughout the forecast period. Ceramic insulators and polymer insulators are expected to witness an increase in demand over the coming years.

However, defects in disc insulators and lack of efficiency are expected to have a hampering effect on the overall disc insulators market growth through 2032. The inability of disc insulators to withstand voltage dips and efficiently prevent flashovers is also another factor that adversely affects disc insulator sales. 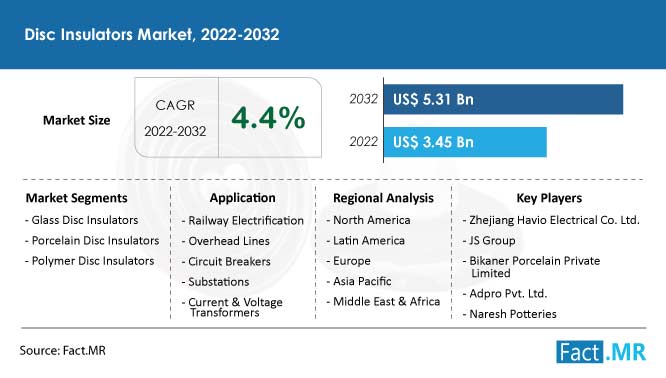 Why is Demand for Disc Insulators Rising Steadily?

“Increasing Use of Renewable Resources to Generate Electricity”

Demand for energy has increased exponentially as the population of the world has risen substantially. In order to meet this high demand, there has been an increase in the deployment of renewable resources for electricity generation. Increasing focus on sustainability and a quest to reduce pollution are other factors that promote the use of renewable energy resources for electricity generation.

The establishment of new power generation plants and distribution infrastructure for this increased demand for electricity is expected to drive sales of components such as silicon insulators, plug insulators, strain insulators, etc. 11kv disc insulators are also expected to be highly popular over the coming years.

Defects have been a major challenge for disc insulator manufacturers over the past years and this trend is expected to be rife across the forecast period as well. These defects cause leakage of current and hence decrease the overall efficiency which is an undesirable aspect that restrains its adoption.

Inability to withstand voltage dips and flashovers is also a factor that is expected to have a negative impact on the overall disc insulators market potential.

How are New Industry Entrants Faring in the Disc Insulators Industry?

“Start-up Companies Can Develop Innovative Technologies to Disrupt the Market”

New market entrants could develop similar innovative solutions that help overcome the challenges faced by insulation manufacturers and electricity providers. Incoming market players can also focus on exploring the possibilities of the application of nanotechnology in disc insulators to overcome their shortfalls.

Which Regions Should Disc Insulator Manufacturers Bet their Investments On?

The rapidly increasing population in the Asia Pacific region has resulted in high demand for energy and this is a prime factor that is anticipated to drive sales of disc insulators in this region over the forecast period.

The North America disc insulators market currently stands at a value of US$ 850.2 million and accounts for a notable market share of 24.6%. Increasing focus on the use of renewable energy resources to generate electricity and high consumption of electricity by consumers in this region are major factors that drive disc insulators market growth in this region through 2032.

Meanwhile, the Europe disc insulators market accounts for a total valuation of US$ 791.4 million and a market share of 22.9% in 2022.

Disc insulator manufacturers are expected to focus on overcoming the shortfalls of current products by increasing their investments in research and development to create novel offerings.

In 2022, the global disc insulators market accounts for a US$ 3.45 billion value.

Sales of disc insulators are anticipated to rise at 4.4% CAGR through 2032.

The North America disc insulators market is valued at US$ 850.2 million.