In 2023, the global drone accessories market is estimated to be valued around US$ 20,659 million, while the drone market is projected to grow at 20.7% CAGR. Drone propellers is one of the important part of the drone and the revenue generation from the sales of drone propellers accounted for nearly 4.2% share of the global drone accessories market at the end of 2022.

Devices that convert rotational motion into linear thrust are known as propellers. By rotating an airflow that creates a pressure difference between the upper and lower surfaces of the propeller, drone propellers give the aircraft lift. This causes a mass of air to accelerate in one direction, resulting in lift that resists gravity.

In order to maintain balance, the propellers of multi-engine drones like octocopter, hexacopter, and quadcopter are arranged in pairs and rotate either clockwise or counter-clockwise. The yaw, elevation, descent, or yaw, pitch, and roll of the drone will be affected by changing the speed of these propellers.

Increased drone use has made it possible for nations all over the world to create legislation that are advantageous to drone equipment. Due to end consumers' increased use of drones, the drone industry as a whole is gaining momentum in several parts of the world. Drone propellers and other accessories sales have increased as a result of this.

From 2018 to 2022, the global market for drone propellers registered a CAGR of 15.4%. Fact.MR, a market research and competitive intelligence provider, reveals that the market will exhibit growth at 17.6% CAGR between 2023 and 2033. 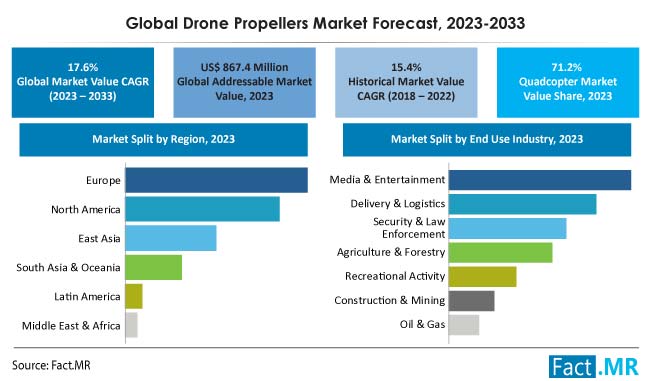 Government agencies are the first customers of drones, which also paves the way for drone accessories market such as drone motors, propellers, drone, drone batteries, etc. The corporate drone segment is the fastest growing segment in the entire drone industry. This segment includes drone software, hardware, services and accessories for industrial and commercial applications.

Agriculture, building inspection and construction are the top three segments for commercial drones. Therefore, these segments contribute significantly to drone accessories revenue. However, security and law enforcement agencies will continue to be the largest customers of drones and drone accessories. Technological advances and government-funded research and development are creating more powerful commercial drone technology that could accelerate adoption in other areas.

Favorable government regulations on contactless delivery amid COVID-19 are boosting the drone delivery industry. Regulators in Australia, China and the UK have less stringent regulations governing nascent delivery drone operations, and the US still has a significant influence over global aviation regulation.

Due to certain advantages, long-term global regulation of drone delivery and logistics transport is likely to follow the US framework which has accelerated government approvals for drone delivery services around the world. This led to increased sales of drone and its other accessories including the propellers. The drone propellers market due to delivery and logistics will obtain a market size of US$ 175.0 million in 2023.

What Do Drone Propellers Manufacturers Need to Watch Out for?

The growing protectionist and national security abuses by governments that threaten the established trade rules that have allowed global growth to soar for the past seven decades can no longer be assured.

Drones include a wide range of products and are used in various end-use sectors such as delivery, oil and gas, construction, logistics, etc. It requires strict standards depending on the end use.

A drone system is an inherently complex technology. It requires many different components that must be integrated with extreme precision and accuracy using the latest technology. All of these things add to the price of a small drone. Drones are highly regulated and must meet strict operational standards, including certification and regular legal updates.

How U.S. Drone Industry to Support the Growth of Drone Propellers Market?

Several investments are made in recent years in the development of drones in the U.S. As a result of this, the drone propellers demand in the country will be at the frontal seat in the future. The country is largely profitable in terms of drone operations. Drone accessories which include the propellers are equipped with advanced technology, which allows for ease of operation and increased operability.

Adding drone spending in the U. S. corresponds with the migration of artificial intelligence (AI) and robotics from Silicon Valley into the defense sector. The Department of Defense (DoD) of the United States has always been the primary client of drones and thereby drone propellers.

The U.S defense spending in 2020 was around 39% of the total drone market. The growing drone market in the country will provide several opportunities and the drone propellers market will grow at a CAGR of 14.6% during the forecast period.

How the Government Support to Drive Drone Market in India?

India is gradually moving towards increasing the usage of drones and drone accessories with the help of favorable government regulations. The ever-increasing terrorist and insurgency activities increase the demand for defense and security systems across India.

Additionally, government support for private research institutes, favorable government policies, and increasing corporate spending on research and development is helping to catalyze the demand for drone deliveries in India. India's share of military spending was US$ 71 billion in 2019, which was around 4% of global military spending.

How Construction Industry Will Lead to Market Growth?

The architecture, engineering, and construction (AEC) sector will remain one of the most important sectors for the global drone market through 2032. The construction industry has a reputation for schedule and budget inefficiencies. Large projects typically take 20% longer to complete than scheduled and budgets may increase by up to 80%. Drones are improving the efficiency of construction operations by transforming how construction firms survey land, monitor progress, and mitigate safety risks.

The construction and infrastructure industries have witnessed widespread use of drones, especially in the critical infrastructure segment of the market. Based on FactMR analysis, the construction & mining industry is expected to reach US$ 54.0 million in 2023. It is poised to grow at a healthy CAGR throughout the forecast period as it will capture a market share of 6.2% in 2023.

The market has shown a strong growth potential in the Chinese, Indian, American and Indonesian markets, as they account for 58.3% of global growth in this sector.

Drones become more effective due to the increased speed, power, drift, and sink time of myriad rotors or propellers. Octocopters are ideal for long-term aerial activities due to their high ability to carry and operate additional equipment to obtain better visual data.

The availability of rapidly assembled components with higher lifting capacities and various commercial and military applications contributes to the expansion of octocopter sales. Octocopter will account for a market share of 10.2% in 2023.

The octocopter's drone propellers operate independently, adjusting relative velocity to produce the thrust and torque needed to lift the drone. In this configuration, if one of the propellers fails, the remaining propellers will maintain stability while hovering in the air.

Top drone propeller producers are putting a lot of effort into developing products that are innovative in order to address different requirements and concerns related to drone technology.

In the drone propellers market, major players employ a competitive price strategy. To increase business, and revenues, companies are forming alliances and collaborating with end-use sectors and governments.

The market is likely to reach a valuation of US$ 4,388.2 million by the end of forecast period.

The hexacopter drone sub-segment is likely to reach a valuation of around US$ 161.3 million in 2023.

Media & entertainment type of end use industry sector will hold the highest market share of 25.0% in 2023.

Europe region holds the leading market share of around 36.4% in 2023 and presumed to increase in same growth curve by the end of 2033.