The projected Y-o-Y growth rate for 2021-2022 is 25.7%. The convergence of technology such as AI, ML, and connectivity is escalating growth across all spheres. Rising deployment of 5G and increased electronic content in automotive, EVs, and AVs, and the expansion of IoT equipment in smart homes are the emerging trends of the global IoT sensors market.

Increasing demand for integration of Industrial IoT (IIoT) in sectors that demand sensor-based measurements for observations and decision support purposes to projected to drive the expansion of the IoT sensors market in the forecast period. Based on region, North America is expected to dominate the market in the forecast period. The U.S alone is anticipated to garner a revenue of US$ 33.8 Billion by 2032. The U.S is expected to emerge as the strongest player across the globe. This can be attributed to the presence of eminent players such as Honeywell. Besides, other cities like San Francisco pioneered smart parking systems that assist drivers to find parking among 8200 parking spots installed with sensors.

Further, Chicago has installed a various array of sensors to detect and respond to floods, or traffic. Moreover, New York, Chicago, and San Francisco are some of the cities in the U.S to embed sensor nodes into light poles for the urban environment, regulate air quality in congested areas, and institute predictive analytics. Owing to such factors, the market in North America is likely to flourish in the coming years.

With increasing Smart City initiatives, the development of field devices, robots, sensors, and the advent of Industry 4.0, the market is anticipated to have fortified its expansion. As per the latest report by Fact.MR, the industry exhibited a growth rate of 23.9% from 2015-to 2021. Unfolding modern applications and business models, along with inexpensive device costs, have played a salient role in driving the market for IoT sensors during the prior mentioned timespan. As a result, various connected equipment such as; connected cars, machines, consumer electronics, and meters, among others started flourishing in the market.

Industry 4.0 initiatives across regions such as; China, and Europe, are the key drivers of the IoT implementation, thus, benefitting the market in the forecast period. As per Accenture, 60% of the manufacturing organizations are already involved in IoT projects, and more than 30% are at a nascent stage. Also, the reduced cost of IoT sensors is one of the salient causes that are likely to fuel the market in the future.

With the increasing adoption of microelectromechanical systems (MEMS) technology and fast reduction in the sensor size, sensors are witnessing significant demand in automotive, consumer products, and healthcare. According to Fact.MR, the global IoT sensors market is anticipated to exhibit a CAGR of 20.3% during the forecast period from 2022 to 2032. Over the last 5 years, smaller sensors have been implemented in devices such as; drones, smartphones, robots, and wearables, thereby, bolstering the market size significantly. 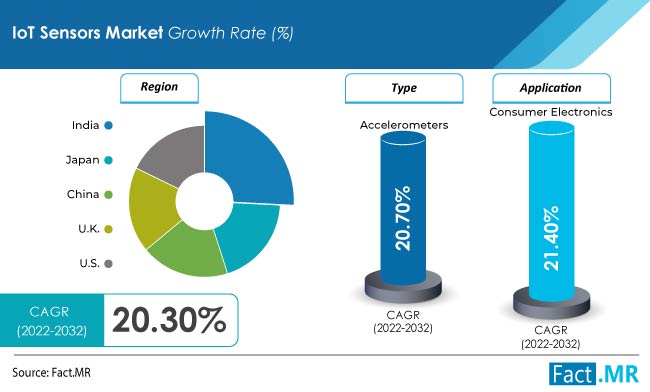 As per NASDAQ, by 2030, driverless cars are likely to fetch dominance in the market. Besides, DHL SmartTrucking is focusing to construct a fleet of 10,000 IoT-enabled trucks by 2028. Players such as; Volkswagen, Mercedes-Benz, Toyota, Google Inc., and Volvo are making aggressive investments to develop smart cars with fine specifics that provide safer and more comfortable driving experiences. IoT has introduced a massive revolution in the transportation and automotive sector. With real-time data access, preventative maintenance, and connected mobility, the IoT market is flourishing significantly.

With the emergence of smart cities, Car2Car connectivity and modern fleet management are likely to enter the market, thereby, offering significant opportunities to the IoT sensors. This has resulted in fast innovation and the adoption of smart sensor technology, increasing the demand for IoT sensors. The automotive sector across the globe is transforming into an autonomous phase with recent business collaborations and joint ventures among system integrators, chip makers, automotive giants, and others.

With increasing urbanization and population, various countries across the world are implementing the Smart City projects. Connected devices such as; smart lights, sensors, smart meters, and others, are assisting in enhancing functions and efficiency of infrastructure and other services. The increasing number of smart homes, smart infrastructures, smart manufacturing, and Industry 4.0 projects are likely to transform the business arrangement, thereby, bolstering the industry growth.

As per the White & Case LLP Report 2021, Saudi Arabia is in the process to construct four smart cities, the Red Sea Project, NEOM, Qiddiya, and Amaala. Resources reveal that the most significant development among all is NEOM, which is US$ 500 Billion megacities that would include a zero-carbon hyper-connected city.

Furthermore, there has been significant growth in the adoption of smart grids, smart air quality controllers, smart waste management, and smart grids. This is projected to play a significant role in driving the global IoT sensors market in the forecast period. Also, with rising acquisitions amongst players in the market, the industry is projected to grow significantly. For instance, in April 2022, Antin Infrastructure Partners announced that it had inked an agreement to acquire a majority stake in SNRG. SNRG is an owner-operator of fully integrated smart grid systems for industrial and residential customers. The acquisition was part of Anti’s NextGen strategy, which was disclosed in 2021.

Despite the huge potential and benefits offered by IoT devices, there are severe concerns associated with data privacy. IoT-enabled devices and sensors generate a massive volume of data each second. As IoT connects various devices, it offers more opportunities for entry points for malware. The intervention of privacy may occur as a result of the growing dependency on connected devices, reflecting the vulnerability of connected equipment.

Various players in the industry are developing solutions. However, owing to the market’s ecosystem and complexities, 100% data security is not been offered. In April 2022, Trend Micro Incorporated announced the launch of Trend Micro One, a new unified cybersecurity management platform. The cloud-based solution collects more than 250 billion data signals across the users’ environment. It uses native sensors across a wide array of technology such as; Bit Discovery, Google Cloud, Slack, Tenable, and Rapid7 among others.

In December 2020, the U.S introduced cybersecurity regulations to protect all vulnerable devices from hackers. The IoT Cybersecurity Improvement Act 2020 is expected to provide security against undesirable security breaches by hackers. The market is likely to see limitations in the forecast period, however, with increasing favorable initiatives by the government and the launch of new software/products, the market is expected to witness positive results in the coming years.

Why is Demand for IoT Growing across the U.S?

As per the analysis, the market in North America is expected to lead the global market for IoT sensors. In the region, the U.S is projected to be the most lucrative region during the forecast period, garnering US$ 33.8 Billion, while expanding at a CAGR of 20.9% from 2022-to 2032.

The growth of the region can be attributed to the presence of established players such as; Honeywell, Verizon, Microsoft Corporation, and Google, among others. Players are making massive investments in strengthening their IoT infrastructure. For instance, in 2019, Honeywell launched a new industrial IoT analytics platform known as Honeywell Forge that would collect operational data, optimize, and analyze it. In another instance, in November 2020, Honeywell and Nozomi Networks announced a cybersecurity partnership to offer more comprehensive, end-to-end cybersecurity for Operational Technology (OT) environments. Owing to such initiatives by eminent players in the region, the market in the U.S is likely to expand manifold in the coming years.

Also, with increasing demand for advanced IoT sensor solutions across various industry verticals, the market is likely to augment in the forecast period. In order to meet such demands, players focus on offering unique and innovative solutions, thereby, making the market more remunerative. For instance, Google offers Cloud IoT Core. It is helpful when there are thousands of connected devices to the internet and there is a need for a highly scalable and manageable service. With such factors, the market in the U.S is anticipated to flourish and make fetch massive revenues in the coming time.

Why is APAC Expected to Expand at the Highest CAGR during the Assessment Tenure?

Demand for IoT devices and sensors has surged rapidly in major developing economies such as; India, China, Japan, and others. As per the observations by Fact.MR, India is projected at the highest growth rate of 30.3% during the forecast period. China and Japan are estimated at 22.2% and 22.6% respectively.

Expansion of IoT adoption in India is backed by increasing internet penetration, strong connectivity, growing Smart City projects, and new business models, among others. With increasing efforts by the government of India to make the nation smart and developed, IoT has ample remunerative opportunities.

For instance, in April 2022, Coimbatore City Municipal Corporation (CCMC) launched a smart 24*7 water supply project at Cheran Nagar in Kavundampalayam, Tamil Nadu. With such favorable initiatives, the market in the country is expected to witness rapid growth during the forecast period.

Similarly, the launch of Gujarat International Finance Tec-City (GIFT) has garnered international attention, which is an under-construction central business district in Ahmedabad, Gujarat. The initiative will be a major boost to India’s Smart-City mission by burgeoning finance and technology sectors.

Also, with the principal customers in the city such as; Oracle, Cybage, BSE, NSE, MCX, Bank of America, and STT, the project is likely to experience numerous opportunities in the forthcoming years. Owing to the aforementioned factors, the market in India is likely to procure significant traction across the globe, thereby, benefitting the APAC region and as well as the nation itself.

Based on Type, how is the Accelerometers Segment Driving the Global IoT Sensors Market?

According to Fact.MR, the accelerometers segment, is expected to dominate the market during the forecast period. The segment is predicted to exhibit a CAGR of 20.7% from 2022-to 2032.

Growth of the segment can be attributed to various benefits such as; high impedance, offers higher sensitivity, and using an in-built signal conditioning circuit to measure capacitance.

Various developed nations such as; Singapore, Australia, and Malaysia are projected to be lucrative markets for IoT sensor solutions owing to the increasing deployment of IoT sensors such as accelerometers.

What is the Contribution of Consumer Electronics in Developing the Global IoT Sensors Market?

Expansion of the segment can be attributed to the innovation of new products and the strong position of key market players across the globe.

Key players in the global IoT sensors market are focusing on product development and carrying out various advanced research and development programs. Enterprises are making several efforts to collaborate with various technology providers to give innovative results. Recent key developments among players are:

What is the expected market value of the Global IoT Sensors Market from 2022-to 2032?

What is the anticipated market size of the U.S?

What is the contribution of the accelerometer segment in propelling the Global IoT Sensors Market?

Based on type, the accelerometer segment is likely to expand at 20.7% CAGR by 2032

India is likely to exhibit a CAGR of 30.3% during the forecast period

What is the projected market size of China?

At what CAGR is the U.K anticipated?

What is the estimated market size of the Global IoT Sensors in 2022?

The global IoT sensors market is expected to procure US$ 27.4 Billion in 2022

What is the market value of Japan during the forecast period?

Gas sensors market to experience a stable demand in 2021. Machines such as oxygen monitors and analy...

The global marine sensors market is estimated at USD 21.9 Billion in 2022 and is forecast to surpass...