The global n-propyl bromide market is poised to embark on a positive growth trajectory, registering a CAGR of 2% across the forecast period (2020-2030). Growth is attributed to its increased demand as a replacement for trichloroethylene and perchloroethylene. Stringent regulations levied on trichloroethylene and perchloroethylene have forced consumers to move towards more sustainable alternatives. Exceptional cleaning offered by n-propyl bromide and also due to its less toxic nature, it has emerged as an ideal replacement for conventional solvent chemicals.

Increasing demand for precision cleaning from applications such as medical implant equipment, artificial joints, aerospace components, and electronics has driven the demand for n-propyl bromide during the historical period (2015-2019). Owing to its high solvency and strong cleaning capabilities, metal cleaning and vapor degreasing applications have become primary consumers of n-propyl bromide. As a result, the metal cleaning and vapor degreasing application segment accounted for over one-third of global consumption in 2019

Efficacy to act as an intermediate, n-propyl bromide has become a key ingredient in the production of insecticides, quaternary ammonium compounds, and flavors and fragrances. The pharmaceuticals sector is identified as one of the largest consumers in the global n-propyl bromide market, and generated a market value of over US$ 9 Mn in 2019. Apart from these aforementioned applications, agrochemicals and electronics are set to result in additional demand for n-propyl bromide during the forecast period. N-propyl bromide is low priced as compared to its alternate cleaning solvents such as Novec and Vertrel, which will remain one of the key driving factors of this market. 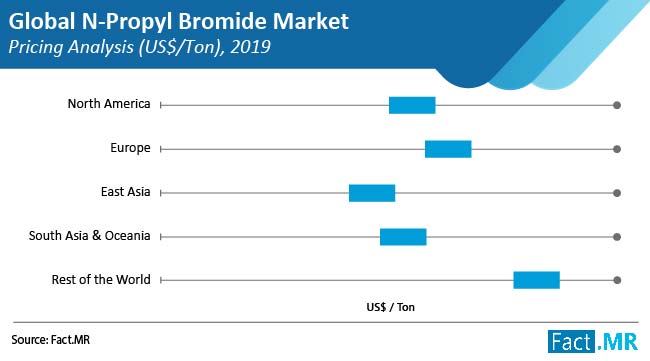 China is the largest semiconductor manufacturer across the globe, due to which, it has driven the consumption of n-propyl bromide for precision cleaning applications during the historical period. This scenario was further assisted by its increased usage as an intermediate in drug production and in the production of agrochemicals.

On the back of China, East Asia is projected to lead the global n-propyl bromide market share, accounting for over one-third of global consumption by 2030. Owing to increasing demand for n-propyl bromide from metal cleaning & vapor degreasing applications, the East Asia market is poised to expand at a CAGR of 2.5% during the forecast period.

On the other hand, the European Chemicals Agency (ECHA) has classified n-propyl bromide as toxic for reproduction, pointing out its adverse effects on sexual functioning with fertility, which will hinder its consumption in European regions. 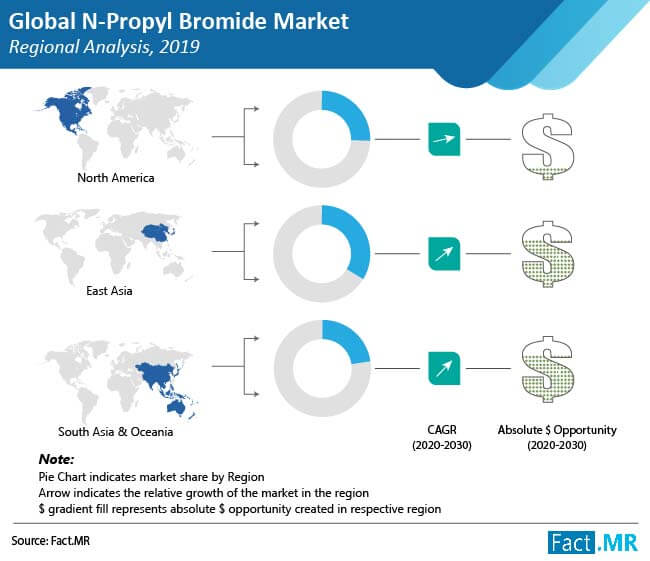 The global n-propyl bromide market is highly consolidated in nature, where the top three players currently account for near half of global production. Albemarle, Shouguang fukang pharmaceutical co. Ltd., and Solaris Chemtech are key stakeholders in the n-propyl bromide market. Players have remained conservative in the market owing to numerous legalizations implemented by various regulatory bodies, such as EPA and ECHA.

The coronavirus outbreak has forced people to stay under lockdowns in their homes, which has affected production and demand across the globe. Fear of the COVID-19 outbreak has forced countries to halt any kind of import-export across borders. Sudden industrial and transportation shutdowns have hampered the global economy in the last few months. As per WHO and UN stats, loss caused due to the coronavirus outbreak may take years to recover. The coronavirus pandemic has affected every industry and market, including the n-propyl bromide market.

Analyzing the current scenario, the global economy may take years to recover from the current recession. Developed countries such as Germany, France, the United Kingdom, and the United States are poised to contract by 8% to 10% in 2020. With these countries being key consumers of n-propyl bromide, market growth will decline until the midterm forecast. East Asia has been the least affected region and the largest consumer, which will assist market growth during the midterm forecast period.

N-Propyl Bromide Market: About the Report

Fact.MR has segmented the n-propyl bromide market on the basis of function, application, and region.

“This Table of Contents prepared is confidential and intended exclusively for the individual or entity with whom it is being shared. Reading, disseminating, distributing, or copying this to any party other than the addressee(s) is unauthorized and prohibited.”

Global n-propyl bromide market is poised to embark on a positive growth trajectory, registering a CAGR of 2% across the forecast period (2020-2030)

Who are the key players in the N-Propyl Bromide market?

Emergency Medical Service Products Market is poised to reach US$ 50 Billion by 2032 and grow at a CA...

Magnetostrictive materials market is set to witness steady growth throughout 2020-2030. Increased us...