The global IBM Watson services market analysis shows that global demand enjoyed year-on-year (YoY) growth of 27% in 2021, to total a market valuation of around US$ 3.2 Bn. IBM Watson language services are expected to dominate the landscape over the coming years. Under end use, the hospital and pharmaceutical sectors are set to experience a growth rate of more than 30% through 2031.

As per Fact.MR - a market research and competitive intelligence provider, historically from 2016 to 2020, global market valuation of IBM Watson services increased at nearly 27% CAGR, wherein, countries such as the U.S., Germany, China, Japan, India, and South Korea held significant revenue share in the global market.

What are the Driving Factors Facilitating Opportunities for IBM Watson Service Providers?

With growing understanding and interest of organizations towards cognitive technology, adoption of IBM Watson services has been surging consequently. Watson is a disruptive technology that processes accurate information at a high pace. The three distinct capabilities of Watson, including natural language processing (NLP), hypothesis generation and evaluation, and dynamic learning, have been increasing its popularity.

According to the Financial Times, certain regulatory changes can cost each bank up to around US$ 4 billion annually. Furthermore, increasing complexity in security landscape has been putting customer data and the brand reputation of banks under constant threat. Disruptive technologies and competition have been targeting most profitable parts of the businesses. IBM Watson’s Virtual Agent Solution and Digital Wealth Advisor stand as an answer to these prevailing challenges.

In the retail sector, IBM Watson’s application has been leading to customer satisfaction, as it has eased several customer handling issues of some of the major retail chains. A recent example is from The North Face, a retail clothing company started to use an app developed by Fluid Inc., which provides customers with patient and expert personal salesperson who can answer their common questions. This has reduced this clothing retail chain’s issues of losing customers due to lack of real-time sales associates.

Why is Demand for IBM Watson Products & Services Surging from the Healthcare Sector?

Biotech and pharmaceutical companies have been taking an average of around 10 years to develop a drug. Often, most experimented drugs are not able to hit the market shelves, which incurs huge losses to these companies. However, with the implementation of IBM Watson in drug discovery, the process has been accelerating.

Recently, IBM Health partnered with Barrow Neurological Institute, under which the latter used the former’s artificial intelligence to rank 1,500 proteins for its prediction-based association with amyotrophic lateral sclerosis (ALS). In this assignment, eight out of the 10 proteins ranked by IBM Watson proved to be linked to ALS.

Around 20% of patients bear 80% of the complete medical services industry costs, where these 20% address those people who need close consideration the executives. After computerized reasoning and intellectual processing has become an integral factor, experience of this cross part of patients appears to have changed to a great extent. As of now, IBM's Watson Care Manager have been overseeing around 147,000 patients' consideration plans around the world.

The BFSI is another sector that has started to see transformation set forth by IBM Watson. The concept of cognitive bank will end the process of customers repeating their queries to different customer care executives numerous times. A cognitive bank will not only recognize its customer’s voice individually, but also answer the questions during the first call. 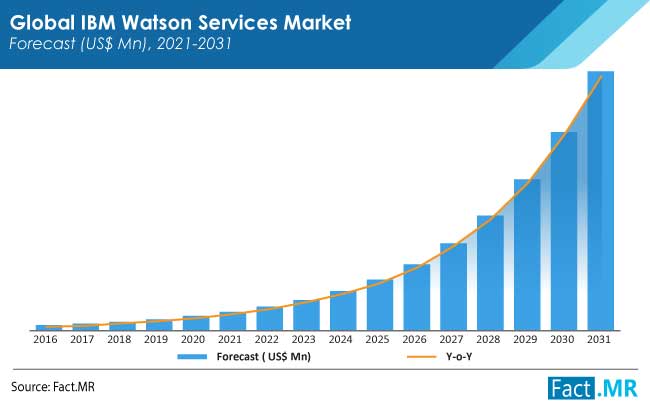 What Restraints Do Providers of IBM Watson Services Encounter?

IBM Watson services comprise time-intensive laborious training, driven by the requirement for experts to feed large quantity of well-organized and structured data into platforms for drawing insightful conclusions. In addition, it is capable of only drawing conclusions based on the data’s body on which it has been trained on. 'Well-organized' requirement is a key challenge constraining IBM Watson service penetration, as unprepared data sets are insufficient.

Another major drawback of IBM Watson services is their inability of making connections with different corpora, making extracting even basic insights a challenging task. Training IBM Watson on oncology has provided no insights on heart diseases – a limitation drastically confining its deployment in the clinical settings.

North America is expected to incline at nearly 33% CAGR and is expected to corner more than 50% market share by 2031. In 2021, the IBM Watson language processing market value grew year on year 25%.

The U.S. is expected to be turn out as the most promising country in North America and hold more than 90% market throughout the forecast period.

In Latin America, IBM has been entering into strategic alliances with the region’s leading IT companies for accelerating the penetration of its Watson services, and expand the application scope of these services’ cognitive computing capabilities.

IBM’s collaboration with Latin America’s leading IT integration company, GBM, sets a prime example of its efforts toward increasing its footprint in Latin America. Software developing companies in Latin America, such as Logiety, have created a digital platform on the IBM Cloud for boosting the speed of international customs processes. 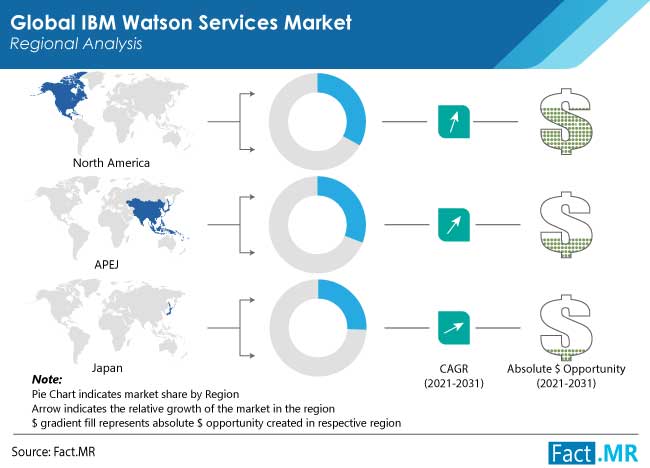 Why Do IBM Watson Service Providers Have an Eye on APAC?

Disruptive technologies such as blockchain and cognitive computing have been driving dramatic shifts in industrial sectors such as healthcare, finance, and tourism, in several regions, and emerging countries of APAC are no exception.

Recognizing the immense potential of its clients in APAC in shaping their business future, IBM has planned to help in commercialization and rapid prototyping of these clients’ solutions that are based on blockchain and cognitive computing.

IBM’s new APAC headquarters, based in Singapore, aims at bringing all types of organizations in the region together, for creating business solutions by leveraging Watson services’ cognitive and design capabilities. APEJ is expected to endure as a remunerative region for IBM Watson services over the coming years.

However, the U.S. is seen leading in IBM Watson services at a global level due to the presence of a large number of tech giants in the country.

How Has IBM Watson Services Been Shaping across Established & Emerging Markets?

Why Do Brushless IBM Watson Services Witness High Demand across the World?

Brushless IBM Watson services are estimated to be valued around US$ 8.5 Bn with a gain of more than 200 BPS by 2031.

Majority of companies considered in the report lean towards both, organic and inorganic growth strategies. Moreover, prominent players are interested in acquisitions, collaborations, and product innovation, along with providing the option of customized services to clients.

Similarly, recent developments related to companies offering IBM Watson services have been tracked by the team at Fact.MR, which are available in the full report.

The global IBM Watson services market is worth more than US$ 3.2 Bn at present.

Demand for natural language processing services is soaring owing to their efficiency, and is one of the key trends being observed in the market.

Growing demand for sustainable and reliable computing structure across multitude avenues stands as the core driver for the market.

North America accounted for over 45% of global IBM Watson service demand in 2020.

The United States, Germany, and China are key providers of IBM Watson services.

The market in Japan will expand at over 26% CAGR, with the country accounting for 5.6% share in the global market.

*165 figures and 69 tables includes by FactMR