According to International Monetary Fund (IMF), the global economy has maintained momentum. Economic activities in both emerging and developed economies accelerated in 2017 by a 4.6 percent and 2 percent respectively increase over 2016.

2018 is expecting a 1.9 percent increase in growth of developed economies and a 4.8 percent increase for emerging economies. This has remarkably influenced the aviation industry, which reflected a resilient nature since the aftermath of the global financial crisis.

Post 9/11, the aviation industry coped up that announced the possibility of huge potential growth which created many opportunities with respect to the development of airport infrastructure. 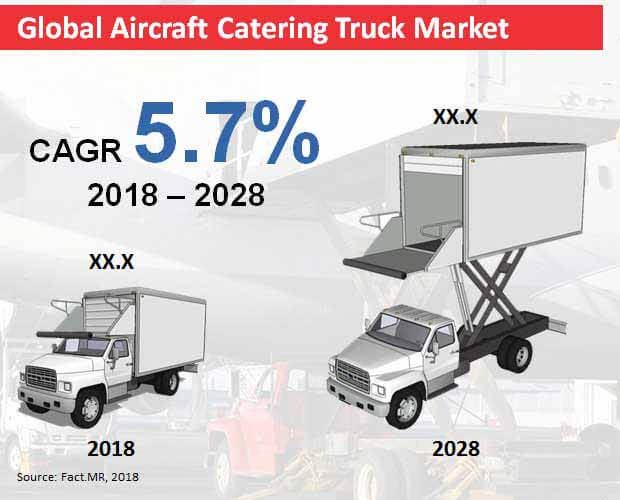 Air travel continues to gain high momentum with a growing number of people opting for air travel mode, either for leisure activities or business travel, albeit with higher costs associated with air travel.

According to IATA (International Air Transport Association), based on a 3.6 percent year-on-year growth, more than 7 billion passengers are expected to adopt air travel by 2036.

This has influenced aircraft manufacturers to enhance their production capacities to cater to this anticipated growing demand for air travel. With an increasing number of aircraft, consumption of food products is expected to showcase a cumulative growth, in turn mushrooming the demand for airport catering services and ground support, such as airport catering trucks.

In addition, the increasing popularity of sports has also augmented the adoption of air travel. So say, Japan is expected to showcase a significant opportunity from an investment standpoint, as the country is looking forward to enhancing its airport infrastructure for the 2020 Olympics and hopes to attract around 40 million tourists.

International Air Transport Association anticipates that the country will attract more than 60 million overseas visitors by 2030 with probable tourism receipts to exceed US$ 130 billion. The growing development of infrastructure in the country is expected to augur well for airport catering trucks during the period of forecast.

With the increasing demand for air travel, governments of various countries are investing in developing aviation infrastructure to build new airports. In the United States alone, there are more than 14,000 airports, which has become the biggest market for airport catering.

Emerging economies are also contributing to the worldwide airport count, with China leading in number followed by India as government plans to initiate airport development projects in these countries.

Considering the increasing air traffic and development of airports worldwide, it becomes imperative for airport management to provide consumer services, which include the availability of food products. Catering services are focusing on providing hygienic and refrigerated food with superior quality – a customer’s basic requirement.

This has pushed the use of superior airport catering services for onboard passengers and travelers flying via long haul flights which consecutively is expected to fuel the demand for airport catering trucks during the period of forecast.

The report on airport catering truck market provides an extensive analysis on every facet by including an in-depth market segmentation.

The airport catering truck market has been segmented on the basis of product type, refrigeration, capacity, max sill height, application and region.

The global market is expected to grow at a CAGR of 5.7% by the end of forecast period.

The global market is segmented on the basis of product type, refrigeration, capacity, max sill height, application and region.