Automotive suspension systems have largely been dominated by conventional combination spring and shock systems, in addition to anti-roll bars. The system has been found to be an affordable solution to issues associated with the responsiveness of a vehicle, drivability, or ride comfort. However, with the advent of driver assistance systems, electronic and air springs have gained importance in suspension systems.

Active air suspension systems are usually expensive, which has reduced adoption for common use. Also, improvements in terms of sensors allow for weight reductions, unlike hydraulic systems. Air spring systems have been found to be effective against body roll, without compromising on comfort and control. However, increased complexity has adversely influenced reliability and serviceability, making performance issues relatively expensive. As per a new Fact.MR report on the air springs for railways, trucks, and buses market, these factors are expected to influence developments in the years to come.

Further, according to the Fact.MR study, forecast for the air springs market accounts for a CAGR of over 7% from 2021 to 2031. Advances in ECU capabilities and optimized software for improvements to responsiveness are key factors that will drive impetus in the industry, post 2021, with a transition towards electric vehicles and the resurgence of transport for trade activities.

How is ECU Set to Affect the Air Spring Industry?

ECU or electronic control units are increasingly becoming mainstream in air spring systems. In terms of components, ECU is projected to reflect a relatively stronger rate of growth through the assessment period. Most air spring ECUs comprise memory, microprocessors, output drivers, and input conditioners. ECU plays a key role in electronically controlled air suspension systems, which enables improvements in terms of performance and vibration absorption. Changes in consumer preference towards electronically controlled systems would drive demand in the near future.

Commercial vehicle models from Volvo, Chrysler, Volkswagen, and Mercedes-Benz have already adopted ECU-based systems for their offerings. In a competitive automotive sector, this trend is expected to generate key opportunities for the expansion of the air springs sector.

What is the Role of Air Springs in Heavy-duty Transport?

According to the European Automobile Manufacturers Association, global production of commercial vehicles has risen from 2016 to 2018. However, production fell by more than 3% from 2019 to 2020, with China, North America, and Europe remaining the leading contributors.

On a similar note, as per the European Commission, rail freight transport grew by more than 10% from 2016 to 2018, while declining from 2019 to 2020. These slumps have largely been attributed to lockdown restrictions and reduced trade activities during the COVID-19 pandemic.

As per the Fact.MR report, sales of air springs for light and heavy commercial vehicles reflected a rise in 2019 and 2020 of 0.1% and 0.3%, respectively. However, gains from 2021 to 2031 are estimated to be relatively higher. Railway applications are also expected to gain significantly, displaying a growth rate of over 7% CAGR through the assessment period.

What are the Challenges Limiting Air Spring Sales?

Sales of air springs are expected to grow strongly over the coming years, especially in the commercial transport sector. However, the industry is expected to be limited during the assessment period, owing to factors associated to the industry and consumer preferences.

For instance, air spring systems cost substantially more than other suspension alternatives in terms of purchase, installation, and fuel overheads. Air spring systems are also susceptible to leaks, moisture damage, failure of tubing, and compressor burnouts that can impact performance. These issues are major considerations that limit the adoption of air springs in varying vehicle models. 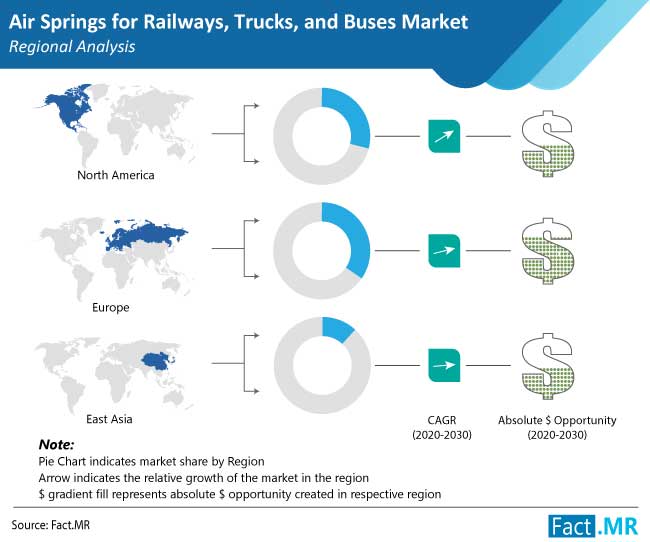 What Makes the United States the Largest Market for Air Springs?

The American Trucking Association has stated that, 36.9 million trucks were registered and used for business purposes (excluding government and farm) in 2018, representing 24.2% of all trucks registered. Further, 3.91 million Class 8 trucks (including tractors and straight trucks) were in operation in 2019, an increase of 2.6% from 2018.

North America accounts for approximately 1.5 million freight cars, with CSX, BNSF Railway, and Amtrak being major contributors. These factors are expected to remain key contributors to the air spring industry in the United States, making it the largest market in the world at over 20% of the global market share.

How is Germany Contributing to Demand for Air Springs?

Europe is a leading region for air springs, being led by Germany, which accounts for more than 20% of the European market share, as per Fact.MR data, with trucks and buses being major contributors to sales.

As per a European commission report, from January to March, trucks with GVW above 7.5 tons travelled over 10 billion km on toll motorways and federal roads in Germany. Consequently, the share of German trucks in terms of mileage rose from 58.5% to 58.9% in the first quarter of 2019 to 58.9% between January and March 2020.

Also, according to the International Railway Journal, overall passenger transport usage in Germany has grown by 14.5% (1.4 billion journeys), with the railways accounting for a major share of the growth (up 39.5%), followed by light rail/metro (up 22.4%). On the other hand, bus usage only grew 0.5%. These are key factors that are likely to influence the adoption of air springs in the German transport sector over the coming years.

Why is China a Lucrative Market for Air Springs?

As per the Fact.MR study, China is the leading market for air springs in the APEJ region, and the second-largest in the world, lagging behind only the United States, at over US$ 800 Mn in 2020. It is also the fastest-growing market in the region, displaying a CAGR of over 9%.

Further, as of July 2020, China’s operational railway length reached 141,400 km, ranking second in the world, while the high-speed rail network topped the world with a total length of 36,000 km, generating key opportunities for the adoption of air spring systems.

Why are Air Springs Most Used in Trucks?

Trucks are anticipated to account for more than one-fourth of the global market, while also reflecting a relatively faster rate of growth. Growth in road-based transport for trade and preference for height adjustments in truck cabins are key factors supporting long-term sales and adoption.

How are Sleeve Air Spring Sales Set to Fare?

Manufacturers produce air sleeves in single convolute, multi-convolute, sleeve, and rolling lobe configurations, with clamping and conical beads. Air spring setups with sleeve designs are expected to account for more than 30% of global sales through the forecast period.

Demand for sleeve-based air springs can be largely attributed to lower production costs, reliability in smooth function, and reduced number of pressure points that minimize the risk of failure, bolstering use, especially for on-road travel.

Why Do Plastic Pistons Reflect High Potential for Growth?

While most conventional air spring pistons are manufactured from steel, increasingly lower-weight alternatives such as aluminum and plastic are gaining popularity. Steel pistons accounted for more than 40% of the market in 2020. However, this share is projected to steadily decline in the years ahead.

On the other hand, plastic pistons are reflecting a relatively higher rate of growth of over 8% CAGR. Weight and emission reduction objectives of automotive OEMs are primary factors driving demand in the long-term.

What are the Prospects of Mechanical Air Springs?

Mechanical air springs allow for greater reliability in operations. However, electronic setups are providing benefits in terms of ease of use and higher levels of accuracy in adjustments, which will drive growth for the foreseeable future.

The global air springs market is moderately consolidated in nature, with market leaders taking efforts to maintain an international presence. Major players in the industry have strongly invested in the development and launch of new offerings for their portfolios, keeping up with frequent advances in associated technology.

How will the market expand through 2031?

As per the Fact.MR market study, the global air springs for railways, trucks, and buses market is likely to display healthy growth from interest in ride height adjustments in commercial transport vehicles, reflecting a strong CAGR of more than 7% throu

Which is a dominant air springs for railways, trucks, and buses market?

Asia Pacific excluding Japan currently is the leading market for air springs for railways, trucks, and buses. The market is driven by a massive automotive production hub in the region, led particularly by China and India.

How is COVID-19 impacting the market growth projections?

The COVID-19 pandemic has significantly affected growth in the global industry. Strict lockdown restrictions on the automotive sector, and reduced demand for new vehicles through 2020, have hurt the need for air spring systems. However, resumption of p

Who are some of the prominent market players?