The wetsuits market valued at US$ 1.72 Bn in 2022. Customers are likely to prefer full bodied wetsuits over other categories, with the segment scheduled to expand at a CAGR of 6% until 2032.

According to Fact.MR, market research and competitive intelligence provider, from 2017 to 2021, the global market for wetsuit has grown at a CAGR of almost 5%. Prominent manufacturers have been incorporating lightweight and eco-friendly material, emphasizing on such core features as ensuring swimmer safety.

Prospects experienced a considerable setback throughout 2020 and most of 2021, attributed to the prolonged recessionary impact induced by the COVID-19 pandemic. Restrictions on outdoor sporting and recreational activities significantly contracted sales of wetsuits across all continents. Eventually, as the peak of the pandemic wore off, several regions lifted lockdown restrictions, permitting a resumption in public water sporting events, restoring growth prospects.

As the standard of living increases, people are more likely to stay active longer and invest in sports equipment of high quality. The growth of inland surfing grounds, coupled with the development of artificial wave generation technologies, is expected to positively impact the industry's performance. Hence the market is likely to surge at a CAGR of 7.05% from 2022-2032.

The increasing use of technology and design has played a crucial role in enhancing the winter experience for everyone. Climate change and the demand for warmer clothing have increased the market demand for wetsuits. Market demand for wetsuits has been boosted by the popularity of water sports such as surfing, waterskiing, wakeboarding, windsurfing, kiteboarding, paddle boarding, swimming, SCUBA, kayaking, and triathlons.

The growing economy and rising disposable income have contributed to the popularity of wetsuits in the market. Due to an increasing concern over the different thicknesses of wetsuits, demand for recyclable wetsuits has increased. Due to the proliferation of technology in recent years, water parks and artificial waves, which are new developments, are expected to provide significant growth opportunities for the industry.

As the popularity of scuba diving activities grows amongst people in various parts of the world and tourism activities are becoming more popular, the market demand for wetsuits is expected to grow in the future. The Occupational Safety and Health Administration (OSHA) regulations concerning surfing equipment and gear have steered the growth of wetsuits. Government regulations on eco-friendly wetsuits are also driving the market demand for wetsuits.

The Research Behind Eco-Friendly Green Wetsuits: How is it changing the market?

Extensive research is being conducted on protective materials for wetsuits. Researchers are focused on four main areas such as structural properties, human anatomy, shark behavior, and maneuverability. Researchers at the University of Nebraska tested materials by embedding shark teeth in cement then forcing them into the material with a precision testing machine to determine their strength and flexibility.

Researchers examine thermal, mechanical, and sustainable properties of alternative materials for use in wetsuits and products of similar type and are developing an environmentally friendly alternative to neoprene wetsuit material. Many studies on natural rubber and neoprene-free materials have led to the development of eco-friendly wetsuits in the market. In addition, studies have been conducted on the thickness and size of materials that provide warmth to the human body under extreme climatic conditions.

A study has been carried out to investigate the accessibility of wetsuits on the market. Many studies were conducted on the stitching techniques that allowed water to penetrate the suit and were replaced by blind stitching in the market. To make the wetsuit stretch more while being put on, the single-layer was quickly doubled. To enhance flexibility and heat retention, new materials such as lycra and wool have been added to the mix.

How Recreational Water Activities are Propelling Demand for wetsuits in the U.S. market?

Wetsuits made in the U.S were the first zip-on wetsuits and were used by the United States Navy and Coast Guard dive teams to outfit them while they plied their diving careers in cold climate environments. The American-made wetsuit market is experiencing growth owing to its strong roots in tradition, innovative materials: an unmatched level of craftsmanship.

In addition, U.S. environmental regulations are stricter than those in developing countries, which protect the air, water, and of course the land. Consumers' growing confidence in the quality and durability of American-made wetsuits has also fuelled the growth of the US economy.

About 1.93 million people in the United States surf each year. Diverse activities associated with recreation and underwater exploration are driving the market for wet suits in this region. A market share of nearly 56% is expected to be contributed by the U.S. by 2022, making it the most lucrative market. The National Marine Manufacturers' Association (NMMA) estimates that over 140 million Americans engage in competitive water sports including surfing and deep-sea diving.

What are the Factors Driving the market demand for wetsuits in China?

China continues to be the second-largest market for wetsuits in the forecasted period. Increased production by small and large-scale manufacturers has greatly helped the wetsuit market to grow. Exports and imports from these regions have significantly increased the demand for wetsuits in the market.

Increasing interest inactive lifestyles in addition to efforts to strike a balance between leisure activities and professional pursuits have made outdoor sports a big thing. A combination of the increasing popularity of water sports in China combined with the development of innovative technology is anticipated to propel industry growth.

The Chinese market is projected to become the most lucrative market, contributing a share of nearly 46% of the global market by 2021. As a result of government initiatives that have been geared towards encouraging water sports in China, it is projected to offer lucrative business opportunities to manufacturers of wetsuits in the future.

What Opportunities will Boost Market Demand for Wetsuits in the U.K?

Wetsuit technology is increasing exponentially in the UK and improving each year. With the rise of sedentary and busy lifestyles, more consumers engage in activities like swimming and exercising outdoors. As a result, wetsuit sales have increased. With the surge in activities such as surfing and watersports in the market, wetsuit demand has increased.

Various export activities make it easy for manufacturers to expand their production and grow their business in Britain. Government regulations on environmental pollution have caused markets to flourish for wetsuits made from plastic, bottles, and nets found in oceans. 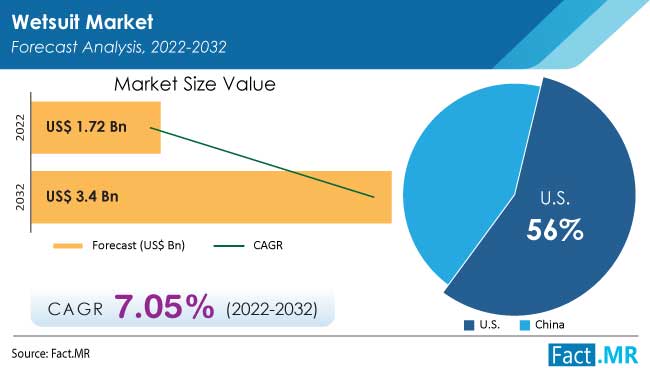 Are Full Wetsuits Expected to be the Largest Selling Wetsuit Category?

With the increasing demand to protect the body from extreme weather conditions both under and outside of the water, the market for full suits has grown tremendously in recent years. With an increase in demand to stay underwater for longer periods, a trend of full suits with hoods, gloves, and heated rash guards has been observed in the market. A CAGR of 6% is projected for full wetsuits.

How are Sports Variety Stores Contributing to the Growth of the Wetsuit Market?

Sports variety stores are likely to keep growing throughout the forecast period, registering a CAGR of around 5% from 2022-2032. A growing number of sports activities have increased market demand for variety stores in the market.

Surfing and allied industries are expected to surge with the advent of technological advances in artificial waves and wave parks. Sports variety stores will thus further experience an increase in market demand for wetsuits. With the increase in demand for used and rental options, wetsuit rental has become more widespread in the variety stores.

What is the Driving Force behind Increasing Wetsuit Sales for Women?

Strategic collaborations enable manufacturers to increase production and meet consumer demand which will increase revenue and market share. Manufacturers are developing products that incorporate eco-friendly materials that will prove to be more reliable, versatile, and improved insulation against the elements.

How much is the wetsuit market worth?

The global wetsuit market size is worth US$ 1.72 Bn at present.

Demand for wetsuits is expected to register a CAGR of 7.05% by 2032 in the global wetsuit markets.

How much is the wetsuit market expected to be worth by 2032?

What are the key trends in wetsuit in the global market?

Growing demand for various watersports activities are key trends in the global market.

What is driving the demand for wetsuits in the market?

Growing government regulations and demands for eco-friendly suits are driving the global market for wetsuits.

Who are the top 5 players in the wetsuit market?

What are the top 5 countries driving demand for wetsuit?

U.S., China, the U.K., Canada and Australia are the top 5 countries driving demand for wetsuit in the market.

How opportunistic is the market for wetsuits in China?

Wetsuit sales are expected to generate 46% revenue in China through 2022.

What is the outlook for the wetsuit market in the U.S?

The U.S is slated to account for 56% revenue by 2022 with respect to wetsuits

The global kiteboarding equipment market is estimated to expand around 4X by 2032. Kiteboards segmen...

Global snow shoes market will surpass a valuation of US$ 22 Million, expanding at a steady CAGR of 5...