However, manufacturers in the standard parts for tool making market repeatedly propose new B2C & D2C business models that supply enhanced service offerings to consumers to satisfy demand from end-use industries and increase stabilized sales through the type of supply network.

Historically, the market value of the standard parts for tool making industry showed a growth of 3.7% CAGR from 2017 to 2021. The global standard parts for tool making market has created an absolute dollar opportunity of nearly USD 593.5 million in the last five years. It is estimated to create opportunities of about USD 1.1 Billion and USD 1.5 million by the mid (2022-27) and long-term (2022-2032) respectively.

Besides, the rising investment in the consumer goods industry is likely to boost the demand for standard parts for tool makings in the region. South Asia & Oceania is projected to capture around 58 BPS and create incremental opportunities of nearly USD 35.2 million annually amid 2022 & 2032.

In terms of value, the Japanese standard parts for tool making market is the succeeding-largest market in the East Asian market. It is estimated to increase with 5.4% CAGR and provide remarkable absolute dollar opportunities during 2022 & 2032.

From the segmental analysis, based on component type, the punches & dies is the substantial shareholder. It has held more than 2/5th market share and is projected to rise at the CAGR of 4.8% amid 2022 & 2032.

Standard parts are secondary components that are used in presses or other metal forming tools in conjunction with the primary punch and die combination. Because of the increase in machine tool manufacturing and replacement of standard parts, the demand for standard parts in the country is likely to rise in the coming years.

It is a well-known truth that China has been at the forefront of manufacturing any industrial parts or systems, as well as autos, among other products. This increase in the manufacture of such parts and components leads to growth in a variety of end-use industries, which in turn influences demand for machine tools, bode well the expansion of standard parts.

Relaxation of trade barriers, expansion of foreign direct investment, and fixed asset investments all have a beneficial impact on the country's industrial scene, thus increasing the growth of the standard components market in China. However, it should be noted that no market is without its constraints.

The global standard parts for tool making market is expected to be triggered by demand from the automotive industry for various industrial activities during the forecast period. For many industries, the constant goal is to increase output by devising methods to boost productivity. The wide range of cutting tool insert embeds that is now available has significantly reduced production time while maintaining the product's quality.

For instance, HSS metal cutting tool inserts are now widely used by numerous businesses to offer high-accuracy items, and as awareness about the availability of these apparatuses increases, the market for the same is expected to thrive over the forecast period, 2022 to 2032.

Covid-19 Pandemic Slowed the Growth of the Market

The new coronavirus has rapidly spread throughout numerous countries and areas, having a massive influence on people's lives and the general community. It began as a human health crisis and has since become a major threat to global trade, economics, and finance.

Further, the COVID-19 pandemic has halted the manufacturing of several items in the tool making industry, owing to continual lockdown in key countries. Market leaders can only pay for complete lockdown for a part-time before having to alter their investing strategies. Furthermore, the number of COVID-19 cases is projected to fall in the near future when COVID-19 vaccinations hit the market.

However, this is also predicted to result in the re-starting of tooling companies at full capacity, assisting the market to recover by the beginning of 2022. After COVID-19 positive cases begin to drop, standard parts for toll making manufacturers must focus on protecting their employees, supply networks and operations, in order to respond to urgent emergencies and build new working practices.

What is the European Standard Parts for Tool Making Market Scenario?

The European standard parts for tool making market consists of numerous regional markets such as Italy, Spain Germany, France, etc. European markets account for around 19.5.0% of the overall market share. It is projected to grow at a CAGR of 4.3% in the coming years. This is escalating demand for different types of components such as guide pillars, Die & Gas Springs etc. in countries like Germany and the United Kingdom.

Furthermore, the East Asian standard parts for tool making market is largely dominated by the Chinese standard parts for tool making market which has attained nearly 2/3rd market share followed by South Korea and the Japanese market. However, East Asia is likely to grow at a CAGR of 5.6% and generate billion-dollar absolute opportunities during 2022 & 2032 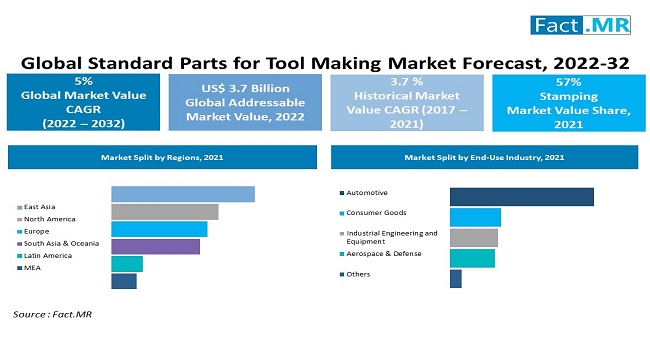 In terms of value, punches and dies account for more than 2/5th market share due to their high demand in presses and other metal forming tools, as well as their higher price point in contrast to other basic parts. Punches and dies are predicted to eventually dominate the market, taking a market share of about 42.3% in terms of value by the end of 2032.

Furthermore, the segment is predicted to increase at a faster CAGR than other segments and gain nearly 130 BPS during 2022 & 2032. The increasing demand for CNG based vehicles are creating tremendous demand for die & gas springs. Owing to this, the die & gas springs component type is likely to gain traction and acquire significant market share with a CAGR of 5.2% amid the forecast period.

Which Application is poised to Show lucrative Growth in Standard Parts for Tool Making Market?

Standard parts for tool making are having numerous applications such as stamping, forming, bending, punching etc. Stamping is largely adopted by different end-use industries owing to which it has acquired more than 55.0% market share.

Moreover, the majority of sales come from automotive, industrial engineering and equipment end-use industries. The rapid growth in the aforementioned industries is likely to increase the applications of stamping in the industries.

In addition, the segments of automotive and aerospace & defense are projected to increase at a CAGR of 6.4% and 5.8% respectively, amid the forecast years due to their augmented applications. This is likely to gain 140 BPS to the standard parts for tool making market over the assessment years of 2022-2032.

The global standard parts for tool making market is highly fragmented, with a significant number of local and regional companies. As a crucial strategy to strengthen their market footprint and better fulfil the needs of customers, industry players are focusing on developing new goods in response to the dynamic industry needs.

The global value of standard parts for tool making market is estimated to be worth over USD 3.7 Billion in 2022.

The demand is anticipated to surpass USD 6.3 Billion by 2032 end.

*148 figures and 78 tables includes by FactMR