The revenue generation of dredging is likely to accelerate at a steady CAGR of 3.3% to top USD 21.4 Billion by 2032. The demand for energy infrastructure in application is likely to increase at a CAGR of 4.5% over the forecast period of 2022 to 2032.

The trade activity in the dredging market is expected to reach a valuation of USD 4 Billion by the end of 2032. And, considering the fact that over 70% of trade by volume and 80% of trade by value are carried through sea. According to United Nations Conference on Trade and Development (UNCTAD), the overall seaborne trade volumes surpassed 10 Billion tons in 2020, with shipment trade to fall by 4.1% due to Covid-19 in 2020.

The outlook on global seaborne remains overly positive, with upcoming projects, such as One Belt One Road Initiative (OBOR) likely to provide growth opportunities to dredging manufacturers. The prospects of dredging industry are closely tied with the broader developments in the global tourism sector, as construction of new airports and beach replenishments accounts for a sizeable share of total revenues generated by dredging companies.

According to data from World Tourism Organization (UNWTO), the total number of international tourist arrivals in 2020 stood at over 210 Mn, which leads to fall of over 87% compared to 2019. Whereas, in application, the leisure activity is expected to hold a valuation of over USD 823 Mn in 2022. In spite of uncertainty in the global political sphere, the global tourism sector is projected to grow at a brisk pace in the foreseeable future, providing opportunities to dredging service providers in the due course.

What Makes China a High Potential Market for Dredging?

China is considered as the epicenter of world’s dredging market with a total market share of 86% in 2020. Backed by increasing trade and trade maintenance activities in the country, and well developed oil & gas industry, China has high potential for dredging equipment manufacturers.

In 2020, according to World Integrated Trade Solution (WITS), China had total exports of more than USD 2.5 trillion, and total imports of over USD 2.1 trillion. Such activities leads to hold a valuation in East Asia based trade activity market of USD 1.5 Billion by the end of 2032.

Recently, the Government of China decided to lower import tariffs on more products that are in high demand. While trade activities slowed down in 2020, they are likely to bounce back from 2022, which, in turn, is expected to provide heightened benefits to dredging players in the regions and elsewhere.

How is the Market for Dredging Expected to Fare in U.K.?

The U.K. is a dominating country in Europe with a revenue share of 21% in 2020. The rising demand from oil, mining and energy infrastructure is projected to propel the growth in the country.

Will India Based Dredging Market Remain Lucrative in Future?

India is a leading and lucrative market for dredging in South Asia & Oceania region owed due to highly advanced industries like energy, mining and oil & gas that have impelled the demand for dredging across the country.

According to the India Brand Equity Foundation (IBEF) in 2020, India is the world’s third largest energy consumer in the world. The India is likely to grow at a CAGR of 2% over the forecast period with a market valuation of USD 660 Mn in 2032. 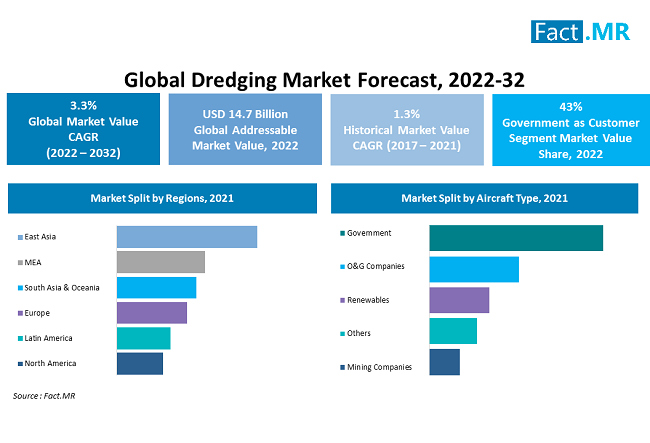 Why Energy Infrastructure holding a Highest CAGR in Application?

The demand for dredging is growing steadily with rise in requirements from various infrastructure projects, such as hydro, solar, and other renewable energy sectors. Rise in investments towards various energy infrastructure plans are further spurring the growth of dredging manufacturers.

The report has also stated with key projects in renewable energy and energy infrastructure, the financial cornerstone of the investment plan of European Fund for Strategic Investments (EFSI) has allocated to the energy sector 29% of financing approved by the European Investment Bank (EIB). Such statistics reveals the high potential of the market and the growth scope of key players over the coming years.

Why Oil & Gas Companies are Acquiring Popularity as Customer?

The demand for dredging is mounting exponentially with the development of the oil & gas industry. According to a report “Oil 2020- Analysis”, by the International Energy Agency (IEA) in 2020, the global oil production capacity is likely to grow over 5.9 mb/d by 2025.

According to the United States Energy Information Administration (EIA), the distillate fuel consumption is expected to reach at 4.0 mb/d on an average by 2022, which is 97% of consumption in 2019. With such increase in production and consumption of oil & gas, the manufacturers in the dredging industry will come across greater opportunities to leverage on in the near future.

The aforementioned players have robust network of customer around the globe. The front runners in the market are tech giants with deep pockets which allows them to participate greatly in development.

Moreover, these companies also deal with diversified services which are custom-made as per individual customer. The growth strategies implemented by prominent players are contracts & agreements, new product developments and collaborations to resist their market position.

Some of the key developments in the market are:

Similarly, recent developments by top providers of dredging have been tracked by the team at Fact.MR, which are available in the detailed report.

What are the key factors driving the dredging industry?

Waterways trade and transport are crucial factors determining dredging needs. The rising need for alternative waterways for trade fosters the need for the development of infrastructures such as ports and waterways.

Government investment is rising in the dredging industry which opens scope for growth in the future. Technical advancement in form of dredger monitors will make it more efficient and drive growth in the forecasted duration.

Are there any environmental concerns associated with Dredging?

In a certain way, dredging is useful for the environment as it removes subtidal benthic species. However, it might change the level of suspended sediments or particles which may lead to random changes in water quality that may affect marine ecology.

Impact of Covid-19 on Dredging

The lockdown period and immediate financial crisis were faced by dredging manufacturers. The supply chain disruptions led to a lack of raw material and emergency health services were also affected severely. However, in the upcoming day’s recovery in equipment markets is projected to grow.

The government is likely to reach at a valuation of USD 9 Billion by the end of 2032.

The East Asia region is expected to account for over 29% of market share in 2022 and is likely to grow 1.5X over the forecast period.

Urban development segment is likely to have a revenue share of 10% in 2022.

*201 figures and 61 tables includes by FactMR