Demand for bactericides used in soil treatment is rising rapidly, primarily because more bactericides and other nutrition enhancers are being applied, and because plant growth regulators are becoming more common as a means of preventing pest attacks during the early stages of crop production.

According to Fact.MR, a market research and competitive intelligence provider, worldwide demand for bactericides is projected to rise at a CAGR of 4.6% from 2022 to 2032.

Rising need for effective solutions for better soil protection is expected to foster the demand for bactericides. The use of bactericides is expected to grow significantly owing to the demand for cleaner, safer, and secure crops that require good soil health. The pesticide industry has witnessed significant transformation in the past few years, in terms of crop protection chemicals.

Surge in the demand for food, fueled by the increasing population, has resulted in the ever-increasing strain on the agricultural sector. In countries with high population growth, there is a threat to people from food insecurity.

Food security is one of the key factors driving the growth of the global bactericides market during the forecast period. Bactericide is a chemical that kills and prevents the growth of agricultural bacteria. Change in climatic conditions is one of the key contributors to the increase in the lifespan of bacteria, which, in turn, is expected to generate more demand for bactericides.

In addition to bacteria, insects and nutrient levels of soil, etc., also affect the growth of crops. Moreover, growing awareness of health and food security are also contributing to the growth of the bactericides market, globally. 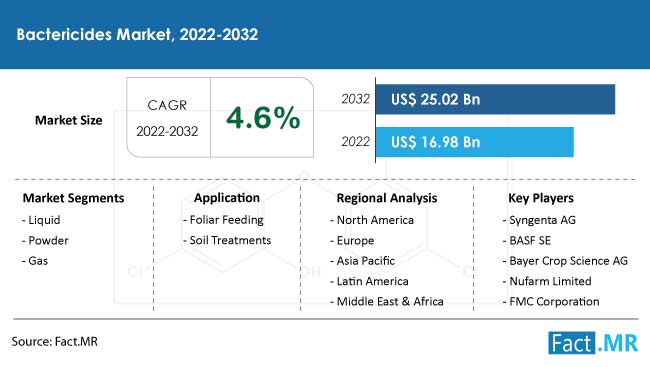 Which Markets Trends are Fuelling Sales of Bactericides?

Bactericides prevent crops from bacteria, fungi, etc. Increasing awareness regarding health has resulted in burgeoning demand for food and horticulture crops, which has led to more opportunities for bactericide suppliers.

Applications of bactericides provide better crop yield and distribution of obtained output. These factors are expected to bolster the growth of the global bactericides market during the forecast period.

Apart from walnut blight, the bactericide helps tackle diseases in the pome fruit growers and also helps in effective cherry production. These factors are expected to drive the demand for bactericides over the coming years.

How Can New Entrants Influence the Bactericides Market?

Aspiring market participants are concentrating on joint ventures, new product introductions, and the research and development of novel crop bactericides that may be less hazardous to the environment and human health, more effective, and more biodegradable & biocompatible as compared to other bactericides.

Which Regions are Dominating the Bactericides Industry?

Europe leads with 28.7% share in the global bactericides market. The increased use of bactericides in line with cutting-edge agricultural techniques and the rising demand for food security in the region are factors that are driving the market expansion.

With a 23.6% market share, North America is expected to witness significant growth opportunities owing to the rise in R&D efforts for the development of products.

Increasing demand for high-quality crops and growing awareness about the adoption of bactericides and bio rational fungicides to avoid bacterial infections in crop yields are the factors driving the market expansion in the region.

Rapidly growing population and rising growers' inclination toward effective crop protection products are driving the market growth in Asia Pacific. The increased availability of agricultural land in countries such as China and India contributes to the rising demand for bactericides in the region.

Which Crop Type is Expected to Account for High Usage of Bactericides?

“Growing Consumer Awareness Regarding Security of Food Crops from Bacteria”

Based on crop type, the bactericides market is segmented into food crops, plantation crops, cash crops, and horticulture crops.

Food crops are expected to remain dominant during the forecast period owing to their growing demand as a result of an increase in population globally. Recently, the focus of the agriculture industry has shifted towards the security of crops from bacteria. Farmers around the globe need to increase crop production, by improving productivity on existing agricultural lands by using bactericides to kill bacteria.

The bactericides industry has been distinguished by the existence of several bactericide manufacturers that operate with a wide range of product holdings. To raise knowledge about the value of employing these compounds, which ultimately results in the effective production of diverse crops, many key companies are concentrating on forming strategic alliances with local agricultural associations and regional distributors.

The global bactericides market is set to rise at 4.6% CAGR through 2032.

The U.S., Germany, and China are the top 3 countries in this market.