Coffee is a popular beverage among consumers across the world. Vietnam, Colombia, and Brazil are the top countries that produce green coffee. Several developing nations highly depend on coffee to sustain their local economies. However, the U.S. holds a significant position as a provider of green coffee beans and its population is the largest consumer of coffee in the world.

Complementary food items and beverages are other major products that are being sold by coffee shops in recent years. Juices, soft drinks, bottled water, cold blended beverages, espresso drinks (café lattes, cappuccinos), and brewed coffee and tea are generally widely available at coffee outlets. Moreover, some other food products that are provided by cafes include candy, sandwiches, desserts, bakery items, and pastries.

There are various coffee shops that sell ground or whole coffee beans for consumption. Further, some coffee shops also sell mugs, grinders, espresso or coffee-making equipment, and some other accessories. A majority of coffee shops serve premium or high-quality coffee, known as specialty coffee.

The most committed and typical coffee drinkers are 25 to 45-year-old and educated & affluent adults. Although baby boomers are majorly responsible for the success of coffee shops, specialty coffee appeals to different adult demographics that include young adults and college students. There are some larger companies that sell coffee beans through wholesale platforms to commercial customers such as restaurants and grocery stores.

What are the Demand Opportunities in the Coffee Shops Market?

A noticeable driver responsible for the growth opportunities in the coffee shops industry is in the form of international and domestic expansion. The distribution channels in this industry are the stores that are company-operated and are located at high-visibility and high-traffic centers. The competition in the industry is structured to gain industry share through opening new shops in the retail coffee industry across the globe.

Product innovation is the second noticeable driving force that is predicted to bolster growth avenues in the global market. Serious coffee shop contenders are currently providing the option for product selection to their consumers. Various national chains and some local coffee shops also boast menus that include bottled water, pastries, hot chocolate, teas, coffees, and even sandwiches.

The extensive R&D abilities of Starbucks is a vital factor that is assisting the group to surpass early coffee house entrants that include Gloria Jeans.

In addition, product innovation at Starbucks also includes factors related to customer acceptance and the extent the product can fit into the “ergonomic flow” of the store.

Peet’s Coffee, Caribou Coffee, and Starbucks provide consumers with pre-paid cards that are helpful to shorten the transaction times for consumers. These companies also bring new customers through gifting cards as well as supply stores with some valuable consumer data. The CEO of Starbucks, Schultz, has called the innovation “the most significant product innovation since Frappuccino”.

Service innovation is also putting impacts on the industry where companies need to provide a diverse set of services that include newspapers, drive-through services, and music to stay competitive.

“Consumer Perception of Brands to Shape Growth Opportunities in Industry”

The opportunities in the coffee shops market are impacted by the perception of consumers about any brand and its stand.

Thus the marketing efforts in the industry have closely tied to the lifestyle that is projected by a certain chain. In an attempt to differentiate themselves, market competitors are taking efforts to gain a competitive edge in the market. These competitors attempt to differentiate themselves from stores that are “upscale, pseudo-European” while projecting different brands of lifestyle.

Technology plays a vital role to drive growth opportunities for coffee shops. Line management is a noticeable issue for the coffee houses as the majority of demand is concentrated during morning timings. For example, Starbucks can achieve consumer service effectiveness with the introduction of automatic espresso machines.

Dunkin Donuts has experienced lesser resistance to its technological innovations because of the economical nature of its products. The brands of the company are tied to simplicity. For instance, instead of relying on baristas for the creation of the new line of drinks for espresso, Dunkin’ Donuts hired experts for designing a machine that can make cappuccinos in a time of less than a minute, and that too at an economical price as compared to its market competitors.

Which Factors Can Restrict Expansion Opportunities for Coffee Shops?

A major problem that is encountered by different cafes is quality consistency, satisfactory service, and staff management. They need to invest a handsome amount for customer retention, premium locations, equipment, shops, and marketing that include brand recognition and brand awareness. In addition requirement for high capital investment to rent a place, remodel it, and install the equipment is also predicted to impact the expansion avenues for coffee shops.

High rent at premium locations makes it difficult for many independent cafes to sustain for a longer duration. Thus, these factors are predicted to put a negative impact on the expansion opportunities for coffee shops.

The popularity of strong brands, especially Starbucks, Café Coffee Day, and others can limit the expansion opportunities for new entrants in the market. Further, partnerships with international and large companies can serve as a potential barrier to the entry of new competitors, for instance, the partnership of Starbucks with Jim Beam or Pepsi and Caribou Coffee with Apple. 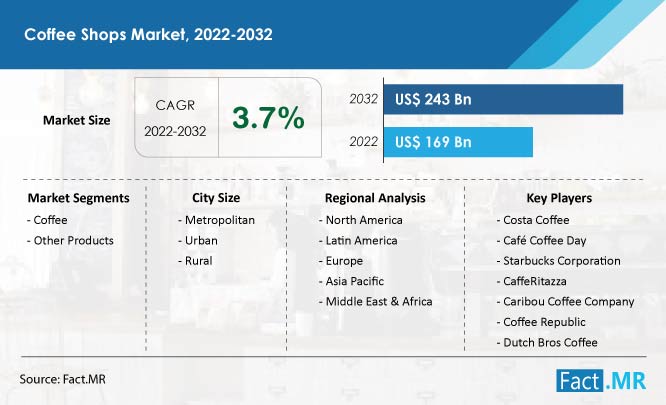 How Can New Market Entrants Acquire a Share in the Coffee Shops Business?

New companies trying to enter this difficult market landscape can similarly look to partner with other market players to make a space for themselves in this market.

Which Regional Market Dominates the Industry of Coffee Shops?

The region is working as the largest importer of coffee and fulfilling its demand from producing countries. Starbucks is serving as one of the largest coffee-selling chains in the world whose headquarter is in Seattle, Washington.

Further, the European market is estimated to grow at a noticeable speed with the rapid growth in the coffee culture across the region.

Which European Nations are Predicted to Be Lucrative Markets?

“Rapidly Increasing Consumption of Coffee in Germany and Surrounding Countries”

The market in Germany is likely to progress at a CAGR of 3.2% through 2032. This steady growth is due to the rising consumption of coffee by its people at coffee shops, their homes, and cafes. Moreover, these factors also lead to an increased demand for coffee machines in Europe.

How is the Coffee Shops Industry Faring in North America?

“Busy Lifestyle Driving Demand for Cafes in the U.S. & Canada”

The U.S. market reached a valuation of over 36 million in 2021. Further, the market in Canada is estimated to progress at a CAGR of 3.6% through 2032. This growth is attributed to the rising consumption of coffee due to long working hours and the busy lifestyles of people that increases the requirement for a refreshing beverage such as coffee.

Why is Coffee as a Product Gaining Popularity across the World?

“Increasing Demand for Coffee in Raw Form by Cafes, Grocery Stores, and Restaurants”

Based on product, the market is bifurcated into coffee and other products. Between these two, coffee is likely to hold a dominating position in the global market owing to rising demand for it by grocery stores, restaurants, and cafes in raw form. In addition, the majority of consumers around the world can afford to spend on this product.

“Metropolitan Cities with Presence of Various Cafes Lead in Industry“

Metropolitan, urban, and rural are divisions of the global market based on city size. Among these, metropolitan cities are likely to hold a dominating position in the global industry due to the presence of numerous cafes that include chain and independent cafes and restaurants.

Café chains such as CCD, Dunkin' Donuts, and Starbucks match the specific requirements of the population and launch their outlets across cities.

Companies owning coffee shop chains are incorporating various strategies and developing many new methods and techniques to increase their customer base.

For instance, state-of-the-art technology is serving as a pivotal factor in coffee shops to serve differentiated and high-quality products. The advantages related to high-level machines and technology are shorter waiting times for consumers. In addition, this high-level technology can create various unique, new, and fresh flavors.

Revenue from the coffee shops industry is likely to reach US$ 243 billion by 2032.

Worldwide demand for coffee shops is expected to increase at a CAGR of 3.7% through 2032.

Worldwide demand for coffee is likely to reach US$ 130 billion by the end of 2032.