Over the past two years, coffee consumption has dramatically increased. The same growth has also been observed in the demand for gourmet coffee. The availability of choices from multiple brands and high quality beans has been driving the growth of the coffee market.

Unlike the growth of the overall coffee market, the coffee pods market has not seen a major change. Consumer preference for coffee pods has been tarnished due to the high environmental footprint of used coffee pods.

Concerns involving coffee pods has also been expressed by regulatory bodies and manufacturers. To alleviate the factors leading to a loss in the market, manufacturers have embraced the usage of compostable coffee pods.

Key players in the market are the forerunners for the movement. The adoption of sustainable coffee pods by manufacturers is likely to boost the future prospects of the coffee pods landscape, and help alter consumer perception regarding coffee pods. 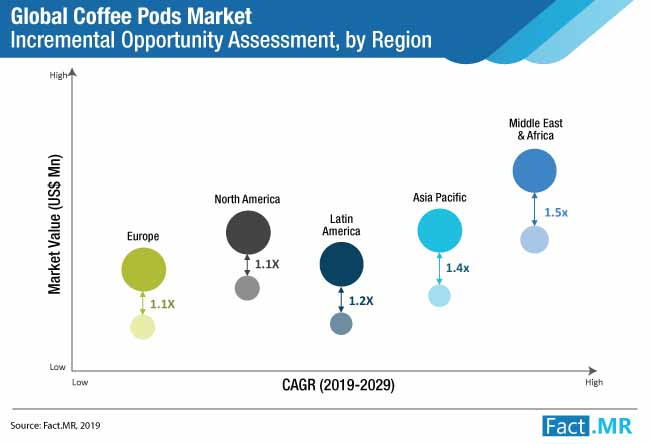 According to the United States Department of Agriculture (USDA), coffee production across the globe, which was estimated at ~169 million, 60 kilograms bags in the year 2018-19, is likely to decrease slightly in 2019-2020, primarily due to Brazil’s Arabica trees entering the off-year of the biennial production cycle. The market for coffee beans is likely to sustain moderate growth in the global market for the year 2019.

Gourmet Coffee Pods to Attract the Attention of Coffee Connoisseurs

With specialty coffee becoming an affordable luxury, particularly for avid coffee aficionados, leading players in the coffee pods market are introducing products with exclusive flavors and unique origins. International coffee chains are willing to deliver innovative flavors to attract coffee lovers, and enhance their coffee sales, which is instigating a new trend in the coffee pods market.

Efforts in the value chain for coffee pods production to enhance the potential of gourmet coffee is likely to work in favor of the market. 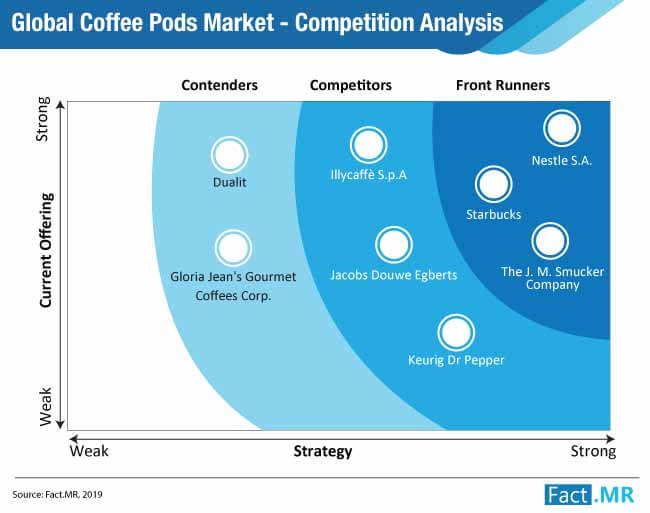 Global Coffee Alliance to Change Status Quo of the Market

Nestlé S.A. gained the rights to market, sell, and distribute Starbucks packaged coffee and tea in all at home and away from home channels. The alliance has amplified the growth of Nestlé S.A. and Starbucks alike.

Nestlé S.A. noted a record increase in the stock price of 2.9%. The popularity of Starbucks BY NESPRESSO for coffee at home has been boosted since this partnership. The partnership of the companies has changed their standing in the overall coffee pods market.

One of the reasons to complement this situation is the decline of the Kraft Heinz Company. Kraft Heinz has reported a decline in its sales, as it is struggling to keep up with consumer trends. The position of the company in the coffee pods market has also declined.

This Nielsen Breakthrough Award is awarded to products based on endurance, sales, and product distinction. Working on the lines of sustainability, illycaffè launched the new line of illy-brand aluminium capsules for coffee pods in February 2019.

Similar work for sustainability was carried out by Nespresso, an operating unit of the Nestlé Group. Nespresso has partnered with a Swedish company, Velosophy, to produce a bike made from used aluminium capsules, in an effort to motivate customers to recycle coffee pods.

Segmentation based on the most attractive sites of the coffee pods market has been provided in the form of a segmentation table in the report.

Consumer preference for coffee pods has been tarnished due to the high environmental footprint of used coffee pods.

Coffee Pods Market is Expected to Grow at 6.3% CAGR