Resources about recreational robots, robot games, and activities intended to entertain us. Robot builders tend to be hobbyist machines that vary in complexity and cost. Weight classes are used in robot battles where the heaviest robots are stronger and more devastating.

Combat robots are gaining traction among the youngster as this allow users to battle with their robots with utmost thrilling experience. There are local and international level championship paving path for the unit sales of combat robots.

From 2018 to 2022, the global market for combat robotic kits registered a CAGR of 7.1%. Fact.MR, a market research and competitive intelligence provider, reveals that the market will exhibit growth at 10.4% CAGR between 2023 and 2033. 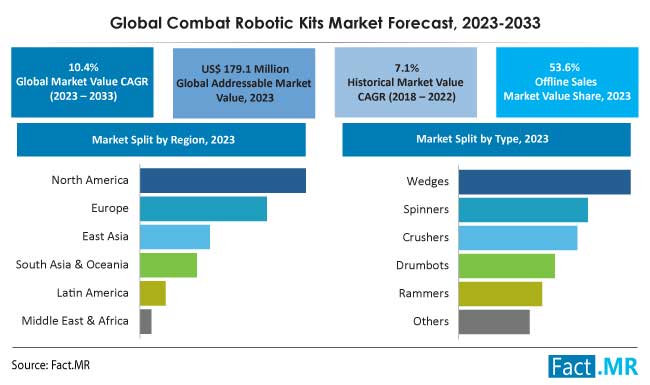 Market share analysis of combat robotic kits based on region and type is provided in the above image. Under the type segment, wedges sub-segment dominates with 25.7% market share in 2023.

“How Sports and Robotics Market Are Following Parallel Growth Curve”

The global sports Industry was valued at US$ 383 Bn in 2020. This value has been growing moderately during the past few years. Also, a number of people are understanding the importance of sports and are becoming increasingly at greater pace. The increase in amateur as well as professional participation in sports will increase the spending on sports and related technology.

Robotics and automation are intensely reforming the global economy. From simple manufacturing industries to sports, robots are doing everything and are everywhere. From faster operations to superior quality products and effective processes, robotics provides enormous value for the economy.

The sports industry is no exception to this general trend. As the technology becomes more sophisticated and accurate, robotics is increasing in functionality and making light work of tasks that are cumbersome for human workers. The global investment in robotics was more than US$ 135 Bn in 2020. The growing integration between sports and robotics will lead to the growth of the market for combat robotic kits.

The combat robot battle championships are getting higher popularity in terms of viewership and participation. The significant portion of players are participating in the championship and battle are university level student. These students build their customized robots, which are unique in terms of attack style, defense component, speed and flexibility. These university level participants are the primary customers for the sales of combat robotics kits.

Owing to which the market for combat robotics kits is expected to gain potential rise growing 2.7X over the forecast period.

What is the Restraining Factors for Growth of Combat Robotics Kits?

“Higher Pricing and Cost of Customization will Limit Market Adoption”

Combat robotics kits are significantly expensive and involve high capital investments, starting from the production phase to owning and maintaining. Over the years, continued technological developments like the use of sensors, heavy combat mechanism has contributed in increasing the product cost.

This has been a factor of concern for the combat robotics kit market for added customization, as increasing product costs are affecting the minimum selling price, resulting in a decline in equipment sales. Expensive equipment operating and maintenance costs restrain consumers from buying the directly and further customizing.

Why U.S. is Expected to Drive Combat Robotic Kits Demand?

Sports in the United States are a significant element of American culture. In the United States, American football is the most popular spectator sport, followed by baseball, basketball, ice hockey, and soccer, which make up the five main sports.

However, recreational sports such as combat robot championships is gaining significant popularity among the U.S. population. Number of youngster and university students are taking primary interest in building and fabricating combat robot with high level of customization

Owing to aforementioned factor, the market for combat robotics kits is expected to reach valuation of US$ 60.5 million in 2033.

To attract a new customer base, market players have been involved in practicing unique market strategies, one of which includes custom solutions in combat robotics kit. From the past decade, manufacturers have opened deals with customers promising customization of the product based on the end-use on the specific ground.

In U.K. there are number of university and robot club which are actively organizing combat robot events. The championships are allowing robot enthusiast to build their custom combat robot using the robotic kits. Owing to which there is high demand for combat robotics kits, which is expected to reach valuation of US$ 14.2 million in 2023.

How Professional End Users have Higher Spending for Combat Robots?

Combat robot are significantly used for the battleship and competition of strength of robots. The participant in this event are majorly professionals who built custom robots, to display their skills for wining over others in terms of strength, speed as well the impact of attack.

The combat robotic kits are manufactured particularly for professional and customized as per the championships. As professionals have higher spending as compared to the individuals, the market for professionals will reach market valuation of US$ 96.5 million in 2023.

Why Wedges is the Leading Type of Combat Robotics in the Market?

Continuous research & innovation by the market players is energizing the implementation of advanced technologies in the sports industry. Though technology has always been a crucial element in the sector, AI (artificial intelligence) is a relatively recent addition in the combat robotics kit market and is attracting investment.

For instance, AI-based combat robotics kit is being infused effectively in global championships leading to more technologically advanced robot. Wedges are the most preferred type of combat robot accounting for nearly 25.7% of market share in 2023.

Customization has given a free hand to the customers to demand solutions that fit their specific end use. Overall, customers have the opportunity to get customized combat robotics kit manufactured from scratch. Even local and DIY product market players have started giving such options to the customers, thus creating a trend in the global combat robotics kit market and contributing towards the market growth.

Also, combat robotic kit manufacturers are developing competitive pricing strategies to stay ahead in competition while generating healthy profits. They are offering their products to leading players in the world championship in form of branding and marketing to get the presence to mass audience.

Worldwide demand for combat robotic kits is anticipated to reach US$ 481.6 million by 2033-end.

*98 figures and 112 tables includes by FactMR