The global crowd control barrier market is estimated at US$ 1.9 billion, and is predicted to surpass a valuation of US$ 7 billion by 2032, expanding at a stupendous CAGR of 13.7% over the next ten years.

Based on historic growth trend analysis, the global crowd control barrier market size observed 6.1% CAGR during 2017-2021. The market created an absolute dollar opportunity of US$ 366 million in the last half-decade.

The North America crowd control barrier industry is the leading market shareholder and has captured more than one-third market share. However, it is expected to lose 164 BPS by 2032 over 2022, while expanding at a CAGR of 13.1%.

The East Asia crowd control barrier market holds around one-fifth market. It is projected to create an absolute dollar opportunity of nearly US$ 1.1 billion over the forecast period. The Chinese plastic crowd control barrier market is upholding its foremost position in East Asia by acquiring almost half of the overall market share. It is projected to witness growth at 14.6% CAGR and provide high absolute dollar opportunity over the forecast period.

Demand for the fence barrier type grew 1.2X in the past half-decade, and is estimated to grow 3.6X in revenue over the assessment years. However, belt barriers, under the post barriers type, are projected to grow at 12.9% CAGR and create an absolute $ opportunity of nearly US$ 581 million by the end of 2032.

Fact.MR projects the global crowd control barrier systems market to witness growth at 13.7% CAGR while taking a jump in revenue generation post 7.4% year-on-year drop during 2020, owing to the global pandemic.

What are the Demand Growth Drivers for Crowd Control Barriers?

Stadiums, halls and other recreational activity events are always under pressure to enhance revenue by increasing the count of spectators. These crowds can sometimes become tense and create chaotic or uncertain situations, leading to loss of control as well threat to property.

Managing masses of people within a relatively short time frame is critical for security, especially when crowd density is high. Inefficiency in the management of crowds can cause dangerous contingencies at stadiums and halls.

Such incidents are forcing organizers and managers to keep proper tools and equipment in place to manage crowds at events. Crowd management equipment is an essential tool that plays a crucial role in managing crowds. This is likely to drive crowd control equipment sales over the coming years.

Though social distancing measures have been relaxed, some offices and communities are still maintaining social distancing procedures. This means that organizations may need to form socially separated zones at their events and concerts.

Companies are trying to reduce the prices of their products without compromising product strength, stability, and reliability. To achieve this, leading players are looking for numerous opportunities such as opting for economies of scale, reducing higher inventory costs, also adopting the just-in-time approach, as well as developing an integrated sales channel to avoid margin leakage.

Technology advancements for manufacturing has been the prime approach inculcated by manufacturers to have an upper hand in the highly competitive market. 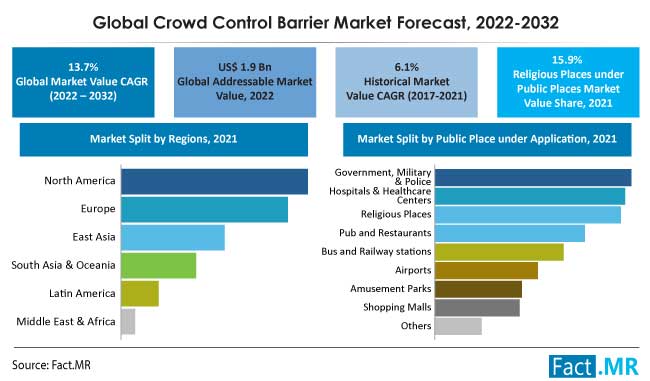 Why is Germany a Leading Crowd Control Barrier Market in Europe?

Europe is one of the leading manufacturers of crowd control barriers, owing to market-leading companies such as ZND Holding BV, Tensator Limited, Armorgard Ltd., Mojo Barriers BV, and many more.

Expansion of the event industry in Germany along with demand from corporate offices, sporting and social events, schools & universities, etc., is offering lucrative opportunities for crowd control barrier suppliers.

The Germany crowd control barrier market holds more than one-fifth of the European market share. It is projected to surge ahead at a CAGR of 13.6% over the assessment period.

Labor availability, favorable regulations, and various projects run by governments are encouraging manufacturers to reposition their manufacturing units in emerging countries such as Thailand, India, Indonesia, and others.

Furthermore, abundant availability of steel and other basic raw materials such as aluminum, plastics, etc., and startling population growth in these countries, are creating significant demand for crowd control barriers.

The India crowd control barrier market is rapidly emerging as a lucrative space. Leading players are keeping their eye on the country to gain higher profits. India is a market where labor cost is very low, and it has a large consumer base, which makes the country drive consistency in demand.

Sales of crowd control stanchions in the Indian market have increased significantly in the last few years. It has captured more than one-third market share in the South Asia & Oceania crowd control barrier market.

The Indian market is anticipated to gain 36 BPS and offer an absolute dollar opportunity of around ~US$ 203 million during the assessment period.

Why are Fence and Post Crowd Control Barriers Highly Preferred across Geographies?

Moreover, a prominent segment is belt barriers under post barriers, which is holding nearly 20% market share and is projected to expand at 12.9% CAGR through 2032.

Based on application, crowd control barriers are segmented into public places, commercial spaces, and others (rallies, exhibitions, disaster mgt.).

Public places account for more than two-fifths market in 2022 due to the increased applications at airports, bus and railway stations, religious places, shopping malls, and the like.

Moreover, crowd control barriers are largely used at religious places and hospitals & healthcare centers, which have acquired nearly 15.9% and 16.2% market share, respectively. In addition, the government, military & police segment is expected to hold more than 15% market share in 2022.

As public places require higher security and controlling of crowds from time to time, this segment is expected to provide high potential for revenue generation over the coming time frame.

The global crowd control barrier market is largely conquered by the North American and European regions due to the existence of key manufacturers and higher demand.

Market players are keeping R&D as a priority to fabricate innovative products to reduce product pricing. As the market is highly competitive, price points are strategically mapped by manufacturers in order to gain an upper hand in the market.

How much are crowd control barrier sales in 2022?

The global crowd control barrier market is worth US$ 1.9 billion in 2022.

How is demand for crowd control barrier systems expected to reach over the forecasted period?

Crowd control barrier sales are set to surpass US$ 7 billion by 2032.

How has the market performed historically?

During the historic period of 2017-2021, global demand for crowd control barriers increased at 6.1% CAGR.

Which crowd control barrier companies are leading the market?