Eating insects is nothing new for humans; for thousands of years, tribes all over the world have made them a staple food. Growing food security and hunger issues across the world demonstrate the use of insects as food.

Numerous insect species contain significant amounts of vital proteins, lipids, and vitamins, as a result of which, insects are often used in feed, food, and drinks. The combined use of edible insects for animal feed and human food increased by a compound annual growth rate of 12.2% during the historical period 2017 to 2021.

Moreover, rising demand for animal-based food, as well as feedstuff, will increase the attraction towards edible insects to fulfill the nutritional demand. Apart from this, edible insects are a worthy option to fill the gap between the rising population and hunger issues across regions. It is estimated that around 2 billion people across the world consume thousands of insect species as part of their regular diet.

In addition, government initiatives towards growing environmental issues will create an opportunity for sustainable insect farming. The adoption of farming, semi-domestication, and wild harvesting techniques for the production of edible insects will drive market growth.

Fact.MR suggests that the development of new technologies in insect harvesting will aid market expansion, which is anticipated to exhibit a high-value CAGR of 18.5% from 2022 to 2032.

The global market for edible insects registered a CAGR of 12.2% between 2017 and 2021, and according to Fact.MR, a market research and competitive intelligence provider, it is projected to expand at a high 18.5% CAGR between 2022 and 2032. 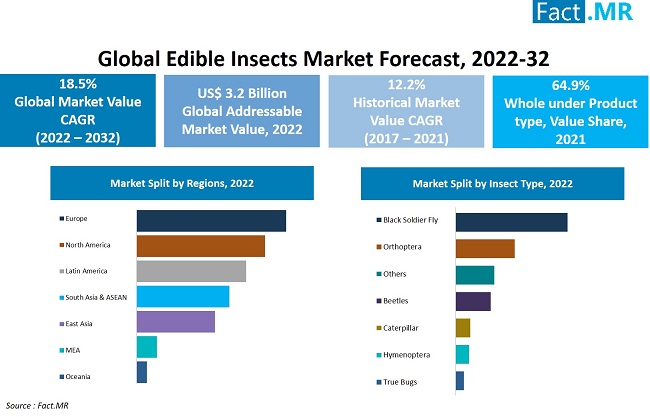 Market share analysis of edible insects based on insect type and region. Under the insect type segment, the black soldier flies sub-segment dominates with 39.4% market share in 2022.

Why is the World Witnessing Increasing Consumption of Edible Insects?

“Health Benefits of Edible Insects being Acknowledged by More People”

The eating habits of people will completely shift over the coming years. The world will be able to secure both a healthy way of life and a healthy planet with the help of effective, sustainable solutions. As such, in the near future, there will be huge demand for edible insects such as edible worms, crickets, ants, etc., as food because they are highly protein-rich and environment-friendly alternatives to conventional animal products such as beef and pork.

Additionally, the difference in nutritional content between edible insect protein powder and conventional protein powder is a key trend driving market growth. When it comes to production, for the extraction of protein, edible insect farming needs 8 to 10 times less land, 5 times less water, and emits 5 to 10 times lesser greenhouse gases, which are important factors catching the attention of more people and governments across the world.

The alternative protein market is gaining traction across the world, which creates a huge space for proteins made from edible insects. Edible insect-based protein has many advantages over plant-based and animal-based proteins in terms of low production cost and high affordability.

Which Factor is Acting as a Dampener for Market Expansion?

Although various cultures around the world use insects as traditional food, very little is known about how they might negatively influence the human body. Food allergies are a rising concern across the world, which creates hesitation for edible insects in consumers’ minds.

Moreover, despite promising developments, providers are expected to face significant obstacles, such as changing consumer preferences, stringent trade barriers, and an unreliable supply of raw materials and other industrial inputs.

Why is China a Highly Lucrative Market for Edible Insect Providers?

The China edible insects market is currently estimated at US$ 200 million and is expected to reach US$ 1.8 billion by 2032.

In China, the level of acceptance has been high for the consumption of edible insects for decades. The fact that up to 20 different kinds of insects are commonly consumed in China opens a plethora of opportunities for key market players in the country. In China, nutritional values of over 174 species–including edible, feed, and medicinal species–are accessible, which is why China's edible insects market growth is expected to be noteworthy.

Seeing that edible insects have been a traditional or cultural meal in the region, East Asia as well is predicted to exhibit significant growth in the market for edible insects, even though the sales of edible insects are mostly concentrated in China at the moment.

Several international organizations are looking into the possibility of future alternative food and feed products as a result of the effects of population growth and food production on the environment. One of these options is edible insects, which is driving the demand for edible insects as food for human consumption as well as animal nutrition.

The United Nations has promoted insect consumption nationwide, highlighting the advantages that insects have as a food source for the environment.

Such developments are paving the way for the widespread adoption of edible insects as food in Europe and North America.

The Europe edible insects market is expected to reach a valuation of US$ 800 million in 2022, while North America is predicted to reach US$ 700 million.

Why are Beetles the Most Widely Consumed Insects?

In fact, almost two billion people frequently consume a diverse variety of cooked and raw insects. Many insects have as much or more protein, fiber, healthy fats, and essential minerals as other food sources.

One of the most popular human-consumable edible insects in the world is beetles and their larvae. Consider mealworms, which are the larval stage of a particular type of darkling beetle that is widespread in temperate climes. Comparable amounts of proteins, vitamins, and minerals are present in mealworms just as in fish and meat.

Thus, beetles, as edible insects, have seen a steady increase in acceptance in the recent past, surpassing a market valuation of US$ 400 million in 2021.

Why is Market Growth Expected to Be Led by Whole Edible Insect Consumption?

Edible insects will probably be consumed on a far larger scale as a whole as compared to the individual ingredients. Edible insects are marketed whole to be devoured by people in Asian nations such as Thailand and China. Additionally, they are a staple of the local street food in many countries. Companies are now offering packaged edible insects as a whole in dry, BBQ, and raw forms due to the growing popularity of edible insects in the whole form.

As a result, the edible insects as a whole segment is predicted to create an absolute $ opportunity of US$ 9.1 billion by the end of the assessment period.

The global edible insects market is primarily characterized by a large number of multinational players controlling a majority of the market share. Producers of edible insects are aiming for global expansion and are bringing in cutting-edge approaches to insect breeding and raising to boost both, productivity and quality. To introduce competitive and flexible insect production and processing technologies, businesses are investing in research & development operations.

How much is the edible insects market valued in 2022?

The global edible insects market is currently valued at US$ 3.2 billion.

At what rate did consumption of edible insects increase over the previous years?

How is the market for edible insects expected to fare through 2032?

Global demand for edible insects is anticipated to reach US$ 17.6 billion in 2032.

Which regional market is the most attractive for edible insect suppliers?

Which type of edible insect is most widely consumed?