As a result, electro-optical systems are primarily used to improve target identification, monitor targets in various weather conditions, and assess threats from a given distance. These systems can be installed on aircraft, vehicles, helmets, ships, and military weapons, or even used as a hand-held detecting device.

Electro optical systems are utilized to enhance the abilities of military and commercial applications due to their long-range imaging capabilities and high image stabilization. These systems are widely utilized, particularly in the defense sector, for a variety of applications such as fire control systems, situational awareness, search and rescue, airborne homeland security, and intelligence, surveillance, and reconnaissance (ISR). Growing demand for sophisticated defense systems and equipment is expected to drive the sales of electro optical systems.

Moreover, electro optical systems are used in the aerospace industry for non-destructive testing. Furthermore, border protection authorities make considerable use of these systems to track an invasion effort. As terrorist operations increase across numerous ountries, there is a huge demand for improved monitoring systems and the need to prevent terrorist organizations' incursion efforts.

Some of the major tasks of the armed forces are intelligence, surveillance, and target acquisition, which are supported by electro optical systems. These systems include multispectral day and night imaging sensors, infrared targeting pods, and laser rangefinders (LRF). Such features have contributed to the growing demand for electro optical systems in the defense and military sectors.

Why is Demand for Electro Optical Systems Escalating?

Advancing manufacturing technologies are accelerating the development of unmanned vehicles for air, land, and sea platforms. Unmanned vehicles are increasingly being used for commercial and military purposes such as policing, surveillance, product delivery, agricultural monitoring, and navigation, among others.

With advancements in remote operations, the defense sector is experiencing a rapid acceptance of unmanned vehicles for military use. Current unmanned vehicles include cameras and integrated sensors that give many wavelength information for precise monitoring and detection.

Electro optical systems are fitted on the majority of unmanned aerial vehicles (UAVs) to obtain reliable information and a noise-free image of a target present at a mid-range or long-range wavelength. UAVs are also employed for situational awareness, intelligence, surveillance, and reconnaissance applications.

As a result, manufacturers are focused on the deployment of miniaturized equipment to suit the expanding demand. These small-sized devices can provide better performance and great dependability, making them an excellent choice for military and commercial aircraft applications.

Furthermore, the aerospace sector has strict criteria for the weight and size of aircraft components. As a result, the aviation sector is increasing its demand for smaller equipment. 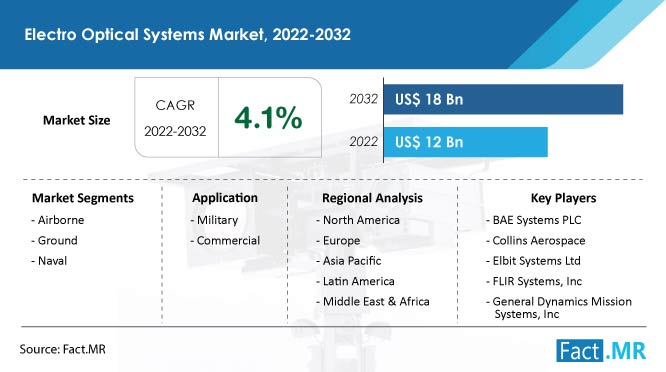 Why is the United States a Leading Market for Electro Optical Systems?

North America captured 34% of the global sales of electro optical systems in 2021. The United States is expected to lead North America during the forecast period.

The growing adoption of technologically superior UAVs is projected to bolster the sales for electro optical systems in the United States.

How is Germany Driving the European Electro Optical Systems Market?

Europe accounted for 22% of the worldwide market in 2021. The demand for electro optical systems in Germany is anticipated to rise during the forecast period.

Germany plays an important role in the European market due to substantial investments made in R&D to develop resilient, lightweight, and cost-effective electro optical systems for mission-critical operations.

Why is Demand for Electro Optical Systems Snowballing in Japan and South Korea?

The sales of electro optical systems in Asia Pacific are expected to skyrocket due to developing territorial issues and substantial rises in military expenditure.

Application-wise, the electro-optical/infrared (EO/IR) systems market is split into military and commercial.

The growing need for technologically improved security and surveillance systems is one of the main factors pushing the demand for electro optical systems in the military sector.

Electro optical systems have several advantages. For example, low-light cameras are employed in cases of limited visibility because they provide superior performance with less power consumption and greater output. Furthermore, laser range finders are employed both during the day and at night and in practically all environmental circumstances, such as smoke, haze, rain, and fog.

Moreover, electro optical systems include features such as guidance for defense gunnery, 360-degree rotation, and automated object recognition. These systems can distinguish targets both during the day and at night and in low and high contrast settings.

The global market for electro optical systems is very competitive due to the presence of several significant competitors competing in both the domestic and international markets. The market is moderately concentrated, with a few key firms controlling a sizable portion. Key players in the electro optical systems market are pursuing tactics such as mergers and acquisitions and product and technology innovation.

The global electro optical systems market is valued at US$ 12 billion in 2022.

Sales of electro optical systems are expected to reach US$ 18 billion by 2032.

North America accounted for the largest market share of 34% in 2021.

Europe accounted for 22% share of the worldwide electro optical systems market in 2021.