The global engine flush market is has reached a valuation of around US$ 1.5 Bn. Sales of engine flush are slated to accelerate at a steady CAGR of 3.8% to top US$ 2.2 Bn by 2031.

Most the automotive engines today are running on conventional fuels such as petrol and diesel. OEMs are executing designs that can make engines work in a smooth way; however, the amount of foreign particulates and dust that collects inside an engine affect its precision.

Developments in the consumption of fuel technologies have instrumented the implementation of the engine flush type of lubricant, which is basically oils that can drain out all the sludge and dirt gathered in an engine and its components.  Due to this importance, the market is likely to grow 1.5X over the forecast period.

With rising level of pollution and substantial upsurge in the contamination of fuels such as diesel, sales of engine flush will continue to rise in the automotive industry, and this will lead the market to enjoy a valuation of US$ 2.2 Bn by 2031.

Prominent manufacturers of automotive lubricants and vehicle oils will capitalize on the need to free engines of sludge and varnish.

What is the Global Scenario for the Sales of Engine Flush? 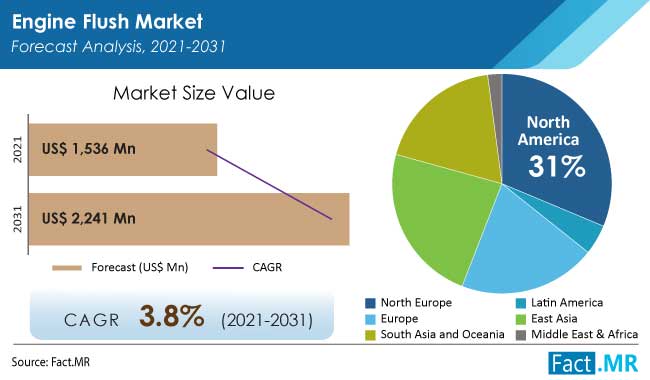 Since the first commercial car was launched by Ford in the initial period of the 20th century, IC engines has prominently evolved. The internal parts of engines are now exposed to much more heat and tension. This also has steered to very high RPM engines that require better quality of engine flush.

Transmission systems inside an automobile have also become better with vehicles getting to 150 miles/hr speed. This is expected to lead the market for engine flush to evolve and expand at a growth rate of 3.8% over the assessment period

How the Market in U.S. Shaping Up for Engine flush Sales?

The U.S.-based engine flush market has been experiencing decent growth, driven by innovations in vehicles. The U.S. is likely to dominate the market in North America due to continuous increase in usage of vehicle and other machinery.

The country is likely to hold a market share of more than 65% in North America.

How is Brazil Faring in the Market for Engine Flush?

Brazil is considered as one of the prominent automobile manufacturers in the Latin American region. The Brazil engine flush market is expected to enjoy a valuation of more than US$ 10 Mn in 2021, and grow 5X by 2031.

The semi-synthetic type of oil is among the key engine lubricants used to flush out contaminations composed inside engines. With the comprehensive life of lubricants, semi-synthetic oils effectually serve as engine flush for regular maintenance of vehicle engines. 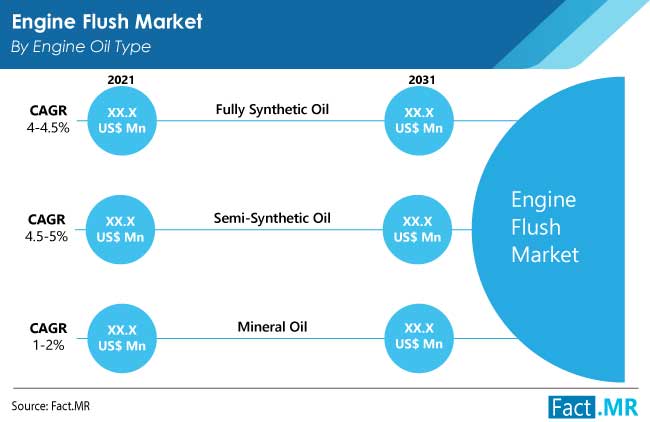 The automotive industry is likely to dominate the global engine flush market with a market share of 48% in 2021, and is likely to expand at a CAGR of 4.9% through 2031.

Heavy investments in R&D and rising production of various types of vehicles are likely to drive the automotive segment over the forecast period.

Progressions in fuel consumption technologies have compelled the need for using lubricants or oils to flush out dust composed in combustion engines. The marine segment is expected to be valued at US$ 428 Mn by the end of 2031.

Owners of vehicles are repairing their automobiles with appropriate use of engine flush products. The role of such oils in extending vehicle life, refining the performance of the engine, and decreasing the total carbon footprint of combustion engines, continues to drive their use in the automotive sector.

What is the global market value of engine flush in 2021?

The global engine flush market is currently valued at more than US$ 1.5 Bn.

What are the forecasts for engine flush demand?

What was the last 5 year’s market CAGR for engine flush?

What is mainly driving demand for engine flush across the world?

Rising need for cleaning of engines is majorly driving demand for engine flush across regions.

How much market share is enjoyed by the top 5 engine flush suppliers?

Which are the top 5 countries driving demand for engine flush?

What is the outlook for the market for engine flush in East Asia?

At what rate is engine flush sales expected to increase in Europe?

Which oil type is dominating the engine flush landscape?

Semi-synthetic oil is likely to hold a dominating position with 46.2% market share of engine flush in 2021.

Electrical Calibration Equipment Market to observe a growth of ~6.0% CAGR by 2031. Chemical industry...

The global tar paper market is likely to witness steady growth through 2018-2028. The growing constr...

Corn Oil Cake Market to witness healthy growth by 2030. The rising investments in the poultry and li...