An aerial vehicle that can transport specialized payloads for use in industrial applications is known as an industrial drone or UAV. Energy, defense, security, mapping and surveying, and law enforcement are some of the industries that often use UAVs.

Industrial UAVs are often more highly engineered than commercial drones, offering better range and flight times, more sophisticated avionics systems and controls, and the ability to deploy a variety of payloads, such as specialized imaging technology, sensors, and custom payloads for research and surveying applications.

In sectors like oil & gas, mining, marine ports, and other significant industrial sites, drones create new opportunities and increase efficiency. They have evolved into extraordinarily strong, adaptable industrial instruments that can handle a variety of tasks. Drones are being used more and more by industry professionals to enhance operational efficiencies and optimize industrial processes.

From 2018 to 2022, the global market for industrial drone registered a CAGR of 15.4%. Fact.MR, a market research and competitive intelligence provider, reveals that the market will exhibit growth at 18.4% CAGR between 2023 and 2033. 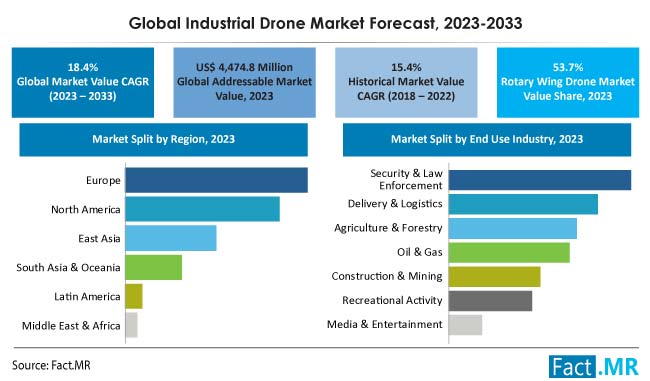 Drones are now used for a variety of applications including surveillance, military operations, agriculture, video recording, film, and television. As drone applications proliferate, prominent players in the U.S. drone market are implementing advanced technology into their drones. The increased payload capacity of drones, the introduction of drones for specific applications, etc.

In addition, companies are now also producing drones specifically for industrial use, giving priority to higher-powered drone engines. Product advancements in drone technology allow drones to travel at speeds of up to 100 miles per hour, which also helps transport products.

Major companies are investing heavily in the research and development of advanced industrial drones and various drone accessories, which is driving the market growth. The market value for 2033 is estimated to be 5.4X that of 2023.

“Growing agriculture industry to lead to the utilization of industrial drones”

Warmer climates will reduce maize, rice, and corn yields as insect breeding increases. It is the main factor driving the growth of industrial drones in this industry. Due to the shortage of skilled workers in the fields, farmers are investing in drones to reduce time investments for tasks such as crop monitoring and seeding compared to manual labor.

The need for drone technology in agriculture was seen as a priority when cultivating large tracts of land. In addition, long-range and continuous monitoring of agricultural fields using various features such as thermal imaging cameras, customizable controls, propulsion systems, GPS, and flight plans will further facilitate the utilization of industrial drones in agriculture. The industrial drone market is poised to garner an absolute dollar opportunity of US$ 20,575.1 million during the forecast period.

What Do Industrial Drone Manufacturers Need to Watch Out for?

Drones are widely used around the world in industrial, commercial, military, and civilian applications. The industry and its end users have experienced severe restrictions on drone flights in different countries in recent years. These key elements are designed to simultaneously support drone operations in different regions and protect against environmental and property damage.

Some countries allow commercial flights of small drones beyond line of sight (BVLOS), and some have mandatory licenses to fly.

A challenge for the drone industry is the lack of air traffic control infrastructure responsible for safe flight operations in designated airspace. The presence of integrated air traffic management can create drone-related security and minimize operational challenges. All these factors create a stumbling block in the way of market growth.

What makes U S Growth Epicenter for the Industrial Drone market?

The United States is home to some of the world's largest drone players. The member ecosystem map is denser than ever, exciting for American drone fans. Along with the hardware and software of drones, drone services are also in high demand. This has spawned many drone companies and startups.

One example is the US-made drone delivery company Zipline, which raised $190 million to operate delivery services. Zipline's medical drones have gained worldwide attention as they began delivering medical supplies and COVID-related assistance during the pandemic.

Efforts to develop UTM (Unmanned Traffic Management) systems by the country have not gone unnoticed. Government infrastructure is growing and looking to develop this type of system to benefit everyone working with drones. This also comes with several disclaimers and exceptions for further drone innovation. U.S industrial drone market will grow at a healthy CAGR of 15.3% during forecast period.

How the Various Application of Drones Support Industrial Drone Market in the China?

China manufactured 2.9 million units in consumer drones. A large part of this success is due to China-based DJI, the world's largest drone manufacturer. The company accounted to hold 70% of the global drone market share. China's industrial drone market is poised to grow at a CAGR of 17.5% during the forecast period.

China's dominance in battery technology, which underpins the domestic electric vehicle market, is also boosting the production of industrial drones. CAAC encourages local governments near drone sandboxes to adapt their procedures to their local environment and needs, within harmonized national standards. China will capture a revenue share of 74% in the East Asia region.

How Oil and Gas Industry Will Lead to Market Growth?

Drone delivery and other features of the drone are widely used in industrial applications, especially transitions between land and sea. Drones can transport critical equipment between facilities based on land and sea vessels faster and cheaper than other manned alternatives.

Although payload weight is constrained and dependent on drone types, material management applications at oil and gas facilities exist for drones and UAS. The drone provides a unique bird's eye view in the event of an industrial accident, enabling faster response and assistance.

Companies are utilizing new laser-based sensors to identify and detect compromised material faster and cheaper than before. These sensors are detachable payloads that attach to the underside of the drone and allow it to fly near equipment efficiently and quickly. The industrial drone due to oil and gas is poised to grow at a healthy CAGR and achieve a market valuation of US$ 599.6 million in 2023

The fixed-wing drone flies autonomously, with little or no human involvement, and can collect data without a human on board. The use of fixed-wing drones in defense operations has increased significantly around the world.

In January 2021, European missile group MBDA successfully hit a test target with a new anti-tank missile, the Missile Moyenne Portee (MMP), using target data collected by area drones. A fixed-winged drone that operates out of the operator's field of vision, according to MBDA officials. The market will capture a market share of 20.9% in 2023.

The global market for industrial drones is segmented, which includes both major players as well as new entrants. Therefore, players must try to distinguish their products using cutting-edge technology and unique items in order to prosper in such a competitive climate.

In order to maintain market positions in this highly competitive environment, product prices can be made user-friendly, which could have a slight negative impact on the revenue generation of manufacturers but will provide better sales of the product.

The market is likely to reach a valuation of US$ 24,226.5 Million by the end of forecast period.

Europe region holds the leading market share of around 35.4% in 2023 and presumed to increase in same growth curve by the end of 2033.

Germany is expected to have CAGR of 16.3% during the forecast period.