Overall, the IoT in elevator landscape is expected to generate an absolute dollar opportunity of US$ 67.2 Billion by 2032. Sales of IoT in elevators for preventive maintenance will continue to flourish, with a documented CAGR of 13.3% from 2016-2021. Furthermore, the global IoT elevator market, including passenger transportation as well as AI-assisted commodities, is predicted to grow at a CAGR of about 16% during the forecast period.

According to market research and competitive intelligence provider Fact.MR, the IoT in elevators industry grew at a CAGR of 14.2% from 2016 to 2021. Smart cities and innovative construction projects are poised to see rapid growth over the forecast period of 2022-2032 as a result of the significant increase in the number of investments, along with increased attention to modernizing and developing infrastructure.

The advancement of the IoT market is anticipated to be driven by the surge of demand for secure and energy-efficient systems due to the mounting demand for IoT in elevators. Devices powered by IoT technology can manage big data streams and perform predictive maintenance in elevators. For instance, during the Covid-19 crisis, Huawei cloud IoT and Wanglong introduced a contactless elevator ride.

The elevator reservation system operates on the company's Internet of Things platform, which allows centralized control of elevators, cameras, bluetooth, and other subsystem linkages. The system can be accessed by mobile APPs, WeChat Mini Programs, or mobile devices with Bluetooth functionality. It also solves the issue of long waiting times and unauthorized elevator use, in addition to removing physical contact with the elevator.

In the post-pandemic era, elevators will only increase in expenditure as the world returns to normalcy. Taking into account the ongoing IoT innovations across numerous sectors, countries are prepared for an acceleration in the current fiscal year as they discover new smart transportation facilities inside residences. From 2022 to 2032, the global IoT in elevators market is expected to grow 1.2x.

Urban cities around the world are undergoing consistent transformations due to a global increase in economic development and the expansion of infrastructure. A host of factors have led to the growth of IoT in elevators over the past decade, including increasing government, initiatives for the creation of smart cities, greater awareness of IoT's capabilities, enhanced safety features, and real-time monitoring of unusual activities.

IoT is expected to be one of the main factors driving the growth of elevators in the market ever since firms have become increasingly reliant on smart solutions to protect their property and even safeguard it against external or internal threats. In the assessment period, private investment in urban development projects, especially in developing regions is expected to provide a significantly positive impact on the IoT in the elevators market. In addition, growing economies, along with a growing interest on expanding leading industries, are expected to generate additional demand for IoT in elevators during the forecast period.

In addition, the implementation of IoT in elevators is expected to witness an upward trend in the coming years as predictive monitoring of elevators gradually gains traction as more and more cities and countries are implementing IoT systems in their elevators. Furthermore, advancements in technology, the use of artificial intelligence and machine learning in elevator technologies subsequently lead to the development of smart solutions for managing and maintaining elevators virtually, further propelling market demand for IoT solutions in the elevator market. The need for smarter elevators has led to innovative IoT solutions being developed by several players in the current market landscape which will further boost various innovations over time.

Maintaining and Servicing Infrastructure May Hamper Growth of IoT in Elevators

This technology implementation in elevators involves a significant initial investment, which may hinder the development of the IoT market in elevators. In the future, high costs of large-scale IoT investments will likely limit the adoption of IoT in elevators in some industries, especially residential.

Installing connected and IoT-enabled elevators requires a large capital investment that includes equipment costs, service fees, and maintenance which might further decline the growth of IoT in elevators. The cost of internet, electricity, and internet connectivity for these systems also adds to the overall costs of these systems. As a result, small builders are unlikely to adopt the systems in the market.

Smart elevators with IoT-enabled security and automated access control systems end up costing more than conventional elevators due to the addition of such systems in an IoT-enabled platform. This makes it impossible for smart elevators to be used in low-story buildings or apartments. In addition to these obstacles, low product renewal rates, excessive costs associated with the product certification process, steep as well as volatile raw material prices are all limiting the market for IoT-enabled smart elevators. In this way, the high costs of installing IoT-enabled elevators are significantly hampering the growth of the IoT in elevators market. 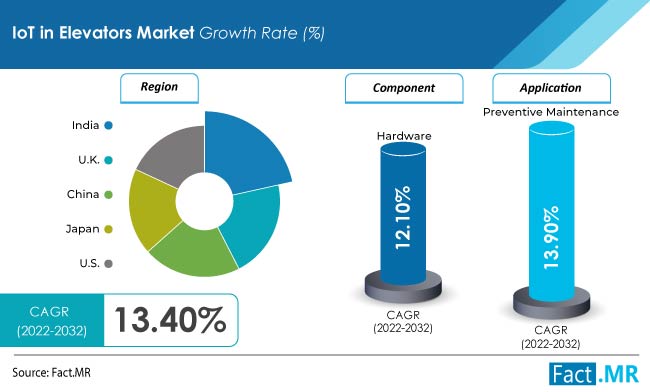 Is India Poised to Become a Significant Market for IoT in Elevators?

Globally, the UN Department of Economic and Social Affairs projects that urbanization will increase primarily in India, China, and Nigeria. There will be an additional 416 million urban dwellers in India, 255 million people in China, and 189 million people in Nigeria according to the report. A growing urban population has led to a need for additional infrastructure, resulting in an increased demand for smart elevators in the market.

Stringent government regulations have also taken the initiative to promote green infrastructure in the market. Due to the rising consumer demand for energy-efficient, safe and smart elevators, the market is likely to become more prominent in the coming years. Elevators that are intelligent and connected will become increasingly popular as a result of the growing demand for energy conservation and population shift. Hence, the IoT market for elevators is growing.

What factors influence the growth of IoT in Elevators in the U.S.?

According to Fact.MR’s study, the U.S is poised to yield an absolute dollar opportunity worth US$ 17.9 Billion, expanding at a 12.6% value CAGR from 2022 to 2032. The industry is expected to have a market valuation of US$ 25.9 Billion by the end of the forecast period.

As smart equipment becomes increasingly prevalent in high-rise buildings, the IoT elevator market is expected to gain traction in the years to come. In particular, it is in this regard that the United States market offers the best opportunity for growth, due to the availability of major players as well as a strong IoT infrastructure, as well as the rapid rate of technological progress and digitization that are already manifesting themselves.

Country-wise Forecast CAGRs for the IoT in elevators Market

Which Component will be the Most Important IoT in the Elevator Market?

Hardware Components to Remain Prominent in the Forecast Period

According to Fact.MR, the IoT market in elevators of hardware components will register the most rapid growth between 2022 and 2032, growing at a CAGR of 12.1%. Construction businesses have traditionally invested more in the procurement of superior quality hardware components to ensure safe and secure transportation facilities and have seen heightened growth prospects for elevators in recent years.

Growing acceptance of remote surveillance for smart elevators contributes to growth in the hardware sector. As part of services, designers and engineers take into account factors such as installation, refurbishment, maintenance, and repairs. Growing demand for aesthetic appearances for various hospitality businesses as well as other commercial buildings will propel market growth for hardware components in the elevator industry.

Which Application is likely to generate the Highest Profits for IoT in Elevators?

According to Fact.MR, predictive maintenance applications are expected to experience major uptake, growing at a CAGR of 13.9% until 2032. A constant stream of data feeds elevator service professionals the tools they need to diagnose and mitigate problems before they arrive on-site, saving time and money which further has stimulated market growth for the predictive maintenance in the market.

Market trends will likely be driven by the installation of a predictive maintenance facility in elevators that monitor heat changes, noise fluctuations, and friction. Further, IoT technology can help reduce the amount of elevator downtime, which will create lucrative growth opportunities in the coming years. Further, escalating demands for power-efficient and secured systems will drive IoT's growth in the elevator market.

By analyzing these changes, maintenance schedules can then be predicted. Technology that keeps up with the deterioration of machines can be a valuable resource allowing anticipatory maintenance to be carried out at the right time and at the right place. As a result of a continuous inflow of data resulting from the IoT enablement of the monitoring devices in elevators, both elevator technicians and equipment manufacturers are able to diagnose problems ahead of time, saving both them and their clients’ time that would have otherwise been lost in testing.

Prominent manufacturers of IoT in elevators are eyeing technological innovations in order to provide smart and AI integrated technologies system solutions to their customers. Through strategic partnerships, manufacturers can increase production and meet consumer demand, increasing both their revenues and market share. The introduction of new products and technologies will allow end-users to reap the benefits of new technologies.

Key Segments Covered in the IoT in Elevators Market Study

What was the market worth for IoT in elevators in 2021?

As of 2021, Fact.MR estimated the IoT in the elevators market to have reached US$ 23.1 Billion

What is the expected worth of the IoT in the elevators industry in 2022?

What is the expected forecast CAGR for IoT in elevators from 2022-2032?

At what value will the market for IoT in elevators close in 2032?

What is the expected market value for the U.S IoT in elevators market?

How opportunistic is the Chinese market for IoT in elevators?

China is expected to register a 14.6% CAGR with regard to the IoT in elevators industry

What is the expected growth rate for the U.K market?

U.K is expected to document a CAGR worth 12.9% in the IoT in elevators market

Augmented Reality in Education Market is expected to rise at a CAGR of 80% with demand for AR in K12...