Bearings have transformed numerous industries over the decade. Bearings reduce friction to allow for a more seamless rotation and maintain the correct position of rotating shafts, simultaneously safeguarding the elements that support them.

A bearing can handle a wide range of load combinations; however, the four primary types of application loads are radial loads axial loads, preloads, and centrifugal loads.

To withstand and facilitate a large operation in heavy industries such as energy & utility, railway, oil & gas, construction & mining, and others, large scale bearings are crucial. Such large scale bearings with an inner diameter typically ranging from 100 mm to above 1000 mm play a crucial role in such industries, as bearing failures are responsible for 40 to 50 percent of rotating mechanism failures. Processes and machines have become so complex that the risks of failure or interruption are either too costly or disastrous.

To increase bearing efficiency and lifecycle, market participants are focusing on continual R&D in areas such as IoT functionality, lubrication improvements, and material science. As a result of such advancements in bearing technology, manufacturers can build a transition from present bearings to bearings of the future.

During the 2017-2021 period, the global large scale bearing market registered a CAGR of 0.2%, and according to the analysis by Fact.MR, a market research and competitive intelligence provider, the market is projected to exhibit growth at 6.1% CAGR between 2022 and 2032. 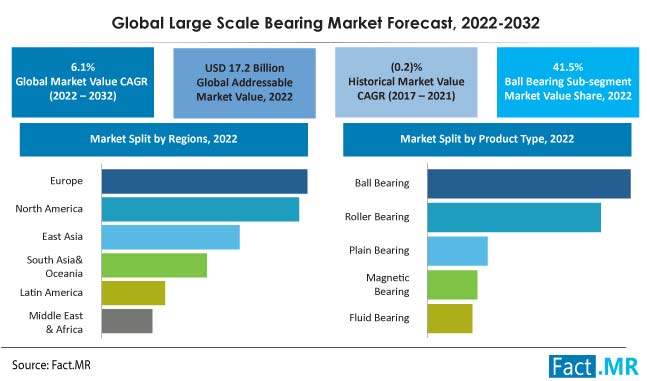 For instance, global electricity demand is rising, which is driving the demand for advanced large-scale bearings in the energy sector that can lead to less maintenance, lower cost, less susceptibility to failure, and longer duty cycle.

Increased global demand from application sectors has prompted industries to increase their production output, thereby supporting market growth of large-scale bearings, which is expected to create an absolute $ opportunity of US$ 3.8 billion through 2032.

Magnetic bearings differ considerably from traditional bearing designs. There is potential for key players to develop solutions that deliver new, critical benefits such as superior speed capability and control in key application areas. Magnetic bearings have the apparent advantage of allowing the spinning shaft to rotate almost free of friction. As a result, the system has less mechanical wear, generates less heat, has no spinning speed restriction, and is more efficient.

All these factors contribute to a long lifecycle, which will limit the demand for conventional bearings. The bigger the current, the stronger the magnetic field, and the bigger load it can support. The load capacity of an active magnetic bearing is quite high, which is attracting end users to implement such bearings in key application areas.

Why is Demand for Large Scale Bearings High in the United States?

The U.S. large-scale bearing market accounts for the largest market share of close to 84% in the North American region and is projected to grow at the rate of 5.4% during the assessment period.

High market growth is attributed to several factors such as growth in industries owing to advancements in production capabilities, favorable government initiatives, and rising demand for large-scale bearings from businesses across oil & gas, energy, railway, and metallurgy, as well as manufacturing industries.

Why is the China Large Scale Bearing Market Growing Rapidly?

Due to the massive growth of end-use sectors in China, such as construction & mining, manufacturing, marine, material handling, plastics processing, etc., market demand is expected to increase rapidly over the assessment period.

Ball bearings dominate the market with 41% market share in 2022. The segment is projected to expand at 6.1% CAGR during the assessment period, owing to factors such as wide dimensional variability, load-bearing capacity, technical integration, and the scope of these bearings that is suitable for several end-use application industries.

Why are Large Scale Bearings Widely Used in Industrial & Manufacturing?

Amongst them, the industrial & manufacturing industry will dominate the market capturing more than 13% market share in 2022.

In the manufacturing industry, ball bearings and roller bearings are utilized at several stages of the production process, while fluid bearings are used in high-precision applications, and magnetic bearings are needed where quieter operations and very low friction are desired.

Apart from this, large scale bearings find usage in the oil & gas industry, which is estimated to hold a little over 12% market share in 2022 and expand at 7.4% CAGR over the decade.

High-performance load-bearing rotor bearings that are capable of operating for a long period under extreme stress are usually required in oil & gas applications. To facilitate the necessary mobility and withstand pressure, ball and cylindrical roller bearings are used in most applications.

The large-scale bearing market is developing rapidly as a result of technical developments made by the industry's main players. Prominent players in the market are focusing on digitally-driven development around rotating shafts.

Further, leading manufacturers of large scale bearings are introducing compact, efficient solutions to improve the working conditions related to contamination, environment, assembly misalignment, vibration, and temperature that would contribute to a longer lifecycle of bearings.

Companies are focusing on hardware-software integration to develop post-process algorithms to ensure precise working conditions and also determine the root cause of faults.

The global large scale bearing market is estimated to surpass US$ 30.9 Billion by 2032-end.